* Fazl says APC will be held in last week of June; overthrowing PTI govt only solution to country's ills
* Bilawal urges opp to stop budget from being passed in NA
* Shehbaz says PTI presented the worst budget in Pakistan's history 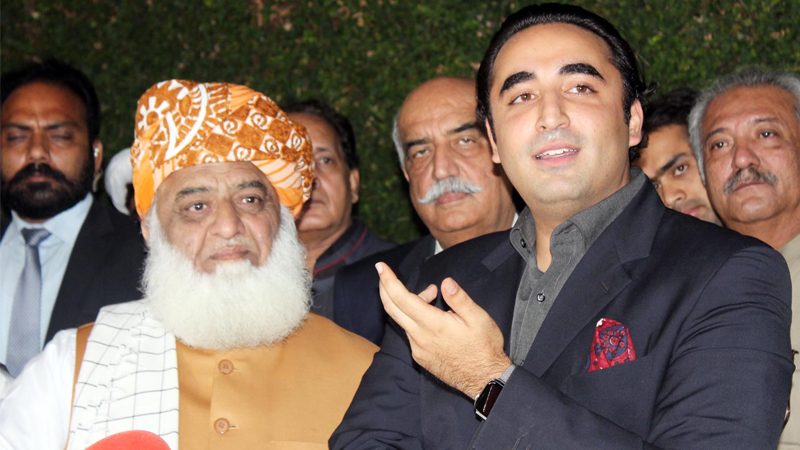 The JUI-F chief called on Shehbaz Sharif to discuss the joint opposition’s APC and the country’s political situation with him. Prior to that, he also sat down with Bilawal Bhutto.

Speaking to media later, Fazl said the APC will be held towards the end of this month, adding that all opposition parties will head forth under a joint strategy. He maintained that the ‘government will have to go’. He said overthrowing the Pakistan Tehreek-e-Insaf (PTI) government is the only solution to country’s ills.

Terming the budget for fiscal year 2019-20 recently presented in parliament ‘anti-people’ and ‘anti-state’, he said the poor will not be able to make their ends meet if the budget is passed in the National Assembly. He alleged that Rs 7.20 trillion budget was prepared by the IMF and not the government. He also spoke on the recent arrests of political bigwigs of the country, saying those indicate that the government wants the budget to be approved without any opposition. Bilawal, on the other hand, said he wants the assemblies to complete their term in any case. Asked about his repeated stance if assemblies should complete their tenure, Bilawal said,

“There is a difference between a government and the parliament.” “Whatever decision is made during the APC will be the collective decision of all,” he said.

The PPP chairman also urged all opposition parties to work together to stop this budget from being passed in the Lower House. He reiterated his earlier demand of issuing production orders of lawmakers who are in custody.

After meeting Fazl, PML-N President Shehbaz Sharif also reiterated that the APC will be held very soon but noted that a date will be announced after everyone is consulted. “We have decided through a consensus that an APC will be called to resolve all the problems of the Pakistani people,” he said. “Imran Niazi stood on a container and painted a bright picture of the future for the people,” he said. “However, in the past 10 months of his prime ministership, his tyrannical measures have made the common people’s life hell-like. The worst budget in Pakistan’s history was presented. We will force the government to rescind this budget,” he vowed.

Earlier in the day, PPP formed a committee to prevent approval of the budget in the National Assembly. According to party sources, the committee decided to contact all political parties in the parliament, including Grand Democratic Alliance (GDA) and Muttahida Qaumi Movement (MQM), two members of the PTI-led ruling coalition. The committee will hold talks with members of different political parties in the National Assembly.