The Yusuf Buch era has ended

“My soul derives comfort from the belief that the participants in my funeral – whether few or many – will be performing an act of the kind that is known to have earned the pleasure of the beloved Founder of our Faith. Its reward lies only with God.” Ambassador Yusuf Buch wrote to the Imam of Makki Masjid, New York, on May 22, 2009. 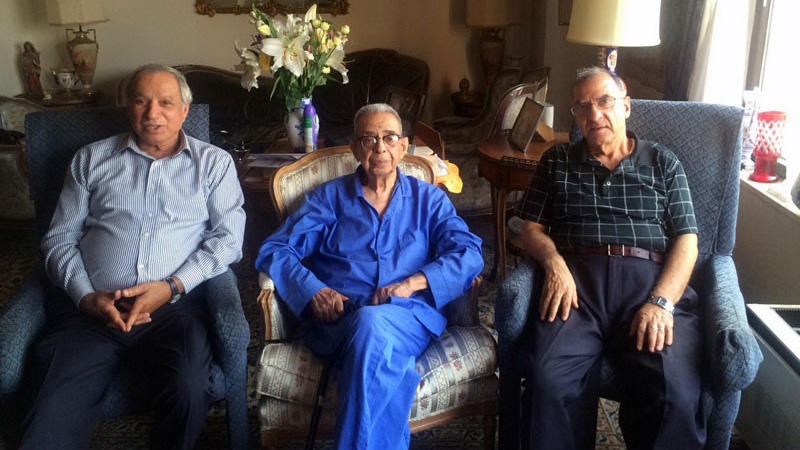 On Friday, May 24, 2019, the nation of Kashmir lost an iconic personality, an intellectual par excellence and a thinker in the person of Ambassador Yusuf Buch. He was not keeping good health lately and had returned to his residence from a hospital three days before his death.

Ambassador Buch was a captivating personality, a person with farsightedness, judgment and judiciousness. A legendary and eminent diplomat, and truly a living encyclopaedia on Kashmir, he rendered his services for upholding human and political rights of the people of Kashmir. He was certainly one of the most recognisable experts on the subject of Kashmir.

The nation of Kashmir honours his illustrious life of courage and salutes his commitment and dedication. We all pay tribute to his inspirational spirit and pay homage to his life in exile because he dedicated his energies for the freedom of his homeland, Kashmir.

Ambassador Buch was born in Srinagar in 1922 when Kashmir was still ruled by a feudal prince under the suzerainty of British colonial power. At the end of his scholastic career, he passed a competitive examination to win a place in what was called the government’s superior service. Soon he became a political prisoner as he was vocally among the opponents of the feudal ruler’s decision to accede to India and to obtain India’s military intervention against a people’s rebellion. That led to his being exiled to Pakistan through an exchange of political prisoners in 1949.

Buch sahib came to the United States in 1953 as a winner of an International Essay Contest sponsored by the United Nations. Later, he ran a Free Kashmir Centre in New York, from 1957 to 1972. He was a member of the cabinet of Zulfikar Ali Bhutto, the prime minister of Pakistan from 1972 to 1977. He was also appointed as Pakistan’s ambassador to Switzerland in 1977.

I remember Buch sahib becoming very passionate while narrating to us the final wish of a dying Kashmiri martyr, who said on July 13, 1931, “Aaseey niboou panin zimadari. Woin chou thuhund faraz aath madad karun” (We tried our best to do what we could, now it is on your shoulder to move the movement forward.”)

Buch sahib’s message to the people of Kashmir in general, and to the youth in particular, was to hold on to the cause despite the oppression of the occupying forces. Repression cannot be the reason for apathy towards the Kashmir cause. Participation in the freedom struggle should be the second nature of the Kashmiri youth.

Buch sahib was absolutely firm in saying that the world powers do not have the right, nor the slightest moral authority, to pronounce what should be the solution of the Kashmir dispute in the sense of the final disposition of the territories involved. They have a compelling duty to deliberate upon and recommend how a just solution can be achieved.

It was Sunday, January 21, 1990 when I had my first meeting with Ambassador Yusuf Buch at his residence in New York City. I knocked on the door at 10 Waterside Plaza. The security guard sought the permission from Buch sahib, and he let me in. After greeting me, Buch sahib offered me a cup of coffee.

We spent a few hours together. I was very impressed to see a selfless and a highly educated diplomat of Kashmiri origin in the cabinet of the United Nations Secretary General. He was informed, statesmanlike, poised, and engaging. He told me that the will of the people of Kashmir must prevail whenever the parties, India and Pakistan, reach a final settlement of the Kashmir dispute.

It was during this meeting that Buch sahib insisted that I must remember the following:

1. Never ever be late to a meeting. Be on time.

2. Dress up in neat and clean clothes. People you meet with will think more highly of you.

3. Never ever exaggerate the events in Kashmir. Why exaggerate when the facts are on our side?

4. Highlight that the Kashmir dispute is the only international dispute where the solution to the problem was suggested by the parties concerned, India and Pakistan.

It is often forgotten that the Security Council and its commission did not themselves conceive the ideas and prepositions that were embodied in their resolutions. Had they done so, there would have been an element of imposition, however benign, and India, never betraying any lack of ignorance, would have questioned why she should have to abide by the principles originated by others. Actually, however, the two governing principles of the agreement the Council obtained – one, the decision of the status of Kashmir according to the people’s will as impartially ascertained and, two, demilitarisation of Kashmir prior to that ascertainment – were exactly those that formed the common ground in the submissions made to the Security Council by the parties (India and Pakistan) themselves even when they made conflicting allegations about each other’s conduct.

While meeting a senior official of the United States State Department who suggested that the LoC be considered an international border, Ambassador Buch told her that the suggestion partitioning the State of Jammu and Kashmir between India and Pakistan along the Line of Control may have some attraction for the ignorant and the unwary as well as for those who wish to settle the dispute on India’s terms. First, as the LoC does not run through Kashmir-the Valley falls entirely on one side of it – the suggestion seeks to gift the territory in dispute, lock, stock and barrel, to India, and to dismiss the respective claims of either Pakistan or Kashmir with an air of third party impartiality.

Second, it purports to partition of a mythical entity, the State of Jammu and Kashmir, while it seals the fate of an actual living people, the people of Kashmir. Third, the suggestion is obviously mistaken about the LoC. This line does not represent any kind of provisional border negotiated at any point between India and Pakistan; on the contrary, it is but a glorified term conferred on the line demarcated in 1949. That line, truthfully described as what it was, the Ceasefire Line, was drawn under the aegis of the United Nations Commission preparatory to the withdrawal of forces by the parties, and holding of the plebiscite jointly agreed by them. It was meant to keep the fighting stopped while the parties proceeded to further steps towards conclusive peace. Most people in the Valley look upon the LoC as the Line of Conflict; only a few can imagine that any peace loving person or group or state would wish to perpetuate it.

When a United States senator asked Buch sahib how to find a solution of the Kashmir dispute, the latter had the clarity of vision about the future of Kashmir. There were no ifs and buts in his approach. He was bold enough to say it loud and clear: “A principal source of confusion in approaches to the problem is the heterogeneity of Jammu and Kashmir; the so-called state consists of as many as five regions, each with its own ethnicity and orientation. No solution will have any democratic validity or justice if it does not allow each region to decide its future without being under the pressure of another. Considering this, the modality of a single plebiscite lumping all the regions together needs to be replaced by another method of consulting the popular will in each region. Actually, this involves no radical departure from the course of action envisaged in the proceedings of the United Nations; in fact, a representative appointed at an early stage by the Security Council itself, Sir Owen Dixon, had proposed a regional plebiscite.”

Buch sahib once told me that a clarification was necessary here because the question could be raised as it is raised vociferously in India as to what is so sacrosanct in the United Nations resolutions that a member state is bound to carry them out even to its detriment. This is taking a position which, apart from its appalling global implications, forgets that what is involved here is not implementation or non-implementation of the United Nations resolutions. What is involved is the fulfilment or breach of international agreements. Once two parties signify their unreserved acceptance of proposals jointly submitted to them regarding their mutual dispute, they enter into an international agreement governing the settlement of that dispute. The agreement becomes more binding when the right of a third party – herein Kashmir – are involved. There can be no two opinions that adherence to, and fulfilment of, international agreements is one of the essentials of a stable international order. Nothing but chaos would be the world’s lot if this principle were cast aside.

Buch sahib told Dr AR Meer, an eminent Kashmiri American physician, that the principles and instruments that Kashmiris invoke for the redress of the wrongs inflicted on them were not conceived and inspired solely by their religion. They call for adherence to principles that are recognised by the UN Charter as basis to a peaceful and stable world order. Documents the Kashmiris rely upon were not drawn in mosques. They were composed by western hands in the Security Council of the United Nations.

He also underscored the importance of the United Nations’ Charter for the settlement of Kashmir and other international problems. The Charter is not a scripture or a book of morals, but a multilateral treaty as binding on the largest or most powerful member states of the world organisation as on the smallest or the weakest. Sanctity of international agreements must remain one of the bases of a sane and stable international order. The Kashmir issue involves that principle most pointedly.

Buch sahib once said that the Kashmiri people’s sustained resistance to Indian occupation of Kashmir underlined the fact that they never wanted to be a part of India. Had there been any popular support in Kashmir for joining India, the dispute over Kashmir would have lasted for a year or so at the most. Despite India’s brutal tactics to subdue them, Kashmiris hardly showed themselves as resigned to Indian occupation. Some discontent notwithstanding, Kashmir never felt considered itself a part of India before 1947, and feels even less so after its forcible seizure by Indian troops.”

He was very resolute in saying, “Yes, we have made errors, we have miscalculated, we have not organised our campaign with the care it should have been. We can correct our mistakes, but we cannot forsake our goals. Those have been sanctified by the blood of our martyrs, and the tears of the bereaved among us have put them beyond compromise.

Buch Sahib never compromised on the basic principles of the Kashmir dispute. When he was laid to rest at the compound of the mausoleums of Mirwaiz Yusaf Shah and KH Khurshid, former president of Azad Kashmir, in the capital city of Muzaffarabad, his headstone reads: “Ambassador Muhammad Yusuf Buch resisted the Indian occupation of Kashmir till his very last breath and never compromised.”

The people of Kashmir will never forget the selfless contribution and the tireless efforts of Ambassador Yusuf Buch. His efforts will remain forever a milestone in the history of the freedom struggle of Kashmir. With the passing of such a noble soul, who was a symbol of humanity and a champion of human rights, it is the end of an era. We will miss him greatly.

The writer is secretary general of the World Kashmir Awareness Forum