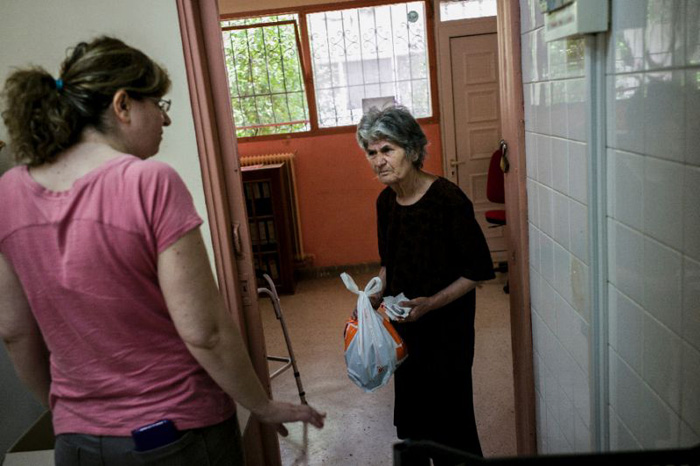 When Greeks go to the ballot box on July 7 in early elections, unemployment and recovery from a near-decade crisis will be the main battleground between the outgoing leftist government and the resurgent conservatives.

But in the favela-like neighbourhood of Perama, haphazardly built on the hills above the bustling port of Piraeus, there is unlikely to be a difference no matter who wins.

In this working-class neighbourhood of 25,000 people that overlooks the port’s oil tanks and container terminals, the jobless rate is close to 80 percent among shipyard workers, one of the main sectors of local employment.

Construction, the second most important source of work, was also hit hard by the crisis.

Even after four years under Prime Minister Alexis Tsipras and social benefits handed out by his leftist government, “the poor have remained poor,” says Vassiliki Padeliakou, a local resident.

Pavlos Tassimakis lives here with his wife and five children in a small two-bedroom house that he built himself.

After 12 years without a regular job, the grizzled 51-year-old former truck driver has long ceased to receive unemployment benefits.

“We are seven at home, and we receive 640 euros in state support every two months. It is obviously not enough to survive on,” says Pavlos, who has had to moonlight as a removals driver, earning 15 euros ($17) per trip, to make ends meet.

His wife Paraskevi is also out of a job after fleeting stints as a town hall cleaner in nearby Korydallos. The family has no health insurance and cannot pay for after-school preparatory courses which most Greek pupils need to pass end-of-year exams.

They also owe over 600 euros in unpaid bills to the electricity company, which has led to power cut threats.

“I don’t see how life can improve in Perama. What kind of future can our children look forward to? There is no work, no future here,” says Pavlos’ wife Paraskevi.

Their daughter Evangelia, who is 15, wants to study law and get out of Perama. And perhaps out of the country too.

After officially exiting its third bailout nearly a year ago, Greece under Tsipras has slowly returned to growth of 19 percent of output in 2018.

But in June, official figures showed unemployment inching up to 19.2 percent from 18.5 percent in January.

In May, the New Democracy conservative party of Kyriakos Mitsotakis beat Tsipras’ Syriza party by over nine points in European parliament elections.

This unexpectedly large defeat prompted the prime minister to announce early elections on July 7, three months ahead of schedule.

Analysts believe that the electoral backlash faced by Syriza is partly due to additional taxation piled on middle classes already weakened by the crisis.

Ahead of July 7, Mitsotakis leads Tsipras in all recent polls.

Both leaders have promised to create more jobs over the next four years.

At the town hall of Perama, deputy mayor Panagiotis Karagiannakis, a former shipyard unionist, is acutely aware of the difficulty facing his constituents.

“The problems began in the 1980s when port activity declined, owing to competition from neighbouring countries such as Turkey where the cost of labour was lower. With the global crisis, from 2008 onwards, the shipbuilding sector has been completely destroyed,” said Karagiannakis, who has himself also experienced a long period of unemployment.

“The population has become poorer since the crisis. The Greek economy is improving but in Perama, the situation remains critical and that is why the mayor decided to set up in December a social grocery store and a soup kitchen,” he adds.

At the soup kitchen organised by the town hall, nearly a hundred people wait for lunch every day.

Vassiliki Padeliakou, 62, is one of the beneficiaries. In the last nine years she has only worked on two eight-month contracts, not enough to earn unemployment benefits, or a pension.

A few years back, Vassiliki worked in the port customs office. Now, she survives on the charity of friends and neighbours.

“When I hear the government congratulate itself on its social policy, I am ashamed. The welfare state in Greece remains non-existent!” she sighs.

“I do not know how manage to survive … I live from day to day, with the help of the town hall, neighbours, or restaurants who give me leftovers,” she says.