The race to win the US Democratic primary: where does it stand? 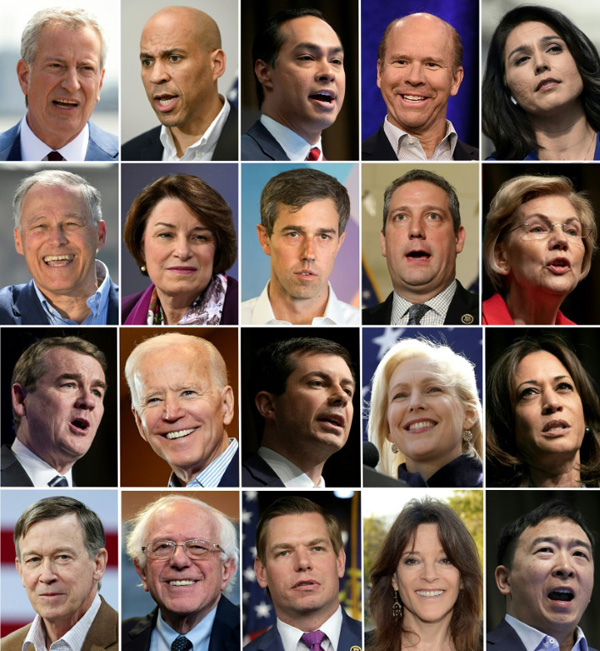 A record 23 Democrats of diverse genders, races and political backgrounds are lining up to try to stop Republican US President Donald Trump from winning a second term in the 2020 elections.

Though much will change in the more than 500 days to go before polls open, a nationwide Fox News poll released this week showed former vice president Joe Biden leading the pack.

Here are five questions and answers as the campaign season in the United States begins:

How will it play out?

While the field will certainly shrink once the first votes of primary season are cast in Iowa in February, some candidates may call it quits after debates begin later this month.

An unprecedented prime-time broadcast from Miami awaits: over two nights, June 26 and 27, millions of Americans will tune in to the highly-anticipated debut debate of the cycle.

The Democratic National Committee set lenient standards for the special event broadcast live on NBC News, MSNBC and Spanish-language Telemundo, meaning a whopping 20 candidates — 10 per night — will be squaring off in what is likely to be an unwieldy event.

Three lower-tier hopefuls failed to meet the selection criteria, which were based on polling and a candidate’s number of unique donors.

The second debate, broadcast July 30 and 31 on CNN, will follow similar guidelines.

The months that follow are expected to see a further winnowing of the field as debates raise their thresholds for participation. Candidates who fail to draw new supporters and get squeezed out of media exposure could quickly lose steam.

Iowa opens the voting, with its famous first-in-the-nation caucus set for February 3, and eventually a nominee will be officially named at the Democratic National Convention held July 13-16, 2020 in Milwaukee, Wisconsin.

Who are the top contenders?

Four other Democrats were also more popular than the president, according to the Fox News poll.

Besides that group, ex-congressman Beto O’Rourke is also seen as strong competition.

But the primary could be full of surprises, as any candidate, including the underdogs, could have a breakout moment in the debates.

There is unprecedented diversity in the race: six women, three African-Americans, a Latino, a Hindu of Samoan heritage, an Asian-American tech entrepreneur, and the first openly gay major candidate are all in the field.

What issues are they running on?

Expanding health care, defending reproductive rights, fighting for a higher minimum wage, protecting the environment, reducing gun violence and reining in Wall Street are already among the top issues Democrats are addressing on the campaign trail.

In 2016, Sanders waged a primary battle against Hillary Clinton, losing but moving ideas widely perceived as too radical, such as universal health care, to the mainstream among many Democrats.

Several candidates including Biden are bringing a more centrist vision, and the result could be a vigorous battle of ideas between progressives and moderates.

One topic is expected to dominate the debates: Trump himself. The prospect of launching impeachment proceedings against him has already divided Democrats, with Warren and Sanders urging that path while Biden has tiptoed around the issue.

Can Biden hang on?

Months before entering the race, Barack Obama’s former right-hand man already led in the Democratic polling, and from the start he has sought to appear above the fray, declining to tangle directly with his top Democratic rivals.

Analysts have said that strategy could quickly come unglued.

He is seeking to win the primary of a party that has become more left-leaning than the one he represented as a longstanding US senator and then vice president.

The political veteran has already been forced to revise his stance on abortion access.

He will also be pressed to defend several votes he cast during more than three decades in the Senate that are facing 21st-century scrutiny and rein in his affectionate physical campaign style, which several women have publicly said made them uncomfortable.

What are progressives’ chances?

Progressives Sanders and Warren are second and third in the polls, respectively, and that suggests a heated battle on the left to attract voters in the primary, and to challenge centrist Biden.

The 77-year-old Sanders, still popular after his 2016 run, maintains a lead over his Senate colleague, but Warren, who turns 70 next Saturday, has cut into his poll advantage.

Will her rising star be able to eclipse Sanders? The latter fiercely defends his “socialist” moniker, while Warren has insisted she is a capitalist who opposes corporate monopolies and “markets without rules.”