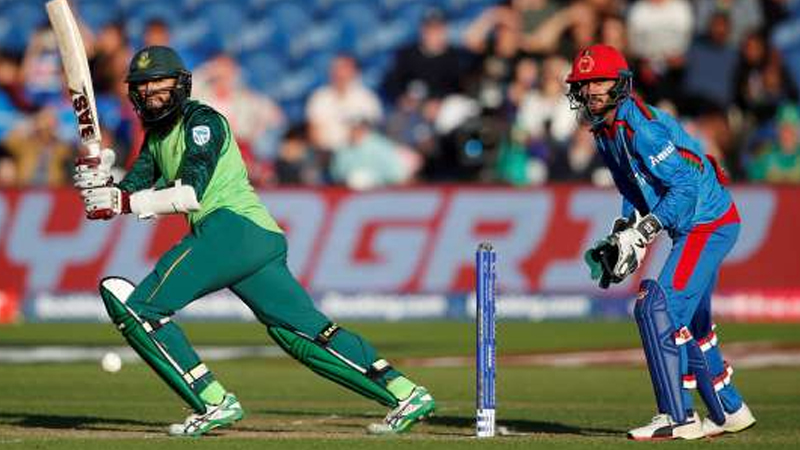 South Africa finally got a World Cup win under their belts as they eased to a nine-wicket triumph over Afghanistan on Saturday to keep alive their hopes of reaching the semi-finals. Leg-spinner Imran Tahir took 4-29, engineering an Afghani collapse after a 75-minute rain break as they were dismissed for 125. Chris Morris contributed with figures of 3-13 and Andile Phehlukwayo took two wickets. The South Africans set about chasing a slightly adjusted target of 127 from 48 overs in cautious fashion, reaching 131-1 with 19 overs to spare.

Hashim Amla and Quinton de Kock shared a 104-run opening wicket partnership before De Kock was dismissed for 68. Amla finished on 41 not out and Phehlukwayo hit a six for the winning runs to end unbeaten on 17. After three defeats and another game called off because of rain, Saturday’s match was always going to be a big chance for Faf du Plessis’ South Africa team to get their first win. But they still looked sloppy in the opening overs as Afghanistan dealt well with the new ball and were 69-2 when the teams went off for rain. When they came back, however, they lost four wickets for the addition of one run in two overs, with Phehlukwayo taking the wicket of Mohammad Nabi and Tahir striking with his first delivery as he bowled Noor Ali Zadran for 32.

Tahir claimed a second victim four balls later and the wickets tumbled regularly after that. “We planned a lot for their seamers but not so much for him and credit must go to Imran for his spell. He bowled very well in the right areas,” Afghanistan captain Gulbadin Naib said. A cameo of 35 from Rashid Khan took Afghanistan into three figures before he became Tahir’s fourth victim. “I knew I wouldn’t get it to turn but I tried to vary it and get the batsmen to make mistakes. It came out well and I’m really pleased that I played my part for the team,” said Tahir after being named man of the match. After their poor start to the tournament, South Africa effectively need to win their remaining four matches, starting with New Zealand in Birmingham on Wednesday, to make the last four.