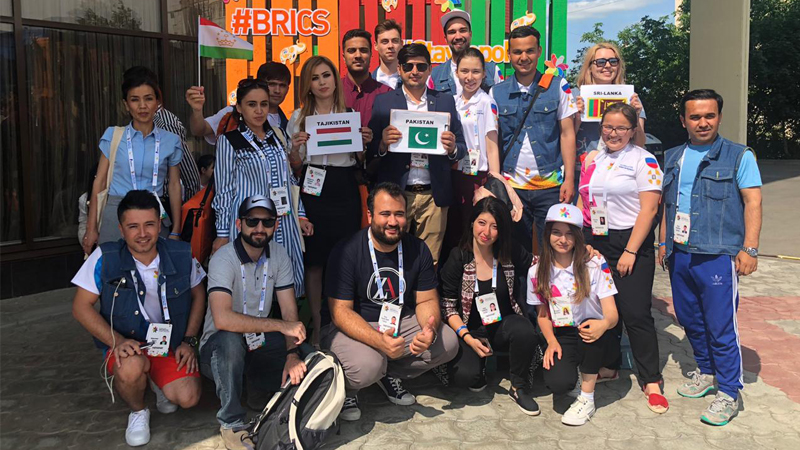 The delegation of Global Youth Clan participated in Shanghai Cooperation Organisation (SCO) and BRICS Students Spring Festival which was organised by Russian Union of Youth in collaboration with Federal Agency for Youth Affairs, the Federal Agency for the Commonwealth of Independent States and government of the Stavropol Territory.

Russian President Vladimir Putin sent greetings to participants, organisers and guests of the 3rd SCO and BRICS Students Spring International Festival in Stavropol, which marks the beginning of Russia’s Presidency in the Shanghai Cooperation Organisation.

“Your major forum fully reflects the aspirations of young people from various countries to develop professional and personal contacts, and their readiness to work together in a businesslike manner. The festival programme features a whole range of substantial, interesting events that, I am sure, you will enjoy and that will be useful to you. You will also be able to experience the genuine friendliness and hospitality of Stavropol Territory residents. I am confident that your festival will contribute to the development of international people-to-people interaction, as well as to the strengthening of friendship and harmony between people. It will help further improve the constructive partnerships within BRICS and the SCO.”

The names of the best creative youth in the world at the Art Hall platform, which combined several directions: music, dance, original genre, and amateur art were also named. The Grand Prix of the festival was won by the dance group ‘Dance cod’ from the Krasnodar Territory, the team of universities of the Republic of North Ossetia-Alania, Avais Kazmi from the Republic of Pakistan, Gleb Kim from the Kyrgyz Republic, ‘Black X’ from the Saratov region of the Russian Federation, ‘Theater of Russian costume fashion’ from the South Ural State Humanitarian-Pedagogical University of the Chelyabinsk region of the Russian Federation.

At the end of the ceremony, the national anthem of the BRICS and the SCO was performed by the thousandth children’s choir, and a huge balloon was launched into the sky depicting the flags of the countries participating in the event. The headliner of the festival was American hip-hop artist Akon.

The organisers of the Festival are: the Federal Agency for Youth Affairs, the Federal Agency for the Commonwealth of Independent States, compatriots living abroad and for international humanitarian cooperation, the government of the Stavropol Territory, the Russian Union of Youth All-Russian Public Organization.