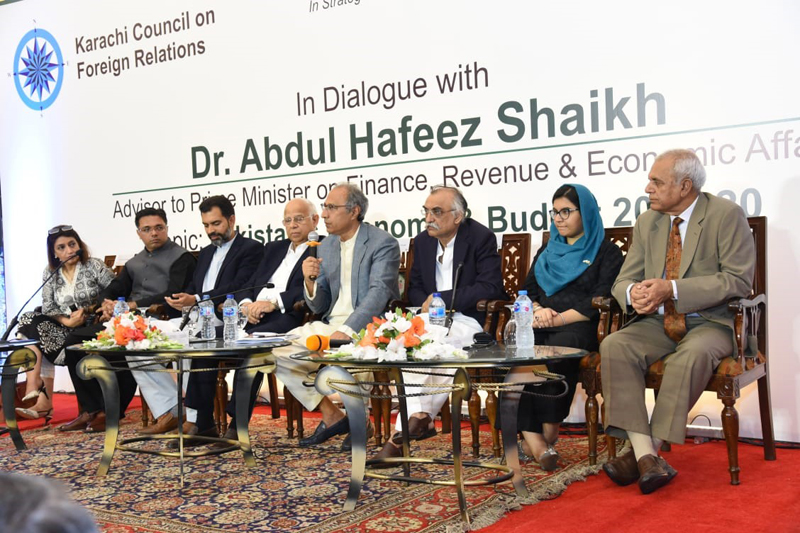 In the past 70 years, Pakistan’s economy has failed to improve due to the inconsistent economic policies of past governments, said Adviser to the PM on Finance, Revenue and Economic Affairs Dr Abdul Hafeez Shaikh on Friday.

He was taking part in a dialogue on the federal budget organised at the Karachi Council on Foreign Relations (KCFR). Federal Board of Revenue (FBR) Chairman Shabbar Zaidi, State Bank of Pakistan (SBP) Governor Dr Reza Baqir, KCFR Chairman Ikram Sehgal were present. A large number of business leaders, senior government officials, bureaucrats and journalists were also in attendance.

The finance adviser explained the salient features of the federal budget to the audience. During the speech, he talked about Pakistan’s economy and the recently presented budget. “A country is known by its people and what they sell to others. This remains the responsibility of the of the private sector. In the past 70 years, unfortunately only few elected governments have completed their tenure. We have not been able to do business with others and have been unable to make international alignments,” he said.

He further shared statistics on current economic situation in Pakistan. “Sadly, in the last five years, Pakistan’s export growth rate has been 0%. Approaching the International Monetary Fund (IMF) was the only solution, which had to be adopted. The present government is paying back the interest on the loans taken by past governments,” he said.

While talking about budget, he said everyone had to contribute to achieve the set revenue target of Rs 5.5 trillion.

“Exporters have been allowed maximum tax rebates. The government has taken the initiative to control the expenditure as much as it can. Some of the major initiatives taken in this budget are: freezing budget in many fields, including that of the armed forces, not increasing the salaries of senior officers and reducing the PM House’s expenditure by 30%,” he said.

Finance adviser says approaching IMF was the only option

He said the government would protect people of Pakistan in every field, including provision of health cards to the poorer segment of the society. He added that an amount of Rs 152 billion would be dedicated to people of FATA and Gilgit-Baltistan, the most under developed districts of Pakistan. He said institutions, especially the State Bank of Pakistan, should be strengthened. He announced that government would not borrow from SBP after June 30, 2019. After his speech, a question answer session was held.

“Economic reforms will increase exports and maximize revenues. As for tax on agricultural sector, it is the responsibility of the provincial governments,” he said while responding to questions.

FBR Chairman Shabbar Zaidi said that income of the middleman had increased up to Rs 100,000. “The government is trying to minimise the cost of tourism equipment and the PM is personally focused in the growth of the tourism industry,” he said, while responding to a question about tourism development.

SBP Governor Raza Baqir said that all efforts would be made to improve the country’s economy. He asked overseas Pakistanis to look for opportunities to serve the country. “The SBP’s present goals are to keep a firm hand on economic situation of Pakistan and modernisation. The exchange rate is a tool to control inflation in country. If the government stops borrowing, the SBP will have a huge impact on the economy,” he said.

He appreciated the suggestion to bring an export policy for all industries regarding tax exemptions, currently only five industries were availing this tax free facility. The participants appreciated Dr Hafeez Shaikh, Shabbar Zaidi and Dr Reza Baqir for explaining the government’s point of view.