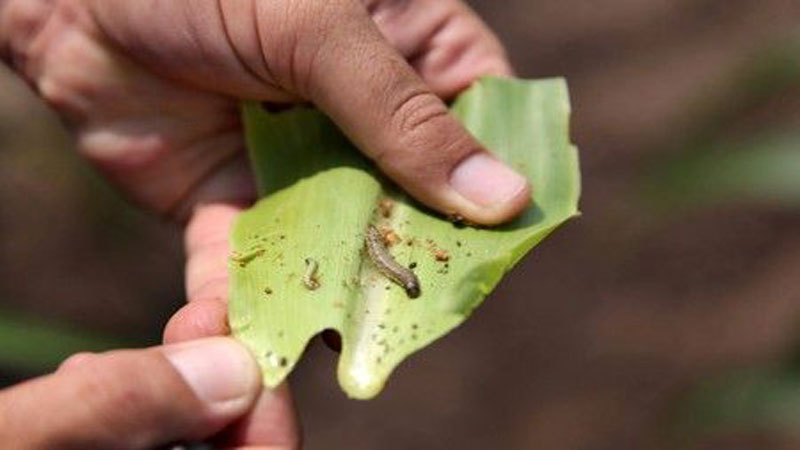 Taiwan is on “high alert” for further damage by the fall armyworm, said Premier Su Tseng-chang on Tuesday, after the island reported its first sighting of the invasive pest in a corn field.

The fall armyworm, which has spread rapidly across Asia in recent months, was found in Miaoli county on the island’s northwest coast on Saturday, said the Bureau of Animal and Plant Health Inspection and Quarantine (BAPHIQ) in a statement on Monday.

The bureau is also investigating reports that the pest may have reached Yilan county and Chiayi county in the northeast and southwest of the island, respectively.
Speaking to reporters on Tuesday, Su said the government had set up an emergency response team to deal with the pest, but he also urged the public to help spot and notify authorities of suspected cases.

“Please help us prevent it. The threat is greater than African swine fever,” he said, referring to the deadly disease spreading through Asia’s pig populations.
News that the pest had reached Taiwan comes as it continues to invade neighbouring China, reaching 18 provinces and regions since the start of the year, and threatening to soon arrive in the mainland’s key grain regions in the north.

Armyworms, which feast in large numbers on the leaves and stems of many plant species, can infest and damage hundreds of hectares of crops overnight.
The pest may cut Taiwan’s yield of wheat, corn, sorghum and rice crops by 20% to 30% and affect 45% of the planted area of the crops, Feng Hai-tung, head of BAPHIQ, told reporters on Monday, according to a report by official news agency CNA.

Taiwan produces small amounts of wheat and corn, relying heavily on imports, but produces most of the rice it consumes.

The affected crops will be destroyed to prevent the spread of the worm, said the BAPHIQ statement. The bureau has also issued a list of 11 pesticides to be used to tackle the pest.

The government has in addition set up 500 pheromone traps across the island to reduce the fall armyworm numbers and strengthened border quarantine measures and inspections.

If the insect arrives in large numbers, it could severely damage sweet corn and rice fields on Taiwan, and sorghum and wheat fields on Kinmen island as well, causing an annual loss of up to NT$3.5 billion ($112 million), said the CNA report, citing the Council of Agriculture.