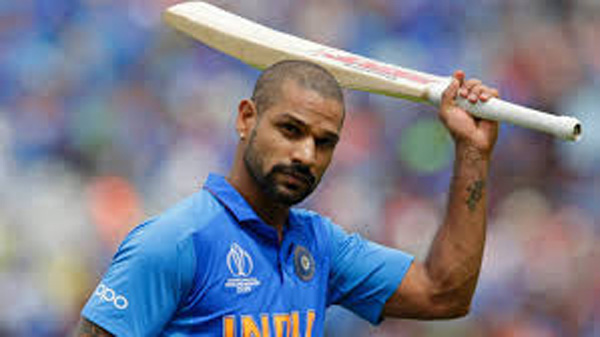 A hand injury suffered in the match against Australia has thrown Shikhar Dhawan’s further World Cup participation into doubt but the in-form opener will remain with the team, the Indian cricket board (BCCI) said on Tuesday. Dhawan was batting on 24 when a Pat Cummins bouncer hit him on the back of his left hand in the region between the index finger and thumb during the game at The Oval on Sunday. The left-hander braved the pain and made a match-winning 117 as India beat the defending champions by 36 runs.

Dhawan did not field when Australia were chasing and was seen with his hand in an ice pack in the dressing-room. “Shikhar Dhawan is presently under the observation of the BCCI medical team,” the BCCI said in a statement ahead of Thursday’s match against New Zealand. “The team management has decided that Mr Dhawan will continue to be in England and his progress will be monitored.” The board did not elaborate how many matches Dhawan would miss but his absence is a serious jolt after a smooth start to India’s bid for a third 50-overs World Cup title.

Dhawan was the top scorer in both the 2013 and 2017 editions of the Champions Trophy and he exhibited his fondness for English conditions with another century on Sunday. In his absence, back-up opener KL Rahul, who was picked to bat at number four though he came at sixth against Australia, is set to partner Rohit Sharma at the top of the order. It would then be a toss-up between wicketkeeper Dinesh Karthik and all-rounder Vijay Shankar to fill the number four spot.

Dhawan’s absence denies India a left-right combination at the top of the order and also leaves them without any left-hander in their batting line-up. Dhawan and Rohit have forged a formidable opening partnership with 16 century stands in ODIs, behind only compatriots Sachin Tendulkar and Sourav Ganguly who shared 21. Australians Matthew Hayden and Adam Gilchrist also shared 16 century stands in one-day internationals. Former Test spinner Harbhajan Singh said India should consider flying in wicketkeeper Rishabh Pant in case Dhawan had to be replaced.

“This is a big blow…If anything goes wrong with Shikhar Dhawan for more than three weeks, I’d want to pick Pant,” he told India Today channel. Former England batsman Kevin Pietersen also backed the selection of Pant, who is known for his six-hitting prowess. “Get Pant on the plane ASAP. KL Rahul to open and Pant at number 4,” he tweeted.