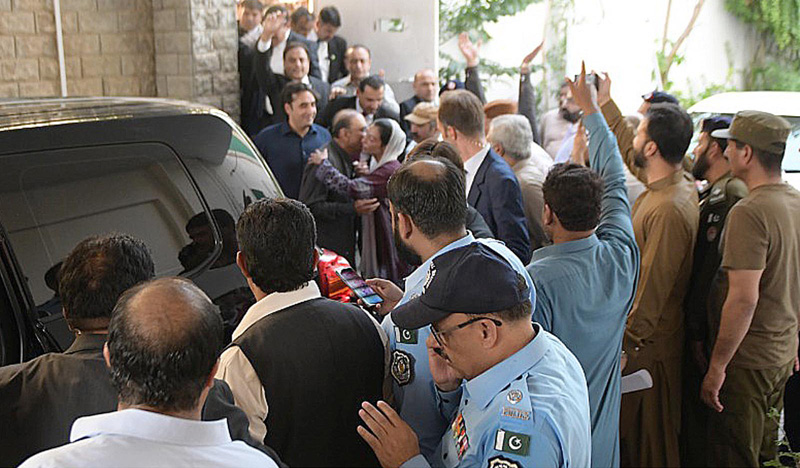 A team of the National Accountability Bureau (NAB) on Monday arrested Pakistan People’s Party (PPP) Co-chairman Asif Ali Zardari after a court rejected the plea for interim bail filed by the former president and his sister Faryal Talpur in the fake bank accounts case.

A team of NAB officials reached the Zardari House in the federal capital soon after a bench of the Islamabad High Court (IHC) comprising Justices Amir Farooq and Moshin Akhtar Kayani dismissed the appeals of both the petitioners.

The court room number 3 was packed with PPP senior leadership, lawyers and journalists. During the course of the hearing, NAB Additional Prosecutor Jahanzeb Bharwana assisted the bench.

“Let a bail hearing remain just that … do not turn it into a trial hearing,” Justice Farooq said while telling the NAB lawyer to only mention any details missed during the arguments rather than recapping the whole case. The NAB prosecutor argued that as per the standards set by the Supreme Court, bail cannot be granted in this case.

Representing Zardari, Farooq H Naek argued that all documents submitted by NAB state that the alleged fake accounts were opened by the Omni Group. None of the documents prove that Zardari opened any of the suspected accounts, he added.

After almost three hours of initial hearing, Justice Amir Farooq reserved the decision. Both Zardari and Talpur left the court building as the two-member bench reserved its verdict. Later in the orders issued, the IHC dismissed the bail plea and allowed the NAB to arrest Zardari and Talpur, both of whom, now, have the option to appeal the order in the Supreme Court.

A number of party workers as well as two of Zardari’s children – PPP Chairperson Bilawal Bhutto and youngest daughter Aseefa – saw the former president off as he left from Zardari House in Islamabad to the NAB Rawalpindi office in a black bulletproof vehicle.

The vehicle carrying Zardari entered the NAB office in the capital’s Melody Area through the rear door whereupon a team of doctors conducted a medical check-up of the former president. The report of the medical check-up will be presented in the court on Tuesday (today). The PPP leader, on the other hand, will be presented in the court today to seek a remand.

Reports said the NAB had already informed the National Assembly speaker through a letter that it was going to execute the warrants against Zardari issued by the NAB chairman.

In a post-arrest press conference, former prime minister Yousaf Raza Gilani told reporters that there was no resistance during the event and that the NAB officials were properly let into the Zardari House.

“They talk about Rs 4.5 billion but the amount, in fact, is Rs 15 million and that went to the Zardari Group, which is a proper entity,” he said. “Till 2013 [the year till which he was the president], he had resigned, he had no relation to the Zardari Group’s administrative, executive or financial affairs, and there are no fake accounts,” he added.

“The Omni Group has acknowledged that and noted that it opened different accounts and this [account] was Omni Group’s international account,” Khosa said. “When he became the president, he stepped down from the directorship of the Zardari Group and this is in the records of the SECP [Security and Exchange Commission of Pakistan],” he continued. “We already had the bail so how can the NAB warrants override the court orders. We were advised to go to the high court and so we asked to show us the order. This is based on ill intentions,” he stressed.

“Do you know who created the NAB? It was [former president General (retd) Pervez] Musharraf who made it for political engineering,” Khosa said and further went to stress that Zardari is a peaceful citizen of Pakistan and he voluntarily surrendered. “He said he is obligated to the law and if they want to arrest him, he will oblige and go with them,” he quoted Zardari as saying. “The PPP has always respected the law,” he concluded.

The cases are part of the investigations being conducted by NAB in pursuance of the Supreme Court’s verdict in the money laundering of billions through fake accounts case wherein it forwarded the joint investigation team (JIT) report with directions to investigate and file references.