“Tax payers and non-tax payers will not be treated equally”: Firdous 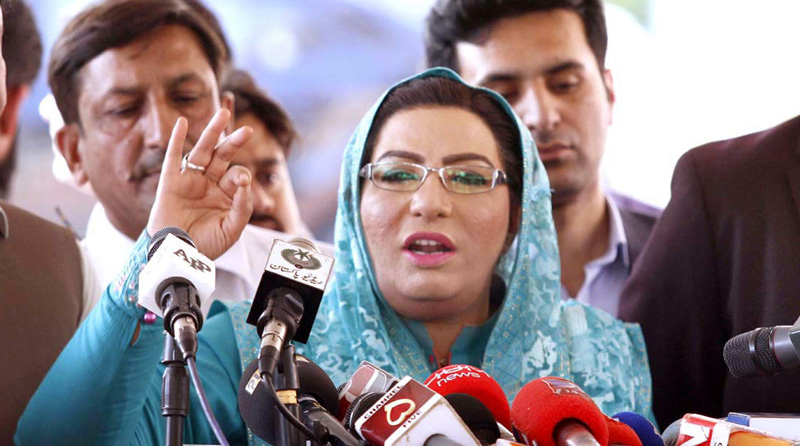 Special Assistant to PM on Information and Broadcasting Dr Firdous Ashiq Awan on Monday asked industrialists, traders and general public to respond positively to the Prime Minister’s appeal to the nation, by declaring their assets and becoming part of tax reforms agenda.

She said that former rulers Nawaz Sharif and Asif Zardari had taken loans for buying personal properties abroad whilst Imran Khan had to borrow for payment of loans, taken by previous rulers. She lamented that whenever opposition was asked to explain their past misdeeds and corruption, they started making personal attacks on the Prime Minister.

On one hand, the Opposition claimed that their projects were being replicated by the present government, while on the other; they criticize the same projects which reflected their double standards in politics. She advised the Opposition party leaders and their spokespersons not to sing songs of “Corruption Kings” but raise voice for the rights of the poor people. She said that leaders of Opposition parties were facing “collective disease” due to fear of imprisonment.

She said it seemed that Opposition was jealous of people’s trust in Prime Minister Imran Khan and added it did not want the country to make economic progress as improved economic scenario would make them redundant politically. She asked the Opposition leaders to bring their leaders, in-laws and sons from abroad and present them in the courts of law.

The SAPM said it was a proven fact that misleading the nation on the floor of the House was Sharif family’s old habit. Nawaz Sharif’s mis-declaration in Parliament was eventually exposed in the court and the country’s apex court had declared him a liar, she added. She said that raising finger towards Imran Khan was meaningless.

“Tax payers and non-tax payers will not be treated equally “, she said while talking to a private news channel. She urged the nation to pay taxes for stabilizing the deteriorating economy of the country and “we should change our mind sets in this regard.”

She vowed that the government will not tolerate people living luxurious life while remaining outside the tax net, adding, the VIP Pakistanis were the people who were paying Tax and the government would facilitate them. The Special Assistance said people who don’t pay taxes were being unjust to others. Tax collection had vital importance in the economic progress of the country and without reforming the tax culture, economic progress could not be achieved, she added.

Replying a question, she said with focus on socio-economic uplift of the poor and a corruption-free society, the PTI government had set a direction to turn around the country’s economy through effective policy initiatives in diverse areas.

She said the handicapped were badly ignored during the past 70 years history of the country but credit goes to the PTI government that it has made the projects of comprehensive welfare for them. Firdous Ashiq Awan said special persons must be facilitated in the future and all country institutions in federal capital will facilitate them with special assistance as well.