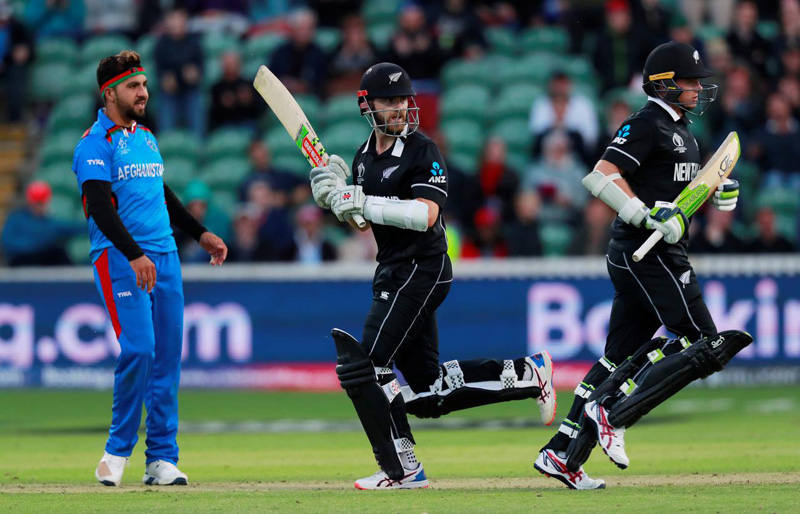 New Zealand cemented their spot at the top of the cricket World Cup league table with a seven-wicket victory over minnows Afghanistan thanks to a unbeaten half-century by Kane Williamson and fine bowling by their seam attack led by Jimmy Neesham. The Kiwis, despite losing Martin Guptill first ball of their innings, never looked in any serious trouble chasing a paltry 173 for victory at Taunton as Williamson and Ross Taylor shared a century partnership for the third wicket before getting home with more than 17 overs to spare. It was the Kiwis’ third consecutive victory and puts them in pole position for the semi-finals, while Afghanistan have recorded three straight losses. “The team have put together some strong performances, but it is important that you just move on and look forward to the next challenge,” Williamson told a press conference. Williamson top-scored with an unbeaten 79 after surviving a missed run-out chance on 22. He hit nine boundaries in his 99-ball innings.

Earlier, Afghanistan’s batting woes continued after their openers got them off to a brisk start’ with openers Hazratullah Zazai and Noor Ali Zadran putting on 66 by the 11th over. But man-of-the-match Neesham, who took a ODI career best 5-31, and Lockie Ferguson (4-37) then grabbed four wickets for four runs to reduce Afghanistan to 70-4. They never recovered and lost wickets steadily before being bowled out for 172 with nearly ten overs to spare. “We did some bad shots, so we didn’t play 50 overs…we just missed some overs,” Afghanistan captain Gulbadin Naib told reporters. Neesham, a 28-year-old allrounder, almost quit the game last year after a loss of form but was then recalled for the World Cup. Afghanistan next travel to Cardiff to play South Africa on Saturday while New Zealand play India at Trent Bridge on Thursday.