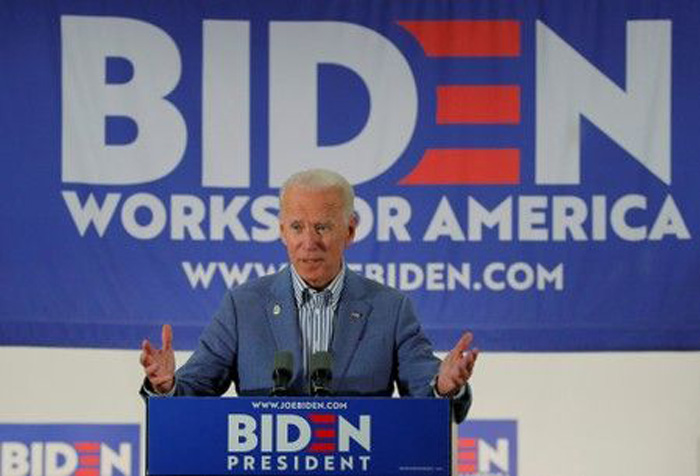 The Joe Biden Express to the 2020 Democratic presidential nomination went a bit off track this week.

Since Biden joined the race in April, his campaign has worked to craft an aura of inevitability around the former vice president’s bid. Biden has engaged President Donald Trump more often than his Democratic rivals, while speaking in broad, thematic outlines rather pinpointing policy.

To a large extent, the strategy has succeeded. Biden enjoys a comfortable lead over his 23 competitors – drawing 31% of support from Democratic and independent voters compared to the 14% received by second-place U.S. Senator Bernie Sanders in the Reuters/Ipsos poll this week – and remains the favourite to battle Trump in the November 2020 election.

But as Biden increasingly has to stake out policy positions, he finds himself under fire from progressives in the party — and has shown a willingness to bow to demands that could hurt him with more moderate voters.

Facing intense criticism from liberals and abortion-rights groups, Biden on Thursday suddenly reversed himself on the Hyde Amendment, a law that prohibits federal funds for most abortions. After 40 years of supporting the measure, Biden, a Roman Catholic, announced at an event in Atlanta that he now opposed it.

Earlier this week, Biden rolled out a climate-change plan that was more ambitious and far-reaching than many expected. It came after weeks of progressives openly fretting that his plan would seek some sort of “middle ground” in an attempt to mollify labour unions and other industry groups concerned about the economic impact of a massive shift away from fossil fuels.

In both cases, Biden was not necessarily speaking to his loyal base of supporters, the largely middle-aged and middle-of-the-road voters – many of them union members – who came out to see him in New Hampshire this week.

Instead, he was courting the groups he needs to consolidate his grip on the nomination: the activists, progressives and millennials who right now have the louder voices in the party.

Biden’s chief antagonist has been Representative Alexandria Ocasio-Cortez, the first-term congresswoman from New York who is not running for president but who commands a fervent following on social media. She called out Biden on both his climate and abortion positions.

Biden also is being knocked around more by his fellow Democratic candidates, who finally were given an opening to distinguish themselves from the front-runner on an issue key to the party’s base. His past support of the Hyde Amendment was blasted by Senators Kamala Harris and Elizabeth Warren, among others.

Biden added to the confusion about where he stands on the issue during the event in Atlanta by saying he would make “no apologies for my last position” on the amendment.

While he cited aggressive anti-abortion laws passed in states such as Georgia for his shift, his language fuelled outrage among progressive women on Twitter who argued the law had prevented poor women from obtaining abortions for decades.

Campaign aides for Trump’s reelection told Reuters last month they expected Biden to be pulled leftward as the Democratic primary progressed, and they were prepared to exploit that should it occur.

On the campaign trail, Biden at times appears caught between a lifetime of centrist and often bipartisan policymaking and the pull of the progressive tide.

At an event on Tuesday in Concord, New Hampshire, he continued to defend the 1994 crime bill he helped craft as a senator that has been criticized by Harris and other candidates for resulting in the disproportionate jailing of African-Americans.

“You’ve been conditioned to say it’s a bad bill,” he told a questioner, a young woman who called herself a “civil liberties voter.”

Unlike several other Democratic candidates who have already called for the U.S. House of Representatives to initiate an impeachment inquiry against Trump, Biden has held back, saying that it should only happen if Trump continues to stonewall committee probes.

“It’s a gigantic distraction from things we should be focusing on getting done,” he said.

It remains to be seen whether Biden has suffered any damage from tacking leftward on some issues.

Some voters in New Hampshire made clear they did not want Biden to cater to the party progressives.

“I honestly think the progressives are in many ways hijacking the Democratic Party. The 60 or 70 percent of us who are in the middle get left out of the mix,” said Jeff Brown, 57, of Weare, New Hampshire. “And I think the vice president hears our voices, and I think he’s the one who is going to represent us.”