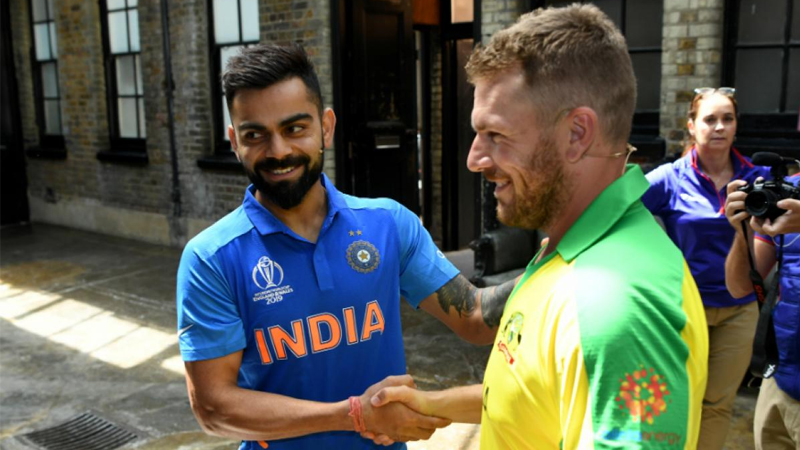 Finally, we can focus on the real deal. A wet, dull and gloomy Friday cancelled training sessions and saw off-the-field non-news grabbing headlines and being blown out of proportion. Fortunately, all that changed on Saturday, the eve of the India – Australia clash at the Oval. The sun was out, the forecast improved, and the teams were back in training.

That’s how it should be, for Sunday will see two fierce rivals with rich historical, and recent, rivalry take on each other. Australia have had the better of the two in World Cup history — the broadcasters too are marketing the game on those lines — but the contest couldn’t be more even now. India are ranked higher in ODIs after a consistent run over the last two years. Australia, who seemed down and out last year, have lifted their game right in time for the World Cup. The see-saw fortunes have been on display this year. India defeated Australia in Australia. Australia defeated India in India. Both sides are unbeaten in this World Cup, with Australia playing two and India one.

India identified their best combination in the very first game, and in the process set themselves a template. Early wickets with the new ball, check. Spinners among the wickets in the middle overs, check. Pacers back in action in the death, check. Top order batsman batting through, check. Jasprit Bumrah, Yuzvendra Chahal, Kuldeep Yadav, Rohit Sharma – all up and running early. Such victories early in the tournament are bound to make the side confident about their game plan. Australia, meanwhile, come into the game on the back of a hard-fought win. They were 38 for 4 – bounced out by the big West Indian pacers – before Steve Smith’s experience and Nathan Coulter-Nile’s adventurous knock bailed them out. They were under pressure in the defence too, but Mitchell Starc’s five-for ensured a close win. Such victories early in the tournament will lift spirits in the side.

As cliched as it sounds, how the teams begin in the game could well decide the end. Australia got away against West Indies after a poor start but that’s unlikely against India. West Indies didn’t have spinners to strike in the middle overs. India have Kuldeep and Chahal, who both have had success against Australia in the past. But flip it around, and things look bright for Australia. If they can negotiate Bumrah and Bhuvneshwar Kumar, they are known to attack India’s spin duo. Australia score quicker off Chahal and Kuldeep than any other side, but whether they can do that with both operating in tandem is to be seen.

India too can ill-afford to have a poor start, for they have some middle order concerns. The small target set by South Africa meant their middle order wasn’t tested, but that could come into play against Australia. Fortunately for them, their key players in the top order have terrific records against Australia. Rohit’s average against Australia is 61.87, around 12 more than his career average. Between Virat Kohli and Rohit, there are 15 centuries against Australia with the captain scoring eight of those. But not many of those have come when both Starc and Pat Cummins have operated together, and that’s what makes the battle hard to call.

The pitch for the game is the same as the one used in the tournament opener between New Zealand and Bangladesh which saw spinners enjoying success. The fact that it was covered due to steady rain on Friday would have made it damp, but the grass was largely shaven off 24 hours before the game. For all the talk around pacers from both sides, we could see plenty of cutters and slowers ones like in the tournament opener. If that’s the case, India’s bowling attack could be better equipped to exploit conditions. It’s unlikely that either side will make changes to their winning combination, although Australia’s top order had a wobble. A few months earlier, India would have gone into the game as clear favourites. But the see-saw fortunes since the start of the year makes this a tough game to call. The last week has seen a few close games spicing up the World Cup after a slow start, and the India – Australia clash could only make it better.