Five weeks of violence has driven nearly 300,000 people from their homes
The Syrian government and its Russian backer have turned to a familiar tactic in their assault on Idlib: striking residential areas 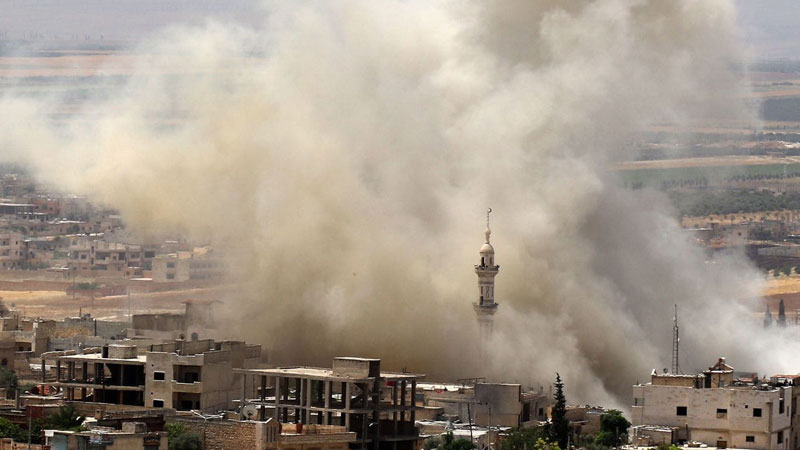 The father could hardly bear seeing his 18-month-old daughter’s panic every time the Syrian government warplanes flew over their home. Every day for a month, she ran to him to hide in his arms, tearful and breathless.

Abdurrahim had refused to flee his hometown throughout years of violence, and he was determined to hold out through the new, intensified government offensive launched in April against Idlib province, the last significant territory held by Syria’s rebels.

But now he had his first child, Ruwaida, to think about.
“That look on my daughter’s face … is really what is going to kill me,” said the 25-year-old Abdurrahim, who asked that his last name not be published for security reasons.

His determination collapsed when an airstrike on May 30 pulverized the house next door, crushing to death three children, one of them a girl Ruwaida’s age. He whisked his daughter and wife to a nearby village, hoping it would be safe.

The Syrian government and its Russian backer have turned to a familiar tactic in their assault on Idlib — relentlessly and systematically striking residential areas, hospitals, markets and infrastructure to break the will of the population and pressure people to flee, according to observers, rights groups and residents.

It’s a tried-and-true method that worked for President Bashar Assad’s forces in their previous, destructive campaigns that retook the city of Aleppo in 2016 and other strategic territories.

Striking civilians with impunity has been so characteristic of the 8-year civil war that it rarely even raises much international outrage or attention. Monitors say the pattern of strikes clearly show that, far from being collateral damage, civilian homes, businesses and infrastructure are intentional targets of the government.

“Even wars have rules,” said Misty Buswell, the Middle East advocacy director for the International Rescue Committee, adding that two hospitals it supports were hit by airstrikes. In this war, she said, attacks on civilians “have happened with absolute impunity.”

The impact has been brutal in the rebel enclave centered on Idlib in northwest Syria on the border with Turkey. Some 3 million people are bottled up there, more than half of them displaced from other parts of the country recaptured by the military.

The Syrian military launched its assault in April, backed by government and Russian airstrikes. It has focused on the enclave’s southern edges, taking a few villages and bombarding deeper into Idlib.

Bombing “targets everything: bakeries, hospitals, markets. The aim is to stop all services to civilians. Everything,” said Wasel Aljirk, a surgeon whose hospital was blasted by strikes.

Five weeks of violence has driven nearly 300,000 people from their homes. Many are living under olive trees, in tents or unfinished buildings, cramming in overcrowded shared rooms. Aid groups fear that figure could spiral to 700,000 displaced.

More than 300 civilians have been killed, according to opposition activists and war monitors. At least 61 children are among those killed since April, according to Save the Children, though Idlib health authorities put the figure at 75 children killed in May alone.

Hospitals and clinics have been systematically bombarded, some of them hit more than once even though the UN identifies many to the Syrian government as health centers.

At least 32 hospitals and health facilities around the enclave have been put out of service, either because they were struck or suspended their operations for fear of being hit, Mustafa Al-Eido from the Idlib health authority said Thursday.

The south Idlib region most directly under attack does not have a single health facility left, after all 16 there were hit by airstrikes or stopped working, Al-Eido said.

That has put an extra burden on those in other parts of Idlib and forced long journeys on patients, said Mohammed Katoub of the Syrian-American Medical Society, which supports services in the area.

Bombings are so frequent that many hospitals are built buried into the sides of hills for protection, known as “cave hospitals.”

One such cave hospital, a major trauma facility in southern Idlib, called Pulse of Life, was hit by airstrikes three times in the past two years, each time moving to a new location. Every month, it served 5,000 patients and performed 500 operations.
The fourth and final strike came May 5 when at least seven rockets pounded the hospital. Direct hits raised massive clouds of earth, gravel, stone and concrete dust into the sky, seen in video posted online.

No one was hurt because the staff had evacuated after being tipped of an imminent strike, said Aljirk, the surgeon. But Pulse of Life was virtually destroyed and has not been able to reopen since.

In general, the government has a blanket justification for indiscriminate bombing of rebel-held areas, describing the entire population as “terrorists and their families.” It further backs its pretext by pointing to the fact that Al-Qaeda linked militants and other jihadi groups have come to dominate the Idlib enclave, which first fell under rebel control in 2015.

Physicians for Human Rights has said the war in Syria has seen the most widespread and systematic assault on health care documented in the world to date. It has counted at least 566 attacks on health facilities since the start of the war, mostly by government forces or their allies.

The strike on the house of Abdurrahim’s neighbors, the Qasheet family, was part of a major barrage that rained down on residential areas on the town of Maarat Numan, destroying six houses in a single day.

Dust was still in the air when the team of first responders known as the White Helmets arrived, said Obada Zakra, a leader of the team. They first focused on survivors in a nearby house while neighbors worked to dig out the Qasheets’ two-story home. The father, mother and one son emerged alive though a gap in the debris. Another son was pulled out hours later, bloodied but alive.
But the building was pancaked on top of 14-year old Abboudi Qasheet, his two sisters, and younger brother.

Neighbors say Abboudi was a local celebrity because of his sweet voice, which he used to call for prayer. He was pinned face down, blood under his nose, with the weight of the house’s wreckage on his back. His father wailed as the rescuers tried to free the body.

Abdurrahim said when he saw the children under the rubble, “I imagined my daughter there.”

“We say we get used to the sound of the warplanes — to console ourselves,” he said. “But no one gets used to death.”

He and his family fled, but within two days they came back in Maarat Numan, after the village where they took refuge was also struck by warplanes.

“To be displaced and leave your home is not an easy matter,” he said. “Those who remain here prefer to die than that humiliation.”