Will ‘fight to the end’ in trade war with US: China 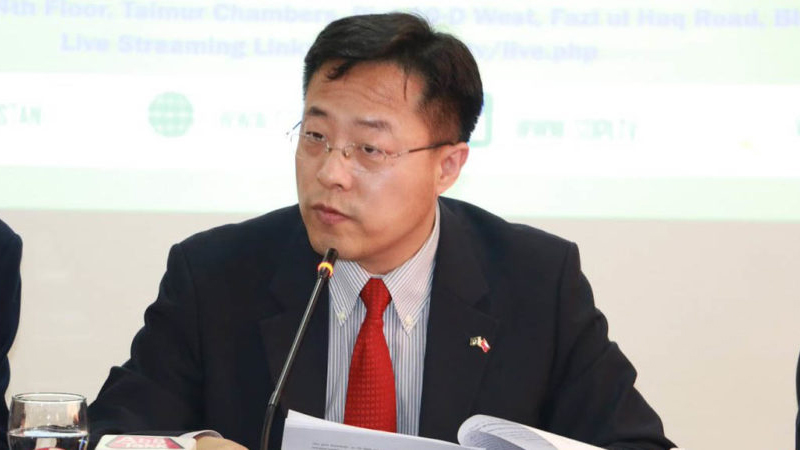 China believes in dialogue to resolve mutual difference but is ready to fight to the end if any attempts are made to push it to the wall vis-à-vis ongoing trade war with the US, said Chinese Embassy Deputy Chief of Mission Lijian Zhao in his address at an Iftar dinner hosted at the embassy premises.

“First, there has been no change of position as far as China is concerned. China addresses differences through dialogue and consultation, because this is in the interests of not only China and the US but also the international community. In the face of the US threats to raise tariffs, China still sent a high-level delegation to the US for talks as agreed, out of consideration for the bigger picture and showing sincerity and goodwill,” he said in his address. “But, at the same time, China takes a firm stance on safeguarding its legitimate interests. As differences emerge in any negotiations, twists and turns are inevitable. But, the two sides should respect each other, treat each other as equals and strive for a mutually beneficial deal,” he maintained.

“China does not want a trade war but it is not afraid of one and will fight one if necessary. If the US is willing to negotiate, the doors for negotiations are open. If US will resort to unfair pressure, China will fight to the end. The recent announcement on countermeasures is proof that China is fully prepared,” Zhao asserted. “What a responsible big country should do is to stop thinking about ‘America First’ at the expense of others,” he added.

“Secretary Pompeo who has been trying to mislead the public by willful lies is now attempting to incite an ideological conflict. This is totally illogical. Ideological differences do not necessarily obstruct economic, trade, industrial, technological cooperation. US government, either Democrats or Republicans, has been all along working with CPC-led Chinese government in advancing, expanding and deepening mutually beneficial cooperation in various fields, which has brought tangible benefits to business sector and consumers,” Zhao said.

Regarding Chinese Vice President Wang Qishan’s visit to Pakistan, Zhao said it remained very successful. “During the visit, he met with president and prime minister. His visit was meant to send a strong message to the international community that China-Pakistan relationship is an exceptional one,” he said. He said during the visit, the two countries launched four mega development projects in the fields of energy, technology and education under China-Pakistan Economic Corridor (CPEC). “Under the first project, a transmission line of 660kv will be laid between Matiari and Lahore to transmit power from coal based plants located at Thar, Port Qasim and Hub. The project will have the capacity to supply 2000 MW with 10 percent overloaded capability for two hours,” he revealed.

“The other project is Rashakai Special Economic Zone (RSEZ) which will promote industrialisation through optimally priced, world-class industrial infrastructure in Khyber Pakhtunkhwa province. The RSEZ is situated centrally in the CPEC at the junction of Karakoram Corridor and ML-1 development corridor. It is set to become, and will be designed, to be the key trade and logistics hub connecting Kashgar, Kabul and Gwadar on the Belt and Road, and be a high-end host of international commercial, technological and manufacturing hub,” he continued.

“The two countries also inaugurated the Confucius Institute at the University of Punjab in Lahore. The institute mainly provides Chinese education, cultural promotion and cultural exchanges and other projects and activities,” he went on to add. “Huawei Technical Support Center to be established in Pakistan as part of Chinese tech giant’s commitment to make massive investment in Pakistan was also launched during the visit,” he added.

He said Pakistan and China also signed five MOUs during the visit, including Chinese grants of ¥1billion for social sector, ¥40million for disaster relief, framework agreement in agriculture, agreement on MFD (mouth & foot disease) and MOU between CMEC, Balochistan government and Lasbella University.

“In Lahore, the visiting Chinese dignitary had fruitful meetings with provincial governor and the chief minister. He also visited Haier Ruba SEZ. Wang is a student of history and is very interested in the Gandhara art and Mughal history. He visited Taxila museum and Jaulian site. He also visited Lahore Fort and Badashahi Mosque during his stay in Lahore,” he added.