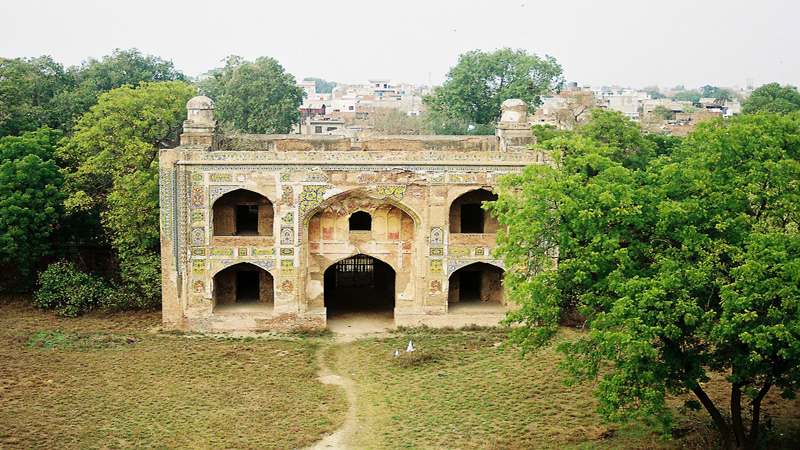 The road on the right of Singhpura Chowk is called Whitman Road. In the start of this road, we find the bungalow of Mian Mairaj Deen. A short distance away, there is the main drain. On the left of this drain there is a huge pond of filthy water. If this pond is drained and a proper excavation is carried out, we could still find many lost gems and pieces of our history.

At the end of the main drain, towards the right we find apartments of ‘Apna Ghar Scheme’. Opposite this is the imposing boundary wall of Loco General Store. In the centre of this building there is a narrow street which is covered with metal grating. This narrow street leads to the tomb of Ali Mardan Khan.

The second approach is from ‘Ichihara Canal’. Moving from the canal towards Jallo Park, we come to the bus stop of Pir Sadiq Shah. On the left there is a road. The surrounding area is called Griffin Park. On the right side of the road there is railway crossing. On the left we find ‘Whitman Road’. A short distance down the road towards the right there is Apna Ghar scheme and on the left, loco store building. In the midst of this building a narrow lane leads to the tomb of Ali Mardan Khan. No one could imagine that obscured by tall scrap dumps, there is a lost gem of history. Walking down this narrow street one comes across a small intersection. On the right there is the tomb and on the left we find the shrine known as Mian Hamid Qari’s Khanqah. Moving ahead one comes face to face with the impressive building of Ali Mardan’s tomb. This place is visited at times by one or two students. In addition to that local people keep visiting off and on. These people know Ali Mardan as a saint and call him ‘Pir Ali Mardan’. They don’t acknowledge him as a General or a lord of the Mughal Court. They come here for praying and to ask for their desires to be fulfilled. The door in the street is opened only on Thursdays. Who knows how long even this door will keep opening.

The high, majestic building of the tomb has three storeys and is dome shaped. The local people firmly believe that the third story is haunted and is abode of ‘Jinns’. As soon as one enters the main gateway one finds some steps leading upwards. All the four entrances are flanked by steps. The podium of the tomb is surrounded by ponds like the ones found in the mausoleums of Jahangir and Asif Jah. Some steps lead down to the basement. The basement is home to three graves. While two of them belong to Ali Mardan Khan and his mother the third is probably of some close relative. All the three graves are covered with green cloth as it is customary to cover the graves of saints and revered figures with green cloth as a sign of respect. The grave of Ali Mardan Khan carries a headstone which was affixed after the original was lost. The inscription reads, “Couplet on the date of passing, Nawab Ali Mardan Khan, Son of Ameer Gunj Ali Khan. Noble lord of the Emperor, the councillor of the Exalted. Mardan Khan was the eulogist of Ali and a man who had reached the truth. As he started his journey from this temporary and insignificant world to the everlasting one. A voice proclaimed that the date of the high ranked Ali Mardan Khan is. 1066 AH

The high, majestic building of the tomb has three storeys and is dome shaped. The local people firmly believe that the third storey is haunted and is an abode of Jinns. As soon as one enters the main gateway, one finds some steps leading upwards. All the four entrances are flanked by steps

This inscription is in Nastaleeq but the original was in the ancient Persian script that was in use at that time. A few lamps are also placed near the headstone. All the four sides of the basement have long and deep ventilators to ensure easy passage of plenty of sunlight and air. In many places we can see closed off passageways that were once used to go to other places nearby but they have been sealed shut with mud and lime plaster. The majestic domed ceiling of the tomb is visible from the ground floor and one can still see remnants of the exquisite art that once adorned this glory but sarcophagus on the floor is almost gone .The steps from the ground floor lead up to the third storey. The ceiling of the third and the last storey is also domed. On the eight sides there are eight exquisite turrets. Four are quite dilapidated but the rest are in a comparatively better state. Every turret stands on four pillars. Intricate mosaic work can still be seen at some places in these turrets. The strong structure of the tomb still stands tall even after facing the wrath of centuries.

Outside there is a huge dusty ground which is overrun with thorny shrubs and weeds. This ground is overlooked by a gateway which is locked from the other side. On the other side of this gateway are the living quarters of the Railway Employees. The elegance and beauty of this gateway show glimpses of the splendour of the gateways of Jahangir’s tomb. The latticed windows and arched passages of the majestic gateway are still clinging to their former glory.

Along with other problems a big issue with this tomb is that of accessibility. Up until a few years ago it was opened only on Thursdays for the general public. This area falls under the jurisdiction of the Railway Department. Things deteriorated, few years back, when a dispute erupted between the Railway and the Archaeology Departments. All access to the general public remained closed until almost 2015. Matters improved gradually and now people can visit the tomb once a week. 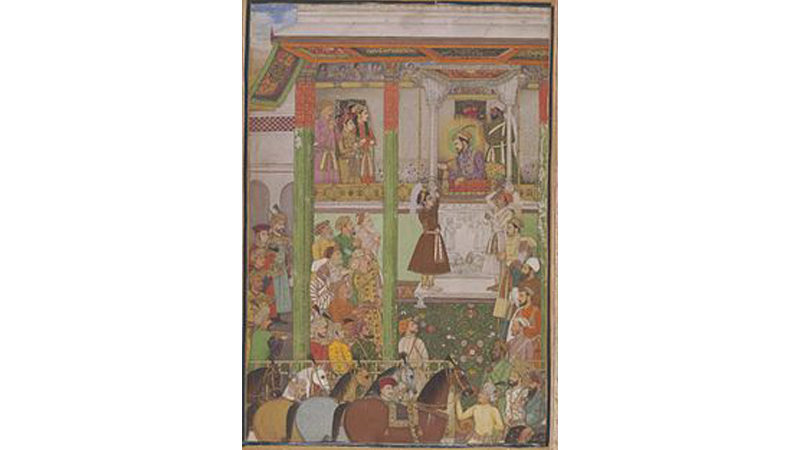 Like other historical monuments this mausoleum is also in dire need of repairs, renovation and maintenance. It’s imperative that the Railway and the Archaeology Departments devise a joint strategy for the restoration and upkeep of this exquisite edifice otherwise it will get trampled under the ruthless feet of the marching times. Death is indiscriminate and devours rich and poor, mighty and the weak alike. Traditions, transcripts or monuments are footsteps that people leave behind in the sands of time and they need to be preserved for posterity.

If I Should Die,” Emily Dickinson

If I should die,

And you should live,

And time should gurgle on,

And morn should beam,

And noon should burn,

As it has usual done;

If birds should build as early,

And bees as bustling go,-

‘Tis sweet to know that stocks will stand

When we with daisies lie,

That commerce will continue,

And trades as briskly fly.

It make the parting tranquil

And keeps the soul serene,

That gentlemen so sprightly