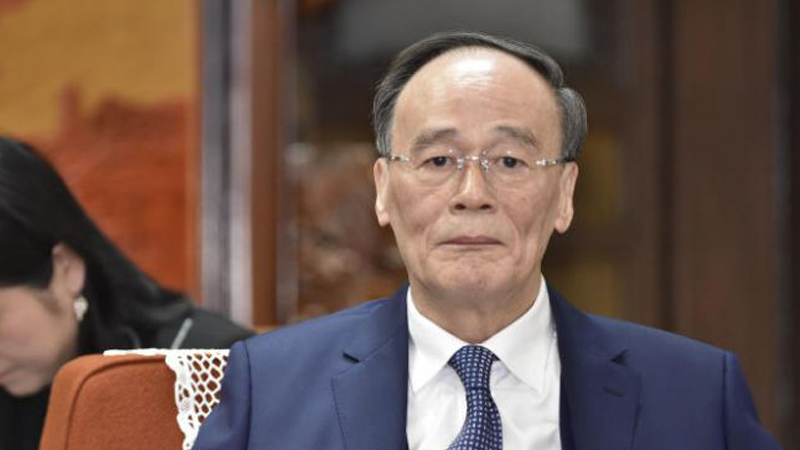 Vice President of People’s Republic of China Wang Qishan will visit Pakistan from May 26 to May 28, according to a statement issued by the Foreign Office on Friday.

Vice President Qishan is a member of the 13th National People’s Congress of China and Central Foreign Affairs Commission, a key foreign affairs body of the Communist Party of China (CPC).

“The visit of the vice president reaffirms the all-weather strategic cooperative partnership between Pakistan and China. The visit is in continuation of high-level exchanges between the two countries, which have acquired an increased momentum since Prime Minister Imran Khan’s visit to China in November 2018 and his participation in second belt and road forum in Beijing in April 2019,” the statement said.

During the visit, Vice President Qishan will call on President Arif Alvi and have a separate meeting with Prime Minister Imran Khan. Pakistan and China will sign MoUs/agreements and inaugurate projects to enhance bilateral cooperation in a broad range of areas during the visit.

“The visit of the vice president underscores the vitality of the time-tested and all-weather relationship between Pakistan and China. It will reinforce the strength of bilateral ties and impart further impetus to the growing, multi-faceted cooperation between the two countries in diverse fields,” the FO statement concluded.

Separately, spokesperson of Chinese Foreign Ministry Lu Kang Friday welcomed the ‘positive interaction’ between the leaders of India and Pakistan, following the Indian elections. “Both India and Pakistan are important countries in South Asia. It is in the fundamental interests of both sides to live in harmony with each other and this is also the common expectation of the international community,” the spokesperson said, while commenting on the report that Prime Minister Imran Khan had sent message of congratulations to Modi on his electoral victory and expressed his desire to promote peace, progress and prosperity in South Asia, and Modi in return also showed a positive gesture.

“The two sides will continue to interpret goodwill and move in the same direction. They will resolve differences through dialogue and work hard to improve relations and jointly safeguard regional peace and stability,” Lu Kang hoped.

According to the spokesperson, Chinese President Xi Jinping has also sent a congratulatory message to Prime Minister Modi. “China and India are important neighbours to each other, and they are both large developing countries and major emerging market countries,” Lu said.