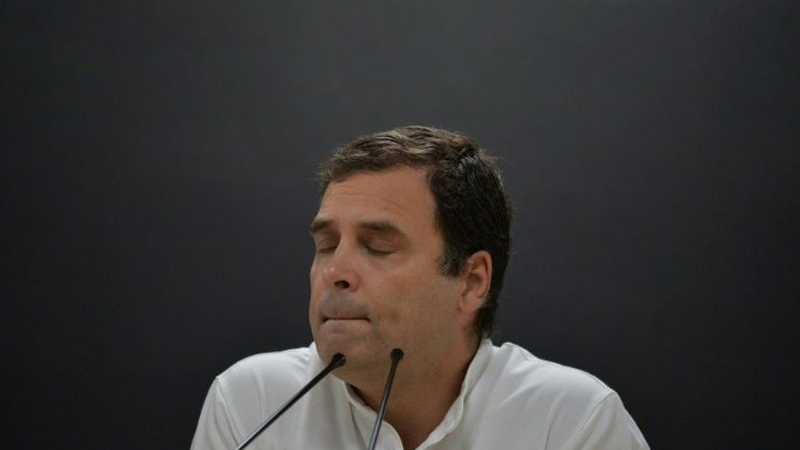 A second straight landslide election defeat for opposition Congress leader Rahul Gandhi raised serious questions Friday about his leadership and cast a damaging shadow over one of the world’s most prominent political dynasties.

Gandhi, who even lost the family constituency seat to the Hindu nationalist Bharatiya Janata Party of arch-rival Narendra Modi, will have to face the music at a meeting of party leaders in coming days.

The election results made grim reading for Congress barons who have relied for generations on the talismanic Nehru-Gandhi name — which rivals the Kennedy clan in the United States and the Bhuttos in Pakistan — to provide electoral success.

The tarnished party was predicted to get about 50 seats, barely improving the historic low 44 it won in Modi’s last landslide in 2014. Congress failed to get a single seat in 13 of the country’s 29 states.

When asked about responsibility for the loss, Rahul Gandhi told a press conference late Thursday: “This is between my party and me. Between me and the Congress Working Committee.”

Party spokesmen have insisted the 48-year-old son, grandson and great-grandson of Indian prime ministers would not resign and that strategy was to blame for the defeat.

“We have to go back to the drawing board,” Congress spokesman Salman Soz told AFP.

But experts say the party and its ruling family is in denial.

“The Congress leadership has clearly failed. It is a discredited and bankrupt leadership,” Kanchan Gupta, a politics expert at the New Delhi-based Observer Research Foundation think-tank, told AFP.

Congress has been a virtual one-family party for the last century. India has been mesmerised by the twists and turns of its successes and frequent tragedies.

His son Jawaharlal Nehru took over and became India’s first prime minister after independence, ruling until his death in 1964. His daughter Indira Gandhi and then her son Rajiv Gandhi –- Rahul’s father — followed as premiers. Both were assassinated in office.

Party fortunes had dwindled since she started to hand the reins to Rahul ahead of the 2014 vote and as Modi turned the BJP into a formidable vote machine, seizing on corruption scandals that hit Congress.

Rahul failed this time to connect with voters in the way that Modi did, critics said. The Nehru-Gandhi name that was once Congress’s biggest asset is now a liability.

The Congress “campaign was a disaster and now their very existence is under question. The more it staggers, the more it helps the BJP,” Hartosh Singh Bal, political editor of Caravan magazine, told AFP.

Modi made hay mocking Rahul Gandhi’s lineage, calling him “shehzada” (prince), which contrasted sharply with his humble origins as a tea seller.

The use of Rahul’s sister Priyanka on the campaign trail did not galvanise Congress votes as expected.

“Rahul’s party may have mobilised crowds for him but he simply couldn’t connect,” said Gupta at the Observer Research Foundation.

Gupta said that Congress’s age-old policy of offering welfare handouts to the poor no longer resonates with an “aspirational India”.

What next for Congress?

“It is pretty much over to the Congress to decide if it wants to shield Rahul Gandhi, like they have done other times,” said Nistula Hebbar, political editor of The Hindu newspaper.

“If they do, the going gets much tougher for the party to revive from its present situation,” she told AFP.

Several big-hitting Indian politicians have defected from Congress over the years because of the Gandhis’ refusal to give up power.

Commentators say there is young talent in the party that should be promoted but they cannot see the Gandhis giving up power.

“It will be very tough for the Gandhis to rebuild from here on,” said Hemant Kumar Malviya, associate professor of political science at the Banaras Hindu University.

“But I don’t think it’s the end of the road for them,” he added.