‘Ice melts’ between Pakistan and India 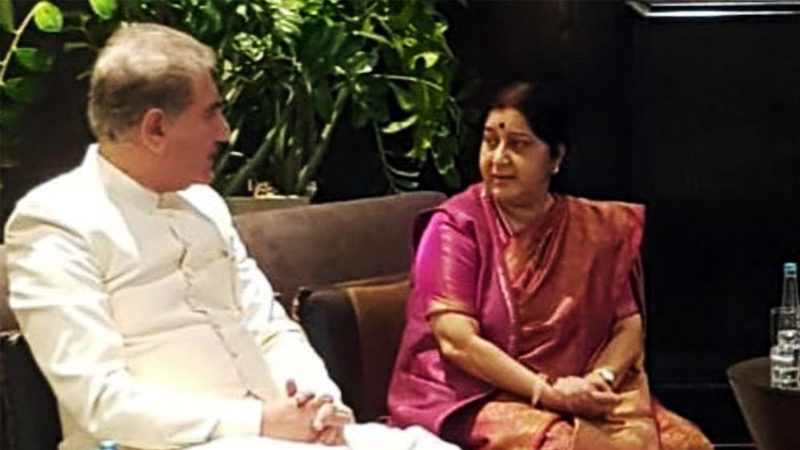 In what appears to be a big sign of melting of ice between Pakistan and India, foreign ministers of the two South Asian neighbours shook hands with each other on the sidelines of the Shanghai Cooperation Organisation (SCO) Council of Foreign Ministers meeting in Kyrgyzstan on Wednesday.

“I made it clear to Sushma Swaraj that Pakistan wants resolution of all issues [with India] through consultations,” Foreign Minister Shah Mehmood Qureshi said after an informal interaction with his Indian counterpart here on Wednesday. “Prime Minister Imran Khan had noted in his first speech that if India takes one step forward, we will take two steps,” he noted. “We are ready for dialogue even today,” he added.

“Swaraj complained about bitter statements and she also brought sweets so we can speak in a sweeter tone,” Qureshi was quoted as saying about the meeting. “We’ve however reiterated our desire for peaceful resolution of all outstanding issues between the two countries,” he maintained.

Earlier, Qureshi was seated next to Swaraj during the meeting of the SCO Council of Foreign Ministers. However, when the foreign ministers gathered to take a group picture, Swaraj switched her spot when she realised that she was standing next to Qureshi. Swaraj’s vacated spot was taken by Russia’s Minister of Foreign Affairs Sergey Lavrov.

Qureshi is visiting Kyrgyzstan to represent Islamabad at the SCO meet. Addressing the plenary session, while linking Pakistan’s future with shared Pan-Asian prosperity, he said an institutional framework among the regional states is important to address common challenges mainly terrorism, poverty and economy through dispute resolution. “Enduring peace and prosperity in South Asia will remain elusive without good faith diplomacy and result-oriented dialogue,” he said.

Qureshi pointed out that South Asia, as part and parcel of SCO, lags behind other regions in terms of regional cooperation, economic integration and connectivity that resulted in formidable challenges including poverty, illiteracy and disease. He said political differences and unresolved disputes among the states have compounded the predicament. On a positive note, he said Pakistan has initiated work on the Kartarpur Corridor to facilitate Sikh pilgrims visit their holy shrine, adding that the ‘Shanghai Spirit’ is being reinforced through the ‘Kartarpur Spirit’.

Qureshi presented a seven-point agenda at the meeting focusing on confidence-building measures among member states, including control on weapon race, establishment of joint fund and international framework to combat corruption and crime. He stressed developing regional consensus to arrest buildup of missile defence systems by individual states or groups of states and to keep outer space free of weapons.

For integrated economy, he called for setting up SCO Development Fund and SCO Development Bank and also finalising proposals for trade in local currencies. He also stressed the need for evolving a comprehensive international framework to fight white collar crime and check production, supply, trafficking and demand for illicit drugs.

Qureshi said leveraging SCO’s institutional capacity can synergise various connectivity initiatives including Belt and Road Initiative, Economic Cooperation Organisation, and Eurasian Economic Union. He also suggested strengthening the SCO Youth Council to promote cultural understanding and said Pakistan looks forward to joining the council soon. He mentioned that as the leadership of SCO member states will meet in June, there is a need to discuss the challenges confronting sustainable growth, environment and collective security. He stressed that the SCO provids an excellent platform for collective endeavours and coordinated approaches.

He mentioned that the SCO region representing 42 percent of humanity, 23 percent of world’s land mass, and 22 percent of global nominal gross domestic product is imbued with the ‘Shanghai Spirit’, aiming the way forward. He said Pakistan is a product of centuries of amalgamation of foreign and local influences along with other SCO states that have been epicenters of civilisation. He highlighted the fast-reaching fruition in shape of the transformational China-Pakistan Economic Corridor and said the geography of SCO region provides an opportunity for air, land and sea links connecting South with Central Asia, Middle East with China, Europe with the Far East, and Eurasia with the sea.

On terrorism, he said Pakistan condemns it in all forms and manifestations including state terrorism against people under illegal occupation and lauded the cooperation under SCO Regional Anti-Terrorist Structure. He mentioned that Pakistan is among one of the few countries to have successfully fought and reversed the tide of terrorism and extremism and is ready to share its experience and expertise with the SCO states through the structure.

The foreign minister said Afghanistan remains central to Pakistan’s efforts to forge lasting regional stability. He called an Afghan-led and Afghan-owned process of dialogue and reconciliation the only viable way forward.