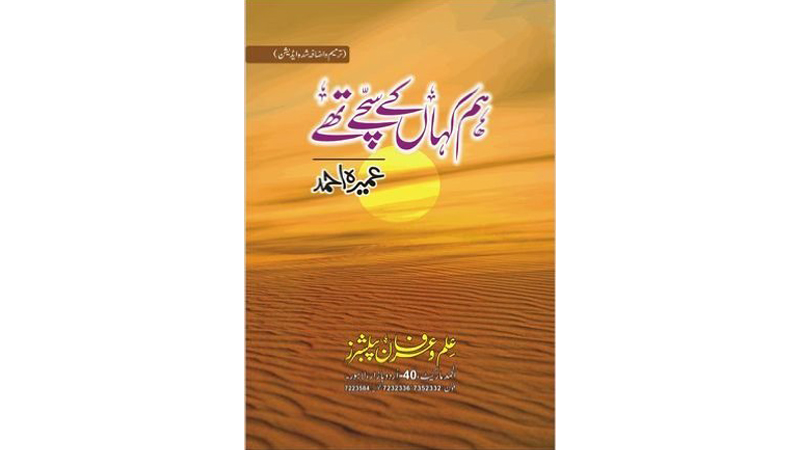 Hum Kahan Ke Sachay Thay has been written by Umera Ahmed of Zindagi Gulzar Hai, Darbar-e-Dil, Husna Aur Hussan Aara fame. The book under review was published in 2009 and deals with societal problems, relationships, poverty and misunderstandings. The characters in the book reach out and touch your soul.

The story revolves around the lives of three cousins Mashal, Aswaad and Mehreen.

Mehreen is shown as being poor but shares a special connection with Aswaad until the time they get older. They begin to bond over time. Mehreen often feels left out among her cousins. Mashal on the other hand, sure knows how to attract attention. Resultantly, Mashal commits suicide and Aswaad considers Mehreen responsible for her death. Aswaad wants to take revenge from Mehreen and restrains her from meeting with her friends, and de facto, he puts a full stop to her study even after she has achieved much in her career. Mehreen is bound in a home without the happiness of the world that how it looks like which was before and usual. Peace vanishes from her mind without the music of the world and she only becomes a maid in her house.

Their lives take an unexpected turn when Aswaad learns about Mashal’s lies, but Mehreen is already suffering despite the truth coming out. It is a little too late for Aswaad to realise where he went wrong. Mehreen has already lost too much and is subjected to depression. She leads a sorrowful life. A life full of happiness will change into a life full of tears which she receives from someone who always thinks for the best of him. So, this novel explains the disability of seeing the things as they are and not using their own judgment but believing on what other people say. This also proves that we don’t both our head and heart and we observe the things as they are shown but do not see the side effects. We usually focus on the weaknesses of the people around us, but we even do not think about that. This novel also deals with loyalty and suggests that it has to be the part of our lives as well. After all, this is the only sources to win the hearts of our loved ones that Mahal could not and everyone regrets of trusting her even attends her death.

In short, Mehreen deals with so many problems but even then gives out unconditional love. She receives several rejections as well particularly from her own family members which hurts her a lot. This is the world which is repeating its circle and it is rightly said that as we sow so shall we reap because the same happened with Aswaad who remains shocked with the death of Mehreen. This hurts him a lot but he considers it very late and for this, he repents for his entire life. He in fact, loses his real love. This story is so interesting except the sad twist which changed Mehreen life. Her love and knowledge were only limited within the boundaries which became the reason of her madness. The part of this story is a little boring but the end becomes very interesting when the reader is keen to turn the pages. Thus, the novel talks about sacrificing for the ones you truly love.

The writer is a student at DELTA school and can be reached at shaneelanaseem12@gmail.com