Wahab determined to give his best in World Cup 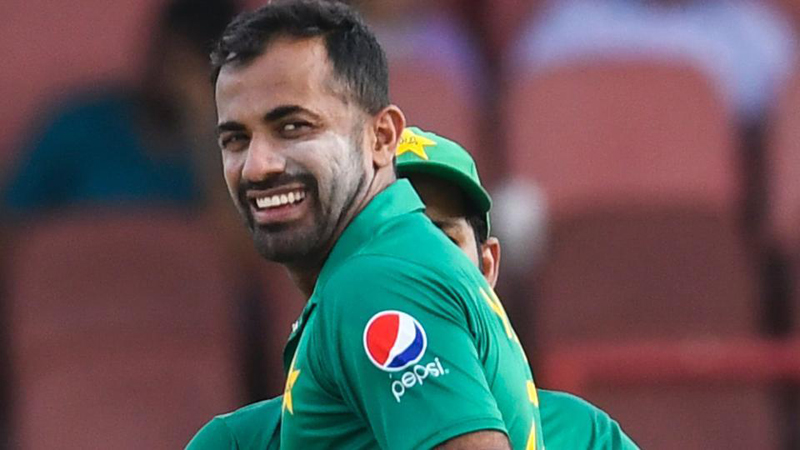 Pakistan fast-bowler Wahab Riaz has said that his dream came true when he was selected in the Pakistan squad for the 2019 World Cup. The pacer was selected in place of left-arm pacer Junaid Khan, after a four-nil series loss against England, where the Pakistan bowlers failed to make a significant impact. Riaz told reporters here Tuesday that he recently had a dream where chief selector Inzamamul Haq called him and told him this would be his last chance. According to him, this dream was realised when he was selected for the squad on Monday. “I had a dream some days back where Chief Selector Inzamamul Haq called me and informed me that this was my last chance. This dream turned out to be true,” he said. “It was my father’s dream to watch me play in the World Cup.”

Back in April 2018, Mickey Arthur, the Pakistan coach, had criticised the paceman’s ‘work ethic’ and brought up the fact that he had not ‘won us a game in two years.’ He did, however, did well in the Pakistan Cup 50-over tournament this year, picking up ten wickets in five games at an average of 20.70 and an economy of 4.60, as his team Khyber Pakhtunkhwa won the title. He said he learned a great deal in the two years that he has been away from the national team. “I am a better bowler now. I will try to benefit the team through my experience. I have never played a one-day international (ODI) in English conditions. However I am well acquainted with their pitches and conditions through Test cricket. I was selected because the team needed me,” said Riaz. “I am mentally and physically prepared because of playing regular domestic cricket. I will try to perform up to the expectations of the fans and management.”

The last two years have seen Pakistan bank on the likes of Mohammad Amir, Shaheen Shah Afridi, Hassan Ali, Faheem Ashraf and Junaid Khan for their fast-bowling needs, with Riaz overlooked. He even signed with Derbyshire in a bid to reboot his international career, but to no avail.

Riaz said he never lost hope. “Now, I feel I have been rewarded. I kept myself fully prepared for this World Cup even knowing that I am nowhere near the team. I even had dreams I was meeting Mickey Arthur and Sarfraz Ahmad, and sometimes they would pick me, and reject me at other times.”

One of his direct competitors for a slot in the 15, Junaid Khan, was dropped after being part of the preliminary squad. His made his frustration and anger plain after the event, posting a photograph on social media, later deleted, that depicted him with tape over his mouth. “Every player wishes to play for Pakistan and the World Cup is the biggest challenge in your career,” said Riaz. “Obviously, he will be saddened and very frustrated, and must be thinking he had been treated unfairly. But when I was out for two years, I was thinking the same. At the end, this is the Pakistan team and its selectors, coaches and captains make the decision. I am sure this wasn’t meant to hurt someone but it’s for the country, and whatever they think is good for Pakistan.”

Riaz’s selection is mainly based on his ability to generate reverse swing in what everyone expects will be batting-friendly conditions. Pakistan had not expected the pitches in the UK to be as flat as they were in the ODI series, as Inzamam pointed out, but on the evidence of those games, they realised the importance of an experienced hand like Riaz. The left-arm quick also said that the pitches in England would be dry and reverse swing would come into play. “You can’t judge anyone on the basis of one match. I am a bowler and there are chances that I may concede 60, 70 or 80 runs, and it has happened in the past as well. But that’s doesn’t mean that I lost my skills and ability. It is important to keep things simple on batting wickets. Variations and reverse swing are key in the death overs. With the conditions dry and wickets hard in England, there will be reverse swing and the team that does it better will have the advantage. I have expertise in reverse swing so I will try to restrict the flow of runs in the final few overs.”