In hometown, Macron battles disillusion and apathy ahead of EU election 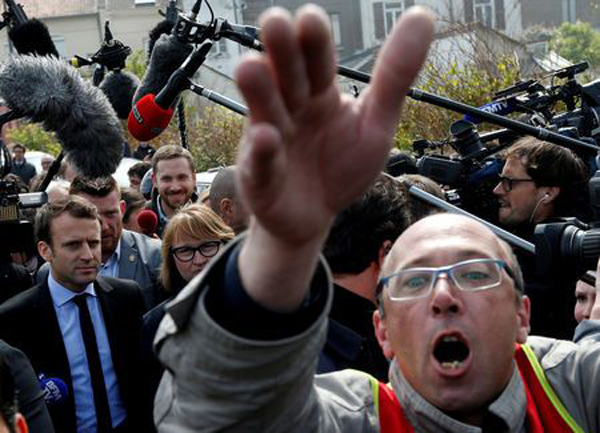 In Emmanuel Macron’s hometown of Amiens, it’s hard to find enthusiasm for either the French president or the European Union, less than a week before European parliament elections.

Blue-collar workers on its outskirts are tempted by protest votes, while a disillusioned, conservative middle-class in its pretty centre is contemplating other right-leaning candidates or not even voting at all, spelling bad news for the president in his battle against the far-right.

It was at the plant in the 2017 presidential election campaign that Macron tried to convince workers angered about the plant’s relocation to Poland that far-right leader Marine Le Pen’s protectionist, Eurosceptic views were misguided.

Two years on, only a fraction of the former workers have been taken on by the plant’s new owner, and resentment at both the European Union and Macron is building.

Abrunhosa, a unionist who was born in Portugal, says the European project was a good thing, but that competition with low-paid eastern European workers was killing what’s left of France’s industrial heritage.

“That’s what Europe has become. Even the dumbest of idiots can understand it’s better to hire in Poland than here. It’s going haywire,” said Abrunhosa, whose job application was declined by the new buyer because he was “too qualified”.

With five days to go before French voters elect their representatives for the 751-seat European parliament, the election is becoming both a referendum on Macron’s first two years in power and a vote of confidence in the EU.

A fervent Europhile, Macron is hoping to convince the French he can reform the EU into a bloc that better protects its workers, its borders and the environment, though he has had to dilute his ambition on matters such as euro zone reform.

But even in the pretty city centre of his hometown, where concerns abound over closing factories on the outskirts and public sector job cuts, the argument is falling flat.

Many middle-class voters feel Macron did not live up to his promise of re-energising the economy and cleaning up politics.

The ‘yellow vest’ crisis, which started as a revolt against high fuel prices and turned into a broader challenge to his presidency, has dented his appeal among centre-right voters who hoped he would mark a clear break from years of stagnation.

“We had hope in Macron, like a lot of people here. He was young, dynamic and he wasn’t a career politician,” said Frederic Dupont, a 41-year-old government worker who identifies as right-wing.

“With the yellow vests, his whole programme was derailed, he’s more reacting than acting now,” he said, adding that he and his wife Marie-Christine would not bother voting this time.

A few steps from the chocolatier owned by Brigitte Macron’s family, a couple of pensioners said they were still hesitating whether to vote for Macron or another candidate. “We don’t know yet – we’ll decide at the last minute,” said Bernard Lemaire.

Whether these conservative voters, in mid-size cities such as Amiens, Reims or Angers targeted by Macron to expand his centrist base, turn out to vote, abstain, or opt for another candidate, will be pivotal to the vote’s outcome, analysts say.

Few of these will vote for Le Pen’s National Rally party, which can count on a strong core of working-class voters but is struggling to make inroads with wealthier ones. But the candidate for the traditional centre-right party, Francois-Xavier Bellamy of The Republicans, is proving tougher competition than expected for Macron’s Republic On the Move.

The candidate Macron picked as his campaign flagbearer, European affairs minister Nathalie Loiseau, whose conservative background was meant to attract the centre-right, also made a series of gaffes that have weighed in the polls.