MC Chagla (1900-1981), who served as chief justice of the Bombay High Court and India’s foreign minister, worked closely with Quaid-i-Azam Mohammad Ali Jinnah as his assistant for about seven years, starting in 1922. In his autobiography, Roses in December, Chagla provides some fascinating details about Jinnah, who was at the time one of the most successful and highly priced barristers in India.

During his long association with him, Chagla recalled only once seeing Jinnah’s iron self-discipline break down; that was when he came to attend the funeral service for his young wife, Ruttie Jinnah, with whom he had been estranged for some time. “I found Jinnah betraying some shadow of human weakness: there were actually tears in his eyes,” he wrote. The only other time he is known to have cried in public was when he visited her grave in August 1947 before leaving for Pakistan.

Much has been written about Jinnah and his commanding leadership of the Pakistan movement, culminating in the creation of an independent country. However, details about the phase of his life when he led the united India’s freedom struggle, was a powerful exponent of Hindu-Muslim unity and one of the leaders of the Indian National Congress have largely been forgotten. Indians don’t acknowledge his contributions to the freedom struggle and in Pakistan little benefit is seen in highlighting that chapter of his life. 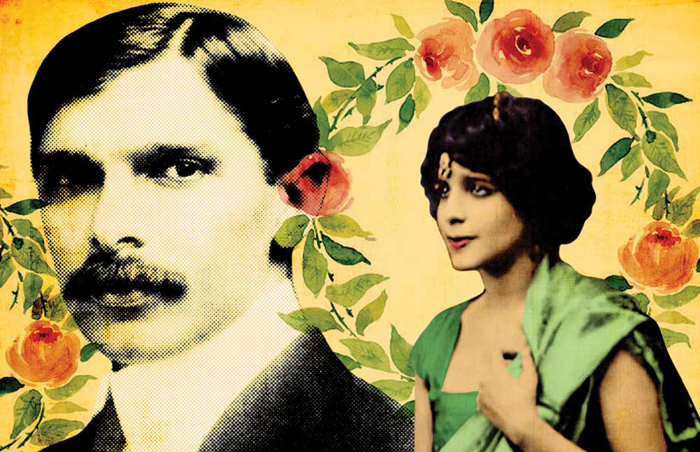 Especially shrouded in mystery is the story of Jinnah’s unhappy marriage and the fact that at one time he was deeply in love with a young woman half his age. Mr Jinnah never permitted anyone to peep into the inner sanctums of his thoughts and mind. Yet there is strong evidence that the failure of his marriage and the loss of his wife were crushing blows, which at some subliminal level powerfully impacted him, shaped his personality and moulded his character.

A recent book, Mr and Mrs Jinnah, by Ms Sheela Reddy, provides a wealth of fascinating information about his wife and marriage. The author is an established journalist, and this is her second book. She has exquisitely succeeded in treating her subjects delicately, narrating the story faithfully without compromising the authenticity of the characters or downplaying their personality flaws. The narration is powerfully emotive and portrays the dilemma of a married couple in love, harbouring opposing expectations, and locked in a relationship neither was prepared for. The book, unfortunately, lacks an index.

Jinnah started his law practice in Bombay in 1896 at the young age of twenty. He had returned from England, a transformed man, entirely westernised, brimming with confidence in himself and his capabilities. His insular demeanour and imperious style at the High Court soon caught the attention of the Bombay High Court’s bigwigs, especially the British luminaries. The acting advocate general of Bombay, Sir John MacPherson, offered the young barrister a position in his chamber, first time for an Indian. Similarly, Sir Charles Ollivant, a member in charge of the Judicial Department made him a magistrate and offered him a permanent position at a princely salary of Rs 600 per month. Jinnah declined, avowing that he hoped to make that much money in a single day. He proved right. Soon, he became a star, one of the most sought-after lawyers in India.

There were few Indian women visible on the political landscape at the time, and Ruttie’s presence by her husband’s side and unorthodox sartorial style made conservatives very uncomfortable

As his practice flourished, Jinnah became a well-recognised political figure, rising in the Congress Party and the freedom movement. Although he disliked giving social parties at his house or attending those hosted by other prominent people, he received invitations from community members and political leaders. Among them was Sir Dinshaw Petit, a wealthy, elite Parsi community leader. They became close friends, and Jinnah was a frequent guest at the Petit’s sprawling mansion by the seaside. In the process, Jinnah got to know his beautiful, stylish, young only daughter, Rattanbai Petit (Ruttie), who was 16 years old. Jinnah’s handsome tall figure, his worldly sophistication and a rising political career captured the attention and heart of the glamorous Parsi heiress.

Jinnah, nearly 40 years old, who had so far steadfastly resisted all female allure, fell for the young beauty. In his straightforward manner, in 1916, he decided to approach his friend, Sir Dinshaw, with a marriage proposal. That spelt the end of their friendship. Although a great exponent of intercommunal harmony, Sir Dinshaw was unwilling to consider the wedding of his only daughter to a non-Parsi who was almost 24 years her senior. Neither Jinnah nor Ruttie accepted the decision, but being underage, she could not get married without her father’s permission. They waited patiently. As many discovered later to their detriment, once he had made up his mind nothing could distract Jinnah from his steely determination. In February 1918, Ruttie turned 18 and eligible to marry as she chose. On April 18, driven by her dedication to Jinnah and her resolve to marry him, she sneaked out in the middle of the night from her father’s mansion, Petit Hall, and went to the Jamia Masjid to be converted to Islam. It was a life-changing move, as Parsis were a tight community and anyone abandoning the religion or marrying outside was guaranteed to bring ostracisation and excommunication from the community.

For Ruttie, conversion to Islam was the first step towards marriage. One night, she left her father’s grand mansion carrying only an umbrella, leaving behind all the luxury, security and comfort that it offered, never to return. She had never been inside Jinnah’s modest bungalow at the South Court on Malabar Hills. And, we have no way of knowing how she felt, an 18-year old girl, making that fateful journey alone into the unknown.

At South Court, a small wedding party waited, comprising mostly males; prominent among them was Sir Ali Mohammad Khan, Raja Saheb of Mahmoudabad, the great philanthropist and a close friend of Jinnah. Unlike the magnificent Parsi weddings that lasted for days, the Islamic ceremony was over in an hour. There was some unexpected excitement though. The bridegroom had forgotten to buy a wedding ring for the bride. So Raja Saheb at the last minute took out his own diamond ring and put it on the bride’s finger.

Sir Dinshaw learnt of the wedding through newspapers. He disowned his daughter whom he had loved dearly, cut off her inheritance and vowed never to have anything more to do with her.

For Ruttie, it was an unfamiliar life. She made herself share her husband’s passion: politics. There were few Indian women visible on the political landscape at the time, and Ruttie’s presence by her husband’s side and unorthodox sartorial style made conservatives very uncomfortable. However, Jinnah chivalrously defended his wife against all criticisms. Ultimately, the differences in their ages, cultural backgrounds, interests and priorities that had been obscured by romantic passions asserted themselves. Jinnah was a mature person, fervently involved in politics and dedicated to his legal practice. But, as would be expected, his young bride yearned for some quality time with her new husband. Politics intruded even during their honeymoon, when Jinnah, a member of the Imperial Council, had to return to Delhi to attend to some business. Ruttie, alienated from her large family, community and erstwhile friends, had no one to talk over her problems with. She became lonely and depressed, while her husband was too busy with his political engagements to provide any solace or companionship. Even the birth of their only child did not lessen their alienation, and she was constantly ill. Although never definitively diagnosed, she suffered from severe depression and addiction to drugs taken to ease her pain and unhappiness.

In her last letter to her husband, whom she never ceased to love, shortly before her death, she wrote, “When one has been as near to the reality of life (which after all is death) as I have been, dearest, one only remembers the beautiful and tender moments, and the rest becomes a half veiled mist of unrealities. Try and remember me, beloved, as the flower you plucked and not the flower you trod upon-”

On her 29th birthday, Ruttie Jinnah died peacefully in her sleep and was buried in the Shia cemetery in Bombay.

The writer is a Health Scientist Administrator at the National Institutes of Health, Bethesda, Maryland