* Specifically, this is 'Selectman's Office', a work by Stonington painter Jenny Brillhart in her solo exhibition now on view at Dowling Walsh Gallery in Rockland 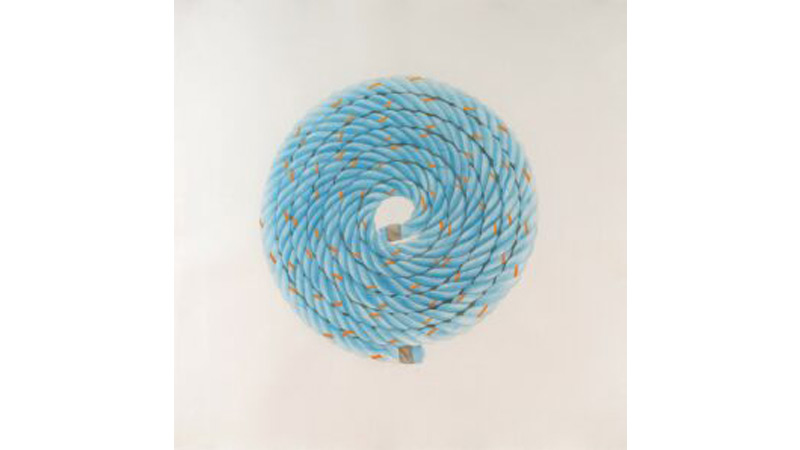 We are looking at a ceiling fan. It’s silently still. Light seems to be ebbing in softly from an open window to the right. The wispy shadows on the white ceiling set the space. Two of the fan’s blades are cropped by part of a hanging fluorescent fixture, a blocky and industrial touch that gives the bottom of the canvas a crisp insistence, stealing any homey edge from the curves of the white fan’s blades. Two gray lines on the ceiling run to the fan, holding, we assume, the wiring. The fan apparently was an afterthought. The stiff arm of the light fixture that drops straight from the ceiling is punctuated by a small circular moulding. The fan might turn on its own round module, but the light fixture’s little disk is the true centre point of the scene, the crux of the composition rendered in white, blue and Payne’s gray with naught but a flicker of orange on the fan’s base.

It’s a daydream moment. A boring meeting? Or, maybe this is just the way painters see the world: a group of forms, so seemingly simple, but our sensibilities gather and structure them into a composition. On one hand, it’s a found scene – the stuff of observational photography – and it’s certainly painted with the clarity of high-focus realism. But the most powerful effect appears slowly and silently. Generally, there’s your brain in the ostensibly rational mode we bring to meetings and official business. But this is your brain when you are slipping into sleep, barely watching the shifting shadows on the ceiling. This is your brain on art.

Specifically, this is “Selectman’s Office,” a work by Stonington painter Jenny Brillhart in her solo exhibition now on view at Dowling Walsh Gallery in Rockland. Painted in oil on aluminum, the scene, like the others in the show, is coolly meditative and painted with unusually assured technical precision.

Nearby is a painting that acts as both rehash and prologue: A bluish monochrome print of the painting is taped to the studio wall, folded and unfolded, with a white border that stands out from the neutral drywall backdrop and a rectangular chunk missing from the bottom right.

This second work, “Selectman’s Office Print with Lawn Chair,” is actually far more in line with the bulk of Brillhart’s paintings: spare studio scenes – say, a single chair or stool posed in front of the wall softly lit by daylight – painted with extraordinary skill and a patient eye. The studio painting of a print taped to the wall over a folded lawn chair on the cement floor is hardly the stuff of action movies. But it plays into the wordless narrative floating around the room. The painting of the print is a representation of a representation. The print looks much like a blueprint, and its folds make it practical – like a plan that travels from the architect’s office to the building site. Here, however, the image has traveled from the building site (the studio) to the office (the gallery). And that practical folding, which announces the print as a tool rather than a work of finished fine art, is wittily mirrored in the practical lawn chair folded in the lower corner.

Nearby is a painting that acts as both rehash and prologue: A bluish monochrome print of the painting is taped to the studio wall, folded and unfolded, with a white border that stands out from the neutral drywall backdrop and a rectangular chunk missing from the bottom right

Alongside the quiet wit is structure: While it’s easy to marvel at Brillhart’s mark making and representational abilities, what seems to drive her is a sense of composition. Brillhart is seemingly compelled to create painterly worlds of absolute formal structure. The model for this is Piet Mondrian’s unforgiving grids. With her focus on light and representational abilities, this might not seem obvious, but both use reductive palettes in a reductive project. Both exude a palpable sense of remove (as in objective distancing) and yet these aspects are the products of sensibilities as personal as they are severe. In both cases, it’s like having a conversation with a brilliant expert about their topic of authority. This might be intimidating for some people, but if you engage, you’re in for an extraordinary experience.

As abstract compositions, Brillhart’s works are visually luxurious. And this is where they relate to abstract photography. (I mean this in the sense of when photographers create images that are less about a legible subject than about their formal compositions, regardless of what thing or scene was the basis for the picture.) An excellent comparison is Cig Harvey’s work also on view in the gallery. “Scout During Skylar (Little Galaxy), Rockport, Maine” is a large print of a girl in a midnight-blue velvet jacket seen from behind as she wades through deep, new-powder snow. The entire field of vision is bright white but for a gray hint of horizon in the upper right. The flat bright whiteness of the scene almost forces us to see this as a painting stripped to its figure/ground essence. Like the Brillharts, it is cool and reductive – white, velvet blue and the girl’s brown hair. Yet through the extraordinary technique, we find the unexpected depth of the artist’s personal subjectivity.

Next to the Harvey is Scott Kelley’s “Fournier Girls,” a 55-inch-square watercolor drawing of a sky-blue coil of rope presented as a flat, diagrammatic circle on a white paper field. Again, we are seeing a reduced palette and a reductive (i.e., minimalist) image stripped of any external sense of ornament. Kelley’s new rope works are charming not for their object qualities, but for his apparently relentless attention to rendering detail for the viewer. Despite the ostensible coolness, this quality is shared by Kelley, Harvey and Brillhart.

Brillhart finds compelling compositions seemingly everywhere she looks. An easel holding an empty frame with its butcher paper wrapping dripping off it is anchored by a yellow yardstick, so perfectly balanced that it could have made Mondrian envious. The crisp window-framed edges of afternoon light just reach the legs of a pair of stacked white chairs marked by rhythmic bits of blue painter’s tape. Red floral wallpaper fades to gray as it moves up the wall at the foot of the bed with morning light playing the protagonist. A glassed frame sits on pink insulation on the cement studio floor, pretending to be a winter window. And the afternoon light reaches again to the legs of a common metal stool, sculpting a few spidery forms in its projected negative space while packing foam sits nearby, hardly to be noticed. And yet is noticed. It’s scene of virtuoso observation, and it’s as quietly beautiful as it is masterful.

Brillhart can paint. Her scenes are not only accurate, but also precise, and she can handle the brush and knife with a rare ability, which she uses to excellent effect. These scenes will strike many (at first, at least) as being as cold as the aluminum on which she paints. The sense of remove, however, dissolves as we begin to see the hyper-realistic images as paintings rather than photographically observed scenes. It’s easy to miss Brillhart’s marks because they play their representational parts so well, but with a closer look (I mean this literally – when you get close to the canvas to observe the surface), her mark making appears as nothing short of masterly – and it is handled to brilliant effect.