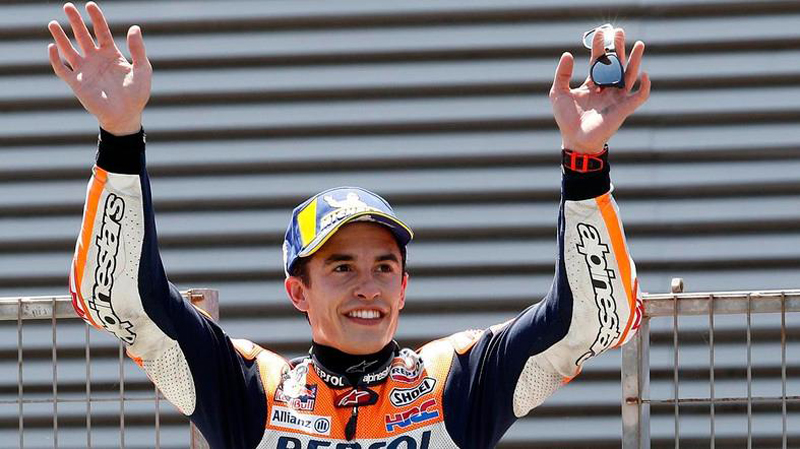 LA MANS: Honda’s world champion Marc Marquez took pole position for the French Grand Prix after overcoming crashes in rainy conditions during practice and qualifying at Le Mans on Saturday. The championship leader set a time of one minute, 40.952 seconds on wet tyres immediately before crashing in qualifying and will start alongside the Ducati duo of Danilo Petrucci and Jack Miller on the front row on Sunday. It was the third pole position of the season for Marquez, who equalled Italian Valentino Rossi’s premier class record of 55 and trails all-time leader Mick Doohan by three. “Today was one of those difficult days because of the conditions and we just tried to concentrate,” Marquez said. The Spaniard was attempting another hot lap after his first in qualifying but slid down the road at turn six and ended up in the gravel. He dusted himself off and continued but was unable to improve on his initial effort. “I’m happy with the result. There’s still a few things to improve on the bike. We need to wait on the weather and we’ll try to do a good race in front of the fans.” Marquez leads the standings with 70 points after four races and will look to extend his one-point lead over Suzuki’s Alex Rins who was back in 19th place. Ducati’s Andrea Dovizioso was in the second row with the Yamahas of Rossi and Franco Morbidelli.