* The daily high temperature is 20 degrees Celsius from May to September, perfect for a summer city getaway 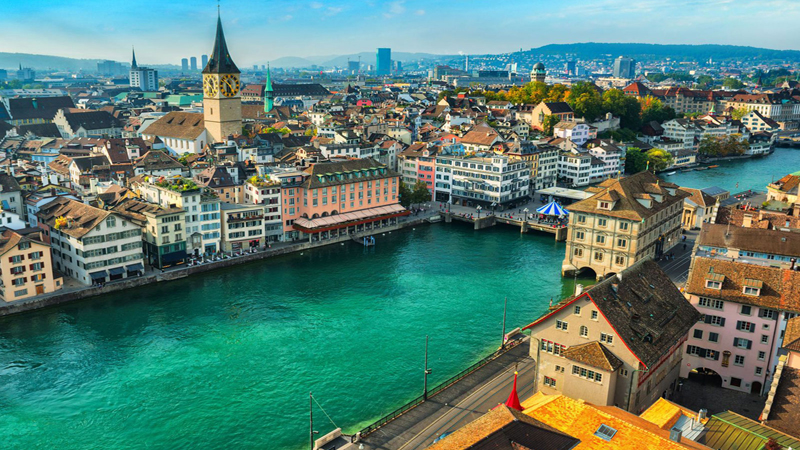 It is best known as a financial centre, but don’t let Zurich’s corporate image put you off. Beyond the brass doorplates of insurance firms, banks and stockbrokers, an intriguing city lurks with a compact centre of cobbled lanes. Expect vintage shops, quirky cafes and ancient churches. And there’s Lake Zurich, with bathing spots by secluded little parks and snowy alpine peaks rising in the distance.

The daily high temperature is 20 degrees Celsius from May to September, perfect for a summer city getaway.

Bang in the centre, Hotel Marta has 39 rooms in a striking Fifties building designed by local architect Werner Stucheli. Minimalist rooms, reached by spiral staircase, have large windows and a pared-down, oriental feel. It’s a non-profit hotel with a ‘social welfare’ employment policy. Rooms can slip above £100.

Near the excellent Swiss National Museum and the main train station, this is well-run, with simple, colourful rooms with ‘a pinch of vintage’ and a cosy feel. It has 70 rooms in a seven-storey building, an airy reception and a pleasant courtyard.

Given high hotel rates, these are a great option, especially in summer. Expect to find flats for about £80 a night, with the best good prices near the university. Book an ‘entire serviced flat’ not a ‘private room in an apartment’ or you may be sharing a bathroom. Swiss Star Zurich University is a good pick. Prices can fluctuate.

Ideal for a lazy brunch or a pit stop for a glass of wine or a fresh juice. Despite being in the financial district, Milch Bar faces a quiet courtyard with a fountain. Salads, sandwiches, sushi, curries and pasta dishes are offered. A main dish and a drink are from about £23.

There are three Helvti Diners in Zurich. The original – Helvti Stauffacher by the Sihlbrucke bridge – stands out for its sleek 1950s United States diner-style exterior. Inside are booths and bow tie-wearing staff delivering trays of burgers and buckets of fried chicken. Great fun.

This is another local chain, with a handful of cafes connected to bakeries that serve delicious fresh sandwiches and salads. It’s worth checking if one is nearby. Sandwiches are £6.50 or crazy half-metre subs – enough to feed at least five – are £32.

More on these Lake Zurich bathing houses in ‘What to see and do’, above – but they also happen to be where you will find brilliant little waterfront cafes. You pay £6 to enter, and then sandwiches/soups are about £6 on top of this. A hot dog is £3 or a beer £4.50.

Okay, you might not expect to go to Zurich to eat Argentine steaks. But that’s what this steakhouse owned by the Swiss electronic-music supremo Dieter Meier offers – along with great wine and a convivial atmosphere. This is a spot for a treat. Steaks are from £30. Or just drop by for a glass of wine and soak up the atmosphere.

The spires of the Fraumunster and Grossmunster churches face one another across the River Limmat — as though challenging one another in grandeur. Not only is the sense of history strong, but they’re also places to cool off during the warm summer days

The spires of the Fraumunster and Grossmunster churches face one another across the River Limmat – as though challenging one another in grandeur. Not only is the sense of history strong, but they’re also places to cool off during the warm summer days.

Entry to this first-rate museum – which opened in a futuristic building three years ago – is £18 or £13 with a Zurich Card. It’s a must for football fans; home to the FIFA World Cup Trophy, 19th-century leather balls and a 1966 Wembley Stadium corner flag signed by Geoff Hurst.

Some beaches are free but it’s great fun to try one of the bathing houses, which have wooden decks, pools and steps into cordoned-off areas of Lake Zurich with floating ramps. They are open from 7am to 8pm and entry is £6. Seebad Enge and Seebad Utoquai are two of the best. There are also women-only and men-only public bathing baths.

Prices vary, but the best-value pedalos are the brilliantly old-fashioned bottle-green ones on offer at Pier 7 of River Limmat. An hour’s rental is £14.50. It’s a great way to get out on the lake and see the city from the water.

Zurich is blessed with a good selection of Co-op and Lidl supermarkets in its centre – and having a picnic is a popular local pastime. Head for a bench by the lake or the river, or go to Lindenhof square, and enjoy the quiet in the shade as locals play chess and boules.

In the heart of the cobbled old town, with its jostle of vinyl record shops and retro clothes shops, try Bodega Espanola Casa Gorgot, an old-fashioned Spanish wine bar that attracts actors and writers; a glass of wine is £4. For late-night revelry, go to the Ole Ole Bar – another Spanish affair.

Zürich or Zurich is the largest city in Switzerland and the capital of the canton of Zürich. It’s located in north-central Switzerland at the northwestern tip of Lake Zürich. The municipality has approximately 409,000 inhabitants, the urban agglomeration 1.315 million and the Zürich metropolitan area 1.83 million.

Zürich is a hub for railways, roads, and air traffic. Both Zürich Airport and railway station are the largest and busiest in the country. Permanently settled for over 2,000 years, Zürich was founded by the Romans, who, in 15 BC, called it Turicum. However, early settlements have been found dating back more than 6,400 years ago.

During the Middle Ages, Zürich gained the independent and privileged status of imperial immediacy and, in 1519, became a primary centre of the Protestant Reformation in Europe under the leadership of Huldrych Zwingli.

The official language of Zürich is German, but the main spoken language is the local variant of the Alemannic Swiss German dialect, Zürich German.

Many museums and art galleries can be found in the city, including the Swiss National Museum and the Kunsthaus.

Schauspielhaus Zürich is one of the most important theatres in the German-speaking world.

Zürich is a leading global city and among the world’s largest financial centres despite having a relatively small population.

The city is home to a large number of financial institutions and banking companies. Most of Switzerland’s research and development centres are concentrated in Zürich and the low tax rates attract overseas companies to set up their headquarters there.

Monocle’s 2012 “Quality of Life Survey” ranked Zürich first on a list of the top 25 cities in the world “to make a base within”.

According to several surveys from 2006 to 2008, Zürich was named the city with the best quality of life in the world as well as the wealthiest city in Europe in terms of Gross Domestic Product per capita. The Economist Intelligence Unit’s Global Liveability Ranking sees Zürich rank among the top ten most liveable cities in the world.