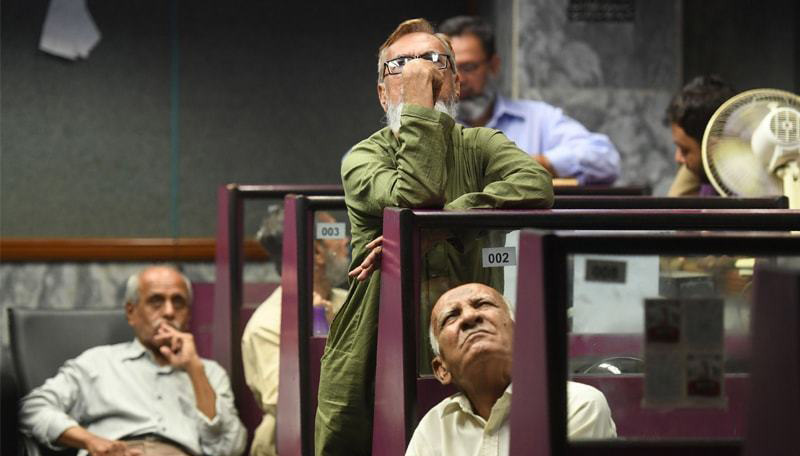 The rupee continued to fall to record lows on Friday, days after the government agreed in principle to a $6 billion loan from the International Monetary Fund (IMF).

The market opening at 33,971 remained Friday’s high, whereas the benchmark KSE-100 Index hit a day’s low at 33,006 points. As many as 63.3 million shares – worth Rs2.7 billion – of the benchmark index companies changed hands during the session.

The fall in rupee value reflects the IMF’s condition for a ‘market-based exchange rate mechanism’, which will see limited intervention by the central bank now, said Saad Hashmi, chief economist and research director at the Topline Securities in Karachi.

While the exact conditions of a final IMF deal are still unknown, Sunday’s staff-level accord, which must still be approved by the Fund’s board in Washington, said a ‘market-determined’ exchange rate will help the financial sector. This points to less support from the State Bank of Pakistan, which at present underpins the rupee in a de facto managed float system.

Late on Thursday, the SBP issued a statement saying the sharp fall in the rupee ‘reflects demand and supply conditions in the foreign exchange market’ and will help in correcting the market imbalances.

Adviser to Prime Minister on Finance Abdul Hafeez Shaikh said the other day that it is the SBP’s monetary policy committee which is responsible for determining rupee-dollar exchange rate keeping in view the foreign currency demand and supply situation of the country.

President Forex Association of Pakistan Malik Bostan says the rupee is expected to depreciate by a further 15 to 20 percent against the dollar by December this year.

The SBP is expected to further tighten the monetary policy stance on May 20 by increasing policy rate by 50-100 basis points to curb aggregate demand and ensure microeconomic stability.

An equity analyst at IIS Securities said KSE 100 Index remained negative throughout the session on Friday on further currency devaluation after Thursday’s dip and expected hike in policy rate in upcoming monetary policy announcement. E&Ps, fertilisers and commercial banks were major draggers of the index, collectively shedding 406.19 points. Overall, index closed at the lowest level of 33,166.62 after losing 804.50 points which is the lowest level since March 31, 2016.

Maaz Mulla, an equity analyst, expects bearish sentiment in the market to continue on the back of concerning economic indicators. Also, potential redemptions in mutual funds are likely to cause further selling pressure.

According to a the Topline Securities advisory, the fall in the index level is due to devaluation of rupee against dollar for last two working days, expected hike in policy rate in the next monetary policy meeting on Monday, and selling pressure from mutual funds.

However, the drop presents a political problem for the government, which came to power last year promising to build a new social welfare system and vowing not to seek what would be Pakistan’s 13th bailout since the 1980s.

With the economy facing a sharp slowdown in growth, the government is expected to raise taxes or impose heavy spending cuts to reduce its ballooning budget deficit at a time when household budgets are increasingly squeezed.

While many analysts see the rupee as overvalued and say the SBP has wasted billions defending it, a weaker currency is likely to fuel inflation, which is already over 8%, with power and fuel prices hit especially hard. The SBP, which is due to announce its latest interest rate decision on Monday, said late on Thursday that its foreign exchange reserves fell $138 million in the week ending May 10 to $8.846 billion, less than needed to cover three months of imports.