Launched in the mid of October last year, the present government’s very important initiative Clean and Green Pakistan is still starving for funds. Nothing much seen on ground during the eight months except loud claims, official statements and a couple of memoranda of understanding (MOUs) with the corporate sector. Cleverly, these organisations rewrapped their on-going initiatives and sold out to the present government as a support to the Clean and Green Pakistan.

On 21 March this year, the Ministry of Climate Change and Procter & Gamble Pakistan signed MOU “reiterating P&G commitment to play an active role in supporting the Clean Green Pakistan campaign to achieve shared goals”. The high-profiled ceremony was chaired by none other than the President of Pakistan Dr Arif Alvi.

No doubt safe drinking water and sanitation shall be the key priority areas of the people of Pakistan and these are also included in the ‘Clean and Green Pakistan’ initiative. The other important component of the initiative is tree-plantation. Students and citizens are being engaged in it. Unfortunately, no strict action has been seen even in Nayya Pakistan to protect trees and forests. Rather the unchecked mushroom growth of ill-planned housing societies has reached to its high point. No red alert.

Ensuring the health of our people requires that we invest in adequate infrastructure to increase access to safe and affordable drinking water as well as sanitation facilities. It is also very important to create awareness about conservation of water, sanitation and good health and hygiene practices at the grass-root levels.

In the country, 60 per cent of the waste remains uncollected, 93 per cent of wastewater is not treated and 42 per cent of population does not have access to basic sanitation. The most alarming fact is that Pakistan is considered to be the 6th most vulnerable country to the impact of climate change and prone to severe disasters

The UN agencies and the International nongovernmental organisations used to contribute substantially to the aforementioned social sector initiatives of the government. Because of the ill-thought policies, most of them have gone to other under developed countries. It has created a huge void of resources, both financial and technical. Only UNICEF and Wateraid are left in the field with meagre resources and huge agenda. Behaving penny wise would not serve the objectives of the government set under the Clean and Green Pakistan.

Reaching out to the corporate sector is a good idea. But having no proper CSR regime, how could the government get maximum benefits from the people who are tuned to only business. Corporate sector does not behave like the development sector while the later means only investments for no business profits and rise in the stocks and share prices. For genuinely non-profit partners, government especially the state agencies and departments need to rethink a refined and reformed framework to reengage the nongovernment and non-profit sector into the social sector development projects. Task for the cash-starved government is huge while no partners on board. Otherwise the companies like P&G would keep on getting high-level commendations for their camouflaged business campaigns.

Recently, Prime Minister Imran Khan has said to allocate one per cent of the Public Sector Development Programme (PSDP) in the next fiscal year to the Clean and Green Pakistan (CGP). The decision was taken in a high-level meeting held to earmark funds for initiatives under the clean and green programme. Indeed, a needful decision is taken.

Since the day the initiative was announced in September 2018, the Clean and Green Pakistan (CGP) is on the back burner though all the five pillars of the programme have significant importance. Who can deny the importance of tree plantation, solid waste management, liquid waste management, total sanitation and hygiene and safe drinking water?

The question is if the previous governments were not working on these issues. Certainly they were. The present government rewrapped the old initiatives to a new one. Even, the title of the initiative is the stolen one. An organisation existed much before the present government with the same name – Clean and Green Pakistan. When PTI was busy in dharna politics, the volunteers of this organisation used to pick up trash from the dharna-sites.

Ironically the initiative excluded protection of trees and forests that are diminishing at the fastest rate. No adequate check on the timber and housing mafia despite complaints. Before taking up public investments into the Clean and Green Pakistan, the concerned authorities shall pay due attention to the menace affecting the overall environment and sustainability.

The Ministry of Climate Change (MOCC) has already signed a PKR 100 million Memorandum of Understanding (MoU) with the National Rural Support Programme (NRSP) to use drones for tree plantation for the 10 Billion Tree Tsunami, headed by Malik Amin Aslam, the Prime Minister’s Advisor on Climate Change.

Engaging civil society organisation will not enhance the outreach of the initiatives but also bring the required support to the massive tree plantation. The government needs to think out of box to make the CGP initiative a success.

The writer is an Islamabad-based policy advocacy, strategic communication and outreach expert. He can be reached at devcom.pakistan@gmail.com. He tweets @EmmayeSyed 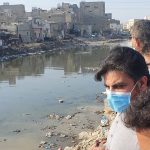