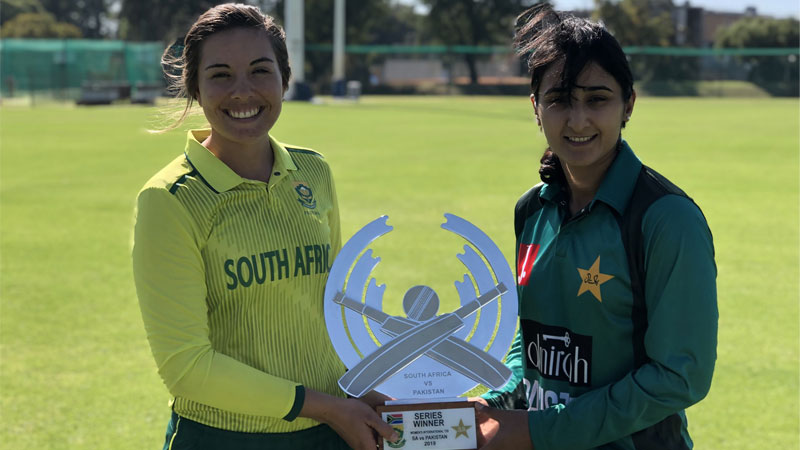 After an absorbing three-match ODI series that ended with a thrilling tied game in Benoni on Sunday, South Africa and Pakistan enter the five-match T20I series with the opening clash on Wednesday (today) at LC de Villiers Oval in Pretoria. Pakistan have made one change to the squad that played the ODI series, opener Nahida Khan has been replaced by all-rounder Iram Javed. Head coach Mark Coles feels that the T20I series will be an exciting one following the closely fought ODI series, Iram’s addition, Coles added, will bolster Pakistan’s squad as the team builds for next year’s ICC Women’s T20 World Cup in Australia.

“We are really looking forward to the T2oI series after the one-day series. There are a lot of areas that we can improve on, we are pretty confident with our game plans we just have to make sure we execute them. The arrival of Iram Javed gives us a little bit more firepower in the batting as well so we are really looking forward to it. It’s been a great ODI series and now we are very excited about what’s to come in the next 10 to 12 days in terms of our T20I cricket and our build up to the T20I World Cup next February-March in Australia.” Pakistan are currently ranked seventh in the ICC women’s T20I rankings while South Africa are placed sixth. The two teams have so far contested in nine T20Is, Pakistan have won four while South Africa have been victorious on five occasions. The two teams last played a three-match T20I series in the UAE in March 2015, South Africa won the series 2-1 with Pakistan taking the series opener at Sharjah by a five wicket margin.

In the ICC batting rankings, Pakistan captain Bismah Maroof and star batter Javeria Khan share the 16th spot, both have 571 points each. South Africa’s highest ranked batter from their T2oI series squad is Mignon du Preez, she is placed 23rd with 524 points, 11th placed is regular South Africa captain Dane van Niekerk who is not part of the current squad due to an injury.