* This mighty fort is located near Jhelum close to the city of Dina in Punjab and while travelling on the Grand Trunk Road, one can easily see the signboards for Rohtas Fort 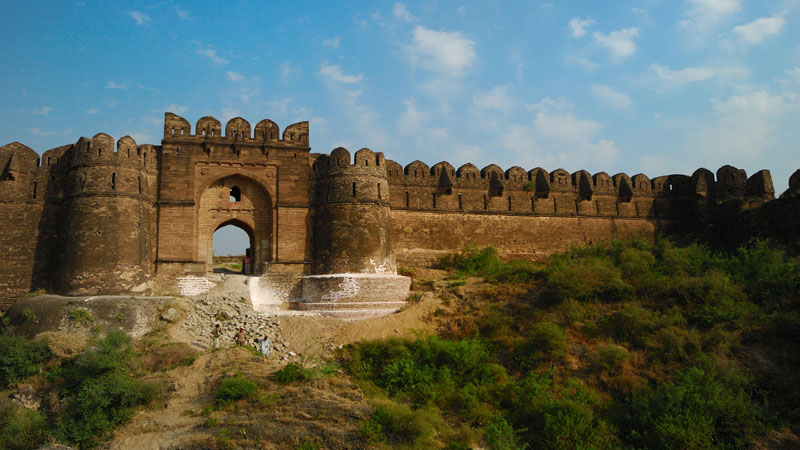 Let me take you to a 16th Century fort which is said to be made by some aliens or giants and not by humans, because its grandeur and massiveness is mind-blowing and one is stunned for hours at its intricacy and labyrinth like structure.

From historic chronicles of the Mughals we get to read that once the Mughal Emperor Jahangir also said about the Rohtas Fort “the strength of it cannot be anticipated”. Rohtas Fort was inscribed by UNESCO as a World Heritage Site in 1997 for being an “exceptional example of the Muslim military architecture of Central and South Asia”.

This mighty fort is located near Jhelum close to the city of Dina in Punjab and while travelling on the Grand Trunk Road, one can easily see a signboard of Rohtas Fort. The fort was constructed during the reign of Sher Shah Suri in seven years from 1541 to 1548. It spreads out over five kilometres and has a thick fortification wall enclosing it. It is said that the village outside the fort, which we still see today, was an old settlement there since the time this fort was constructed.

The fort had entrance from 12 gates and had 68 bastion towers. I wonder how the security was managed with so many gates. Almost all gates of Rohtas are designed in a defensive manner and one has to cross maze like gates while making way into the grand and imposing fort. The gates of the fort are Sohail gate, Shah Chandwali Gate, Kabuli Gate, Sheeshi Gate, Langar Khani Gate, Talaqi Gate, Mori or Kashmiri Gate, Khawas Khani Gate, Gatali Gate, Tulla Mori Gate, Pipli and Sar Gate.

Another interesting thing one notices about the fort is that it is strategically located on Sher Shah Suri’s GT Road connecting Afghanistan, entire north India and Bengal. The large fort could hold a force of up to 30,000 men. I must say that it surely is the king of all forts in Pakistan.

This fort is divided into two areas by a great stone wall. The smaller area was separated for royals and the bigger one was for the military troupes. Shah Chandwali gate is the only access between two parts of the fort.

The Sheeshi gate is another marvel inside the fort as this gate does not open outside the fort but into a strategic trap laid for the attacking enemy and every time I see it I am impressed by the intelligence of the builders. Sheeshi gate is named so because of the blue glazed used on its exterior.

Interestingly, from Sheeshi gate a narrow corridor leads towards Langar Khani gate which is a ensnare door. If by chance, or knowingly, the enemy entered the gate, they would find themselves in the trouble and maybe it was his death. Langar Khani gate was named so because there were rooms used as Langar Khana (distribution of free food).

It is also said that the fort was constructed by Sher Shah’s will to keep Emperor Humayun away from the region and to keep a close watch on the people living around the same area and known as loyal to the Mughals.

The fort is basically a never-ending site. It is very difficult to roam around the entire fort in one day. You can plan several trips to explore different parts of the fort but the most fascinating structures are the inner spaces of the fort. The boundary wall of the fort is irregularly shaped having a huge structure while the walls’ height is from 10 to 18 meters high and several meters thick. The thickness of the walls and the huge stones and material used in the construction of the fort compel one to think that it is not man-made. I wonder how the builders managed to construct such a masterpiece in those times. The fort is no doubt a stunning success of stone masonry.

Although I have travelled many countries but I never came across a similar construction. I must say that Pakistan is lucky to have such wonders and we all should cherish these. The walls and bastions are accessible through terraces and stairs at different levels and while visiting the site you will notice the quarters for soldiers along the walls having gun slots as well. Trust me you will get the best view of the hills from this fort’s bastions.

Though there are various compounds and rooms to peek into, the main structures in the area are the Shahi Masjid, Rani Mahal and the Haveli of Maan Singh.

The Shahi Masjid near Kabuli gate, with no domes and minarets, has the same pattern of construction like rest of the fort. Quranic verses are stone carved all over its facade and interior.

You will also see fascinating Baoli (step well) in the fort, the most mesmerizing part. A local guide in the fort says that out of three Baolis at Rohtas Fort, Shahi Baoli was used by the royals.

The Haveli of Raja Maan Singh was constructed during Akbar’s rule. It is said that Maan Singh built a mansion at the highest point of the fort. A long staircase leads to the crown of the building, a domed chamber punctured with windows in all four walls. The Rani Mahal has collapsed with the passage of time and negligence and now only a portion of its original structure survives.

The fort remained in use during the Mughal era, and was used almost continuously until 1707, though it was not popular with the Mughal rulers since it lacked large gardens and the sort of grand architecture found at Mughal-era forts, such as at the Lahore Fort.

Nadir Shah of Persia and Afghan ruler Ahmed Shah Abdali both camped at the fort in their expeditions in the Punjab during the declining days of the Mughal Empire.

It is a must visit site in Pakistan and I think it should be developed a little more for the tourists.