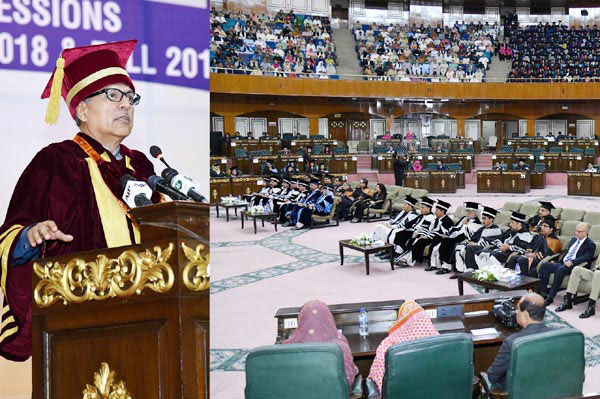 The COMSATS University held its Convocation 2019 on Wednesday at the Convention Centre, Islamabad. As many as 1,407 students graduating in Spring 2018 and Fall 2018 semesters were awarded BS degrees in two different ceremonies.

The chief guest for the first session was President Dr ArifAlvi, who is also the COMSATS University chancellor. He awarded degrees and medals to the students.

Speaking on the occasion, Arif said Pakistan had successfully eliminated terrorism, while the neighboring country was encouraging extremism. “During the recent standoff between Pakistan and India, the Pakistani government and media showed maturity and talked about peace; whereas the Indian government and media wanted war.” He said Pakistan provided shelter to 3.5 million Afghan refugees, which was an example of humanity. He said the third and fourth generations of Afghan refugees had been residing in Pakistan. In the first ceremony, degrees were awarded to 718 BS students from disciplines of Bachelor of Science in psychology, bioinformatics, physics, economics, biosciences, business administration, computer engineering, electrical (telecommunication engineering), electronics, mathematics and architecture from the Islamabad Campus.

The chief guest for the second ceremony was COMSATS Executive Director and Pro-Chancellor Dr SM Junaid Zaidi. He awarded degrees to the students and addressed the gathering, in which he appreciated the performance of the students and dedicated faculty. COMSATS University Rector Prof Dr Raheel Qamar and deans and directors of different campuses were also present on the occasion.