* Hotels within the city walls are super pricey 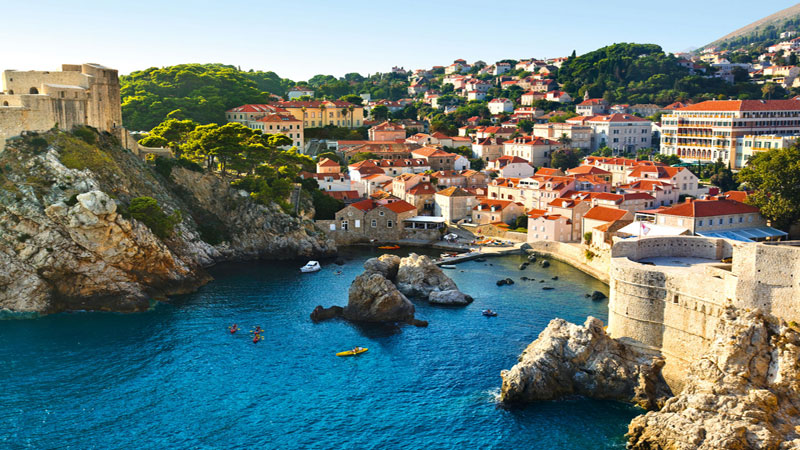 Less than 30 years ago, Dubrovnik was under siege during Yugoslavia’s break-up. Now, it is a booming tourist destination attracting 1.2 million annual visitors. With its ancient churches and monasteries, this medieval walled city by the Adriatic Sea is incredibly photogenic – no wonder it was chosen as a key setting for TV show ‘Game Of Thrones’.

But can you visit this mega-popular Unesco World Heritage Site on the cheap?

Hotels within the city walls are super pricey, but Ivka is a 30-minute walk from Pile Gate, one of the main entrances. It’s a pleasant stroll to this no-nonsense, friendly hotel on a quiet side street in the Lapad district, and it has comfortable rooms (ask for one with a balcony). Plus there’s a relaxing little bar terrace. B&B doubles from £64 (ivkahoteldubrovnik.com).

Also in Lapad – a bus ride or a 40-minute walk to the city – a hotel is nestled which is for those who want to enjoy the Old Town and the sea. It’s up a hill from Sunset Beach in a pretty cove. Do not expect a fancy design hotel: rooms are basic, but spotless.

The last of our Lapad trio has wildly fluctuating prices. Over the summer, rooms here can cost around £200 a night. But grab a deal before the crowds arrive – or in early autumn when it’s still warm – and rates can be as little as £73. There’s a terrace with sun loungers and steps to the crystal-clear Adriatic, plus an infinity pool. Rooms are slick and modern. B&B doubles from £73.

Also in Lapad — a bus ride or a 40-minute walk to the city —a hotel is nestled which is for those who want to enjoy the Old Town and the sea. It’s up a hill from Sunset Beach in a pretty cove. Do not expect a fancy design hotel: rooms are basic, but spotless

If ever a city were made for Airbnb, it’s Dubrovnik. Old Town summer prices are usually about £120 to £150. But rates drop at places such as Room Ella, a quiet flat a 15-minute walk away. Rooms from £68 at Room Ella (airbnb.co.uk); prices can fluctuate

Close to the Dominican Monastery, Rozario is a good-value, down-to-earth restaurant run by Marina and Marin Vuletic. Enjoy various seafood and meat dishes either on the small terrace or in the cosy dining room. The oysters and grilled squid are especially good; three courses from £25. Address: 1 Prijeko, konoba-rozario.hr.

This restaurant, popular with locals, is outside the city walls by Pile Gate with terrific sea views. It’s the sister restaurant of Nautika, which is just across a square (one of the city’s best). But you can dine on swordfish carpaccio, seafood risotto and octopus salad here for much less – around £25 for three courses. The citrusy ‘rozata’ pudding is a treat. nautikarestaurants.com

Situated on the passageway toward the cable car station which takes you to the ridgetop overlooking the city, Barba is a tiny fast-food joint famous for its tasty octopus burgers (£8.50). Tuna burgers (£8.80) and sardine burgers (£7.30) are also on offer. It’s a perfect pitstop. Address: 5 Ulica Boskoviceva.

For a sandwich on the go, look no further than Buffet Skola. In an alley close to the Franciscan monastery, this gem serves homemade focaccia-style bread with Dalmatian cured ham, local cheese and tomatoes. It costs about £3.50 for a sandwich. Address: 1 Ulica Antuninska.

Pizzas are very popular here. Pizzeria Baracuda, in an alley off the Old Town’s main road (Stradun), is a good choice, as is Pizzeria Tabasco by the cable car station; pizzas cost around £10.50 at each. For a bargain, head to the atmospheric Kavana Teatar in Lapad, where elderly gents play cards and a good margherita is £3.70. Address: 72 Iva Vojnovica

Okay, are you feeling fit? It’s an hour’s walk to the top of the cable car station (405 m high) on a lovely zig-zag route with wildflowers and pine trees – plus fantastic views. You’ll be saving £20, getting some exercise and avoiding the cruise ship crowds that can overwhelm the Old Town. At the top there’s a thought-provoking museum dedicated to the 1991 to 1995 Homeland War; entrance £3.50.

Game Of Thrones tours lasting 90 minutes cost about £15 – and many are on offer. Instead, check out kingslandingdubrovnik.com, which explains the locations for the series so you can see them at your own pace. The website also shows which spots have featured in each series. 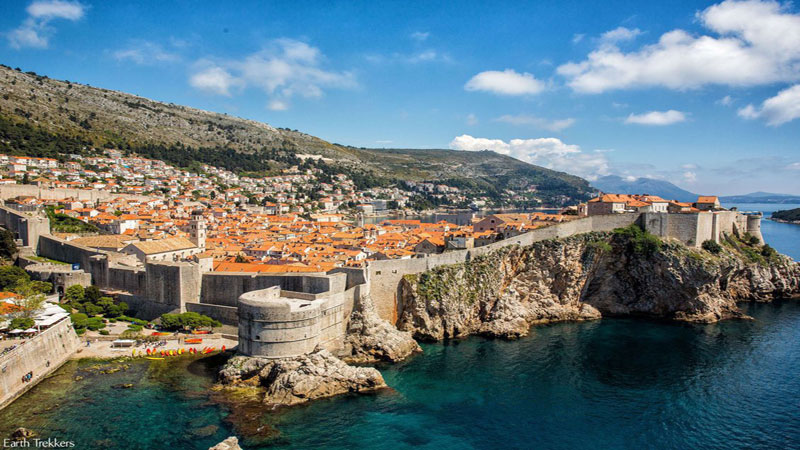 The cost of walking along the ramparts of the city walls is £23 (up from £17.50 last year). This is a brilliant experience, but buying a Dubrovnik Card for the same price also gives you access to monasteries, several museums and bus rides. Buy one ahead of time online and you save an extra 10 percent.

St Lawrence Fortress overlooks Pile Gate, and your city walls ticket or Dubrovnik Card gains you entrance (which many don’t realise). The views of the old city are particularly good here. Before you enter, there’s a little park with benches that’s ideal for picnics.

The cool spot for drinks is Buza, which overlooks the sea at the base of the city walls, but a glass of wine costs around £5.50. Libertina is a tiny pub near the Dominican Monastery with black-and-white pictures and locals propping up the bar. It’s an experience of real local life – but make sure you check the time before you go, as it is open only from 10am to 2pm. A glass of wine costs £1.20. Address: 3 Zlatarska.

Dubrovnik is a Croatian city on the Adriatic Sea. It’s one of the most prominent tourist destinations in the Mediterranean Sea, a seaport and the centre of Dubrovnik-Neretva County. Its total population is 42,615. In 1979, the city of Dubrovnik joined the UNESCO list of World Heritage sites. The prosperity of the city was historically based on maritime trade; as the capital of the maritime Republic of Ragusa, it achieved a high level of development, particularly during the 15th and 16th centuries, as it became notable for its wealth and skilled diplomacy.

In 1991, after the break-up of Yugoslavia, Dubrovnik was besieged by Serbian and Montenegrin soldiers of the Yugoslav People’s Army (JNA) for seven months and suffered significant damage from shelling. After repair and restoration works in the 1990s and early 2000s, Dubrovnik re-emerged as one of the top tourist destinations in the Mediterranean.