The melting glaciers of Pakistan 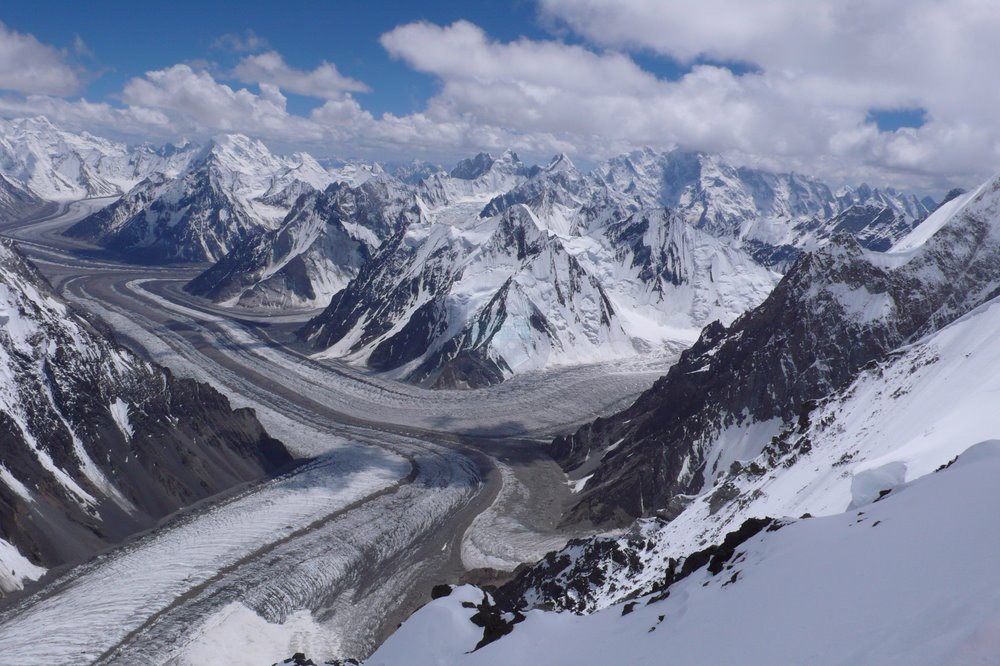 According to various studies, with 7250 discovered glaciers, no country on earth outside the polar region has more glacial ice than Pakistan. These glaciers are of immense importance for the country as the rivers that feed on glaciers make up about 75% of the stored water supply of the country. These facts speak for itself about the dependency of the country on its glaciers.

Over the last seven years, several places, including Gilgit Baltistan and Chitral Valley, have experienced numerous major floods that many studies have given credits to the climate change. Countless lives have been laid to waste because of the floodwaters and has also taken away a living place from thousands of people. The undercutting of the once-flamboyant tourist industry is also a major negative impact caused by the overflow of water caused by the melting of glaciers.

As the climate change is factorized for the Chitral Valley’s catastrophes, the valley has also become a prime example of the way an education depraved population can make the condition inimical, hence making the suffering of the people even worse. The glaciers of this place offer an evident source.

The population of the valley has increased to quite an amount — from 106,000 in 1950 to 600,000 today — while most people living there are provided with only 2 to 4 hours of electricity per day. Without any sort of preservation or refrigeration, the people are left with no choice but to turn to vendors which gather and hoard most of the valley’s shortening accumulation of ice, selling at high prices and making a grand living.

Due to the problems being caused by the melting of glacial ice, Germany, in 2016, had announced to provide a grant of 6 million Euros, through the KFW Development Bank, to monitor over 5000 melting glaciers in the northern parts of Pakistan. The German grant has helped Pakistan to study and address the challenges caused by climate change.

Formation of artificial lakes is also an aftermath of the melting of glaciers and it has proved to be a worrying sign. Many places such has Gilgit have suffered by the making of such rivers. A little ice sheet softening has swollen Barsuwat Nullah in the Ishkoman valley of Ghizer region, Gilgit-Baltistan, making a fake lake and obstructing the stream of the Immit River. The water has submerged more than 30 houses, developed land, connection street, and dairy cattle cultivates and washed away over twelve vehicles and many cows head in the upstream territories.

An increase in the recurrence and force in precipitation rather than snowfall in different mountainous regions give way to streak floods, which, as a result, do expansive harm in the territories. Scientists state that other than rising temperatures around the globe, fast-paced colonization of the valleys in the mountains and as a result, increased traffic, have quickened the liquefying procedure of the ice sheets.

In any case, Pakistani researchers have just said that ice sheets in the Karakoram mountains of Pakistan traveling to the Upper Indus Basin regions were steady, some of which were notwithstanding developing. Be that as it may, investigation based solid confirmations demonstrate that a decent number of icy masses are presently softening quick because of rising temperatures.

This is disturbing that softening procedure proceeds in winter likewise because of which we discover outstanding flow in streams or waterways. This is causing flooding in these valleys, presenting dangers to lives and occupations of the general population other than harming the framework in these zones.

Late discoveries of 10 climate checking stations introduced by the Pakistan Meteorological Department additionally reasoned that icy masses in removal zone, which alludes to the low height zone of a glacier, is subsiding quicker and snow line is moving upward. This implies contracting in the ice sheet region. This implies the removal zones are expanding and the gathering zones of icy masses are diminishing.

It is claiming at the lower rise to twenty-five hundred meters the warmth infiltration is expanding, which is the reason behind the icy masses contraction at such rise levels. For example, one climate observing station introduced at the Hinarchi ice sheet in Bagrot valley of Gilgit region has demonstrated that the icy mass has withdrawn eight hundred meters in the thirty-two years somewhere in the range of 1977-2009. It withdrew another three hundred meters somewhere in the range of 2009-2014. In like manner, the Baulter icy mass which had withdrawn fifteen hundred meters, shrank another four hundred meters by 2014. The eventual fate of the Barpu icy mass looks disheartening as it has contracted six hundred and forty meters since the year of 1977.

These climate observation stations belonging to the Pakistan Meteorological Department likewise observed and predicted that more than one degree Celsius increase in temperature will cause the arrangement of icy lakes and the wonder of GLOF – chilly lakes upheaval floods – incidentally high waterway flows and landslides.

As per the Pakistan Meteorological Department (PMD), there used to be somewhere in the range of 2,400 conceivably risky chilly lakes in the most remote mountain valleys of the nation in 2010, a figure that has now expanded to more than 3,000. Then again, a few glaciologists state that all Karakorum ice sheets were now softening. They gauge that 58% ice sheets in the territory were increasing mass and 42% were destroying. Yet, such perceptions of the glaciologists depend on satellite perceptions and not handle ponders.

The flooding icy dissolve amid summer months, especially amid rainstorm season (June-September) would regularly prompt waterway flooding downstream. On the impact points of reports of fast ice sheet liquefying in the nation’s north, alerts have been as of now issued by water specialists that the nation will most likely go up against an intense water lack, in light of the fact that there would never again be any water holds as icy masses.

This postures obvious hazard to the manageability of farming division, which is a pillar of the nation’s economy. These negative effects of a dangerous atmospheric deviation on the nation’s icy masses can be relieved with adjustment measures, for example, water preservation at residential, modern as a rule and farming in especially. Since agribusiness devours almost 96 percent of the complete water accessible in any structure.

Liquefying of frigid ice is an intense issue as can be seen by all the negative effects it has had on the nation. Henceforth, the issue ought to be paid attention to additional by the administration and further advances ought to be taken to draw out arrangements. Building dividers on the ocean bottom could keep icy masses from dissolving and ocean levels ascending because of an unnatural weather change, researchers state. Obstructions of sand and shake situated at the base of ice sheets would stop ice sheets sliding and falling and keep warm water from disintegrating the ice from underneath.