‘Sense of Sight’ shows why photographers are going retro 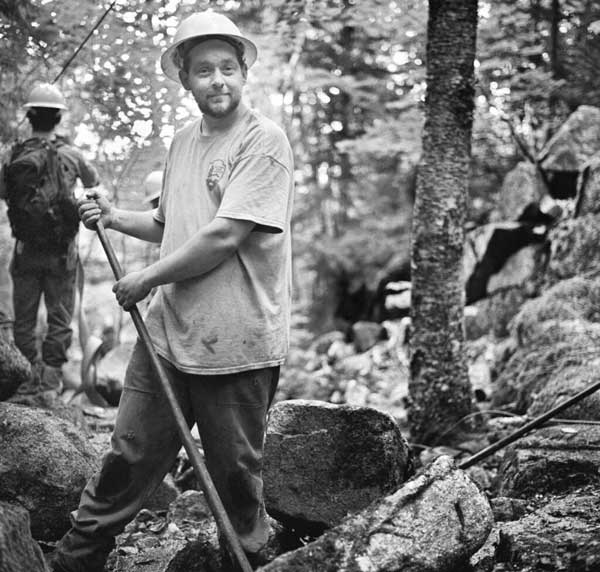 Founded by longtime Maine photographer and educator Joe Della Valle, Safelight is a darkroom studio dedicated to analog film where anyone – from pros to amateurs – can process film and make silver gelatin prints from negatives as large as 8-by-10 inches. The work of those who use the studio is on display in an exhibit at the Portland Chamber of Commerce called Sense of Sight.

To be clear, I consider silver gelatin printing an art in itself. Making an old school silver gelatin print, after all, is the stuff of dodging, burning and spotting. Anyone who does digital work with Photoshop has an idea of what these things mean, but, fundamentally, they are manual aspects of making silver gelatin prints, a world in which there is no “undo” button. And spotting? That’s quite simply painting out the flaws of a print with ink, typically things like scratches on negatives, but photographic artists can go as light or deep as they want.

Digital tools within programmes like Photoshop are generally based on the common controls of analog photography. It has become very easy to experiment digitally, particularly because you can try out different qualities, tools and exposures without committing to anything. Even quite recently, many photography fans had good reason to think that analog photography was fading to the point of extinction. But digital photography has not been the enemy of the old-school approach that so many of us assumed it would be. The more people who took up photography as a hobby because digital made it so easy, the more people learned about photography – including traditional approaches like wet plate and silver gelatin printing. Whereas Della Valle might have once thought he was shepherding a dying breed, his friends and flock have recently been exploding in numbers, interest and opportunity.

Sense of Sight shows Della Valle’s Safelight group in an impressive light. It is visually dense with an eye to landscape photography, but it is strong in portraiture and figurative work.

Digital tools within programmes like Photoshop are generally based on the common controls of analogue photography. It has become very easy to experiment digitally, particularly because you can try out different qualities, tools and exposures without committing to anything

Della Valle’s own work blends landscape with the figure. But, given his technical approach, Della Valle’s figures are often mere wisps within solid scenes. Covering the lens momentarily while his model moves, Della Valle lets the scene dominate. But he takes the multiple exposure down many paths. The multiple figures in a scene within the Popham ramparts or on the stairs of an old house are ghostly. That same figure in different poses in front of the Old Orchard Beach pier hits at the memory of a day on the beach – his partner might have been in dynamic motion, but the pier itself spent the day solid, settled and still. One image is like a Monet painting with the artist’s partner playing the role of the five garden-reposed figures. Another scene has the model at the water’s edge in front of a cliff, but the multiple exposures vary greatly, leaning heavily on an over-exposed and solarised version of the same sundressed-model on the left, her reflection echoing towards us in the shallow water.

To be sure, Della Valle’s images are challenging and brilliant. But the sense of print sweeps in with his work and we realize that we’re experiencing a wave of impressive silver gelatin prints. This is the crux of Della Valle’s Safelight group: old school printing. Each print is a work of art because it is made individually and then touched upwith a brush and ink.

Della Valle’s own work is so conceptually rich that it’s hard not to overlook his myriad technical abilities. But in the landscape work of the other studio artists, these qualities come more easily into focus. In one arctic landscape image, Susan Carter’s clouds pour in over the mountain range with the physical presence of a spaceship; in the next, they rise far and beyond as a gossamer netting so many miles beyond the thick, dark band of spiky peaks. 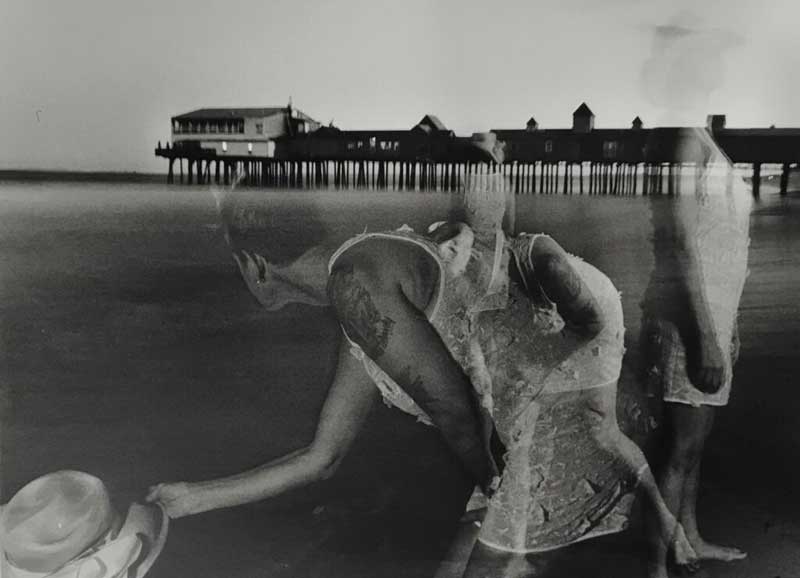 With their hand-coloring, Jacquelyn Blackstone’s images emphasise the physical presence of the photographic prints. Blackstone has a sense for the nostalgic – lost colours on 1950s signs in the American landscape. She leans to the playful, but when, for example, she colorises a fiberglass waitress sculpture, Blackstone reveals her feel for cringe and creep.

Daniel Grenier appears with particular depth and range, and his work includes two of the very best images of the 100 or so in the show. One is a shallow depth-of-field view through a lean-to path in the woods, the eerie image matched to every grain by the picture’s print quality. Another is deceptively great, calm and simple instead of poignant. A forest worker with a bland but ever-friendly smile absently puts a steel rod to a stone. Another rod reaches in, making an “L” on the surface that shifts to a “V” as you move your eye from the flat, front ground to the steps that step back one-by-one to the count of nine. Incorporating figures, gesture, trees, stones and tools, this is a deceptively rare photograph that pings back and forth, shifting deeper and deeper with every volley.

And there is much more. Alison Shahan’s broken clockwork grasped in a considering hand is an observational treat. Katie Fagan’s’ “Brooklyn, Hitchcock” digs deep on the city side of street photography: Just a glimpse down an alley can be terrifying, even omen-like. In another narrow-focus shot, she shows a huge billboard inwhich only a single letter – “A” – comes into focus within the vast metropolis.

Safelight’s Sense of Sight is a huge and quite excellent show that, we should all hope, is a harbinger of things to come. It is the first show at Portland’s Chamber of Commerce, which is not only open to the public every day, but which allows the artists to sell their work and keep every penny of the sales. Artists have been working to find new and more paths for remunerative sales. While I am a big fan of the traditional commercial gallery, this is an impressive morsel of cultural symbiosis: It’s on-target PR for the chamber and excellent marketing for the artists, entrepreneurs all.

I have long thought Portland should have more commercial galleries. But in the meantime, so many crafty and creative venues are bubbling to the surface that it makes me wonder. Sense of Sight, after all, is an excellent show at yet another untraditional Portland venue.