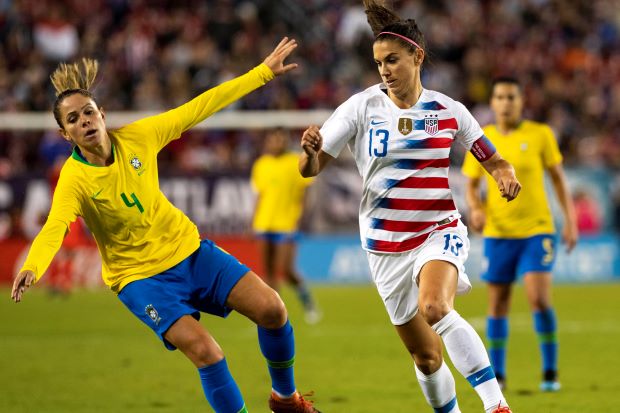 Brazil’s female footballers have made great strides in growing their domestic game but they lack the organisation to emulate the United States team and demand the same pay and conditions as men, defender Erika said on Tuesday. The Brazilian Football Confederation (CBF) this year obliged all first division clubs to create a women’s side and are funding them directly, officials said. But their income is still vastly inferior to their male counterparts and Erika said she is envious of the World Cup-winning U.S. squad, 28 of whom sued the U.S. Soccer Federation last month in a lawsuit that includes complaints about wages and working conditions. “I think it is sensational what the U.S. players did,” she said in a phone interview from Spain, the day after Brazil lost 1-0 to Scotland in a friendly, their ninth consecutive defeat.

“We have the strength to do the same in Brazil but we don’t have courage or the (people) to guide us. “The U.S. women are a gigantic force. They have won a lot and that makes it easier for them to fight for what they want. We need to be united but we haven’t managed that.” Erika blamed that lack of unity on geography. Most of the Brazilian women play their club football outside the country and get together only for international games, which makes organising more difficult. “I think distance is a problem,” the 31-year-old Corinthians defender said. “The principal players are based outside the country and that makes it more complicated, if they were all able to be here it would make it easier to develop, and we’d be stronger. “Sadly, we still think individually.”

The Brazilian players nevertheless looked at recent big crowds for women’s matches in Spain and Italy – a world record 60,739 people turned out to see Atletico Madrid take on Barcelona last month – as indicative of the growing power of the female game. Women’s football has gained a higher profile this year in Brazil, with the CBF paying to help women’s teams compete in the 16-team first division and also setting up a second division and under-18 league. “Without a doubt here has been a huge growth and there is a long way to go,” Erika said. “I want to see the kind of crowds we saw in Madrid in Brazil. It inspires us.” Brazil are one of 24 teams who will take part in the Women’s World Cup in France from June 7-July 7.