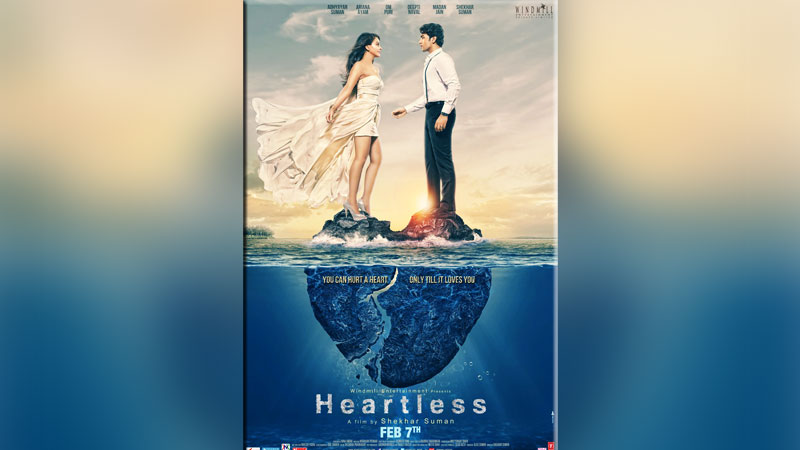 ‘Heartless’ is an Indian film which was released on February 7, 2014 and has a running time of 127 minutes.

This film is produced by Sajid Rizvi and Alka Suman, with the direction and story both done by Shekhar Suman. The dialogues are written by Niranjan. The lead roles are played by Adhyayan Suman and Ariara Ayam. The film focuses on the medical term called Anaesthesia Awareness which is a condition where the patient cannot move his/her body nor can communicate but he/she can hear or understand whatever happens around them.

The story is based on the life of a young businessman Aditya Singh who has a weak heart and requires a transplant. His life changes when a beautiful girl Riya (Ariana) enters I n his life. Aditya falls in love with her and she gives him the courage as well as convinces him for the heart transplantation. Aditya’s mother does not agree with their relationships which are why Aditya leaves the house and marries Riya. On the day of his operation of heart transplant, his mother comes to hospital. Aditya give the responsibility of his operation to his friend Dr Sameer Saxena. At the time of his operation, Aditya does not get enough anaesthesia therefore, he becomes aware of everything happens during his surgical procedures as well as he feels pain but he cannot move. Dr. Sameer along with Riya plan to make it an unsuccessful operation so that Aditya dies and his wealth should be possessed by his wife Riya. They mix poison to the donor heart so that heart must be rejected. When the mother of Aditya comes to know about the entire situation, she sacrifices her life by committing suicide and transfer her heart into Aditya’s body mum dies and the entire team of Riya get arrested by the police. And the story ends from here.

The content of the film is brilliant as it shows the love of a mother that is beautiful. However, the film proved to be a disaster at the box office and also received a lot of criticism from the audience. The film is slow and a bit boring at the start but the hospital scenes are enough to make you cry

The content of the film is brilliant as it shows the love of a mother that is beautiful. However, the film proved to be a disaster at the box office and also received a lot of criticism from the audience. The film is slow and a bit boring at the star but the hospital scenes are enough to make you cry. This movie was accused to be a copy of a Hollywood movie “Awake” and the critics gave their views that medical terms were used in a weak manner so the directors should have consulted with medical experts before making the movie which would have been much better. One of the positive things which this movie highlighted is that most of the young boys become blind in love of girls that they even leave their parents but how can those girls be with the boys who were not real to their parents? So a nice lesson can be judged from this movie which reveals the fact of life and the importance of mother in one’s life. This is how the Aditya’s mother love proved the real relationship between a mom and son. According to me the weakest point of this film were the weak performances of the leading roles as both of them were zero in acting that they failed to convince their audiences with their acting skills. The positive aspect of this movie was the love of a mother which was characterized beautifully and another positive point was that line said by Riya in the movie that, “Life must not be measured in years rather it should be measured in moments, and those moments must not be spent in waiting of someone’s death but rather they should be spent for waiting of a true life. So learn to live in the moments but not in years.”

The film’s focus on the importance and value of a mother is what moves you, but other than that, there is nothing special in it.

Several critics have noticed striking similarities between the film and the 2007 Hollywood medical thriller ‘Awake’, leading some to describe ‘Heartless’ a copy of the said film.