Barefoot Heart is a beautiful tale of personal recollections

At the beginning of her story, Elva explains that she never had a bed as a child, instead, she slept on a series of makeshift cots 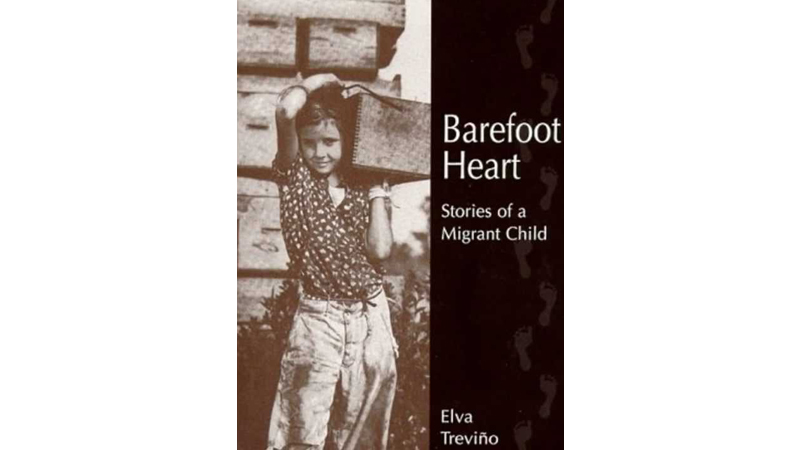 Elva Treviño Hart’s debut work Barefoot Heart, a memoir, documents her family’s experience living and working between Pearsall, Texas, and the fields of Minnesota and Wisconsin.

Elva Trevino Hart claims that the memoir has no political motives and is simply an account of her life. Because Elva ultimately went on to earn a high level of education—rare for a migrant farm worker—the memoir is considered to articulate an underrepresented voice. Havana Thursday author Virgil Suarez best expresses this sentiment when she says, “This is a beautiful book, one many of us teaching Latino/a memoir and autobiography have long been waiting for.”

At the beginning of her story, Elva explains that she never had a bed as a child, instead, she slept on a series of makeshift cots. When she is three, her family moves from its home in south Texas to work on a beet farm in Minnesota for a summer. The Treviños are so poor that they do not have a house or car of their own. They travel to Minnesota in the back of another family’s truck. Due to her young age at the time, Hart expresses a sense of adventure rather than fear of the journey.

When her family arrives in Minnesota, they are sent to a bare-bones migrant cabin with no furniture inside. Elva still has to sleep on a cot on the floor. The family exists on food bought on credit from the “migrant store” and donations from their employer, “the gringos.” Four of her siblings go to work in the fields while she and her older sister, Diamantina, are sent to a school run by nuns. Hart is not happy with this arrangement and tries to run away.

During a lull in the growing season, the family relocates to Wisconsin where the work is harder and they have to live in a barn. At the end of the season, they return to Texas earlier than the rest of the field workers so that Hart and her siblings can return to school. Her father, Apá, is very strict because he has only a fourth-grade education, and insists that his children attend and graduate from high school.

When her family arrives in Minnesota, they are sent to a bare-bones migrant cabin with no furniture inside. Elva still has to sleep on a cot on the floor. The family exists on food bought on credit from the “migrant store” and donations from their employer, “the gringos”

The rest of the story recalls the next six years spent between Texas and the Midwest. The Treviños return to Minnesota the following year in a car her father was able to buy. Her siblings continue to work in the fields but Hart is still too young, so she watches from the sidelines. There are no toys for her to play with, and she has few friends, so she amuses herself by bringing water to her family in the fields, singing songs, and playing with rocks and sticks. Sometimes at the end of the day, her family is too tired to even speak to her, isolating her even further.

Hart’s teenage siblings also struggle with the situation. They are embarrassed to work in the fields, and they resent their father, who forbids them from getting jobs as waitresses. The Treviños continue to live together in the small migrant cabin with little personal space, complicating their relationships even further.

Hart has a short-lived friendship with the farm owner’s daughter, Kit, who is an only child and also has few friends. The friendship starts to unravel when Hart realizes that Kit has all the power. Back in Texas, Hart does not feel she fits in with her peers, either, because her family now has more money than their families.

The work continues to be challenging but slowly pulls the Treviños out of poverty. They are able to build a small house in Texas after a few years of work. Her father eventually starts to earn social security and retires from seasonal labor. The family stays in Texas each summer, and, with little else to grab onto, Hart throws herself into school. She reads several books a day, is the top of her class, and plays in the school band. She excels at math because she feels she can earn an unbiased grade from her teachers in a newly desegregated school system.

At one point, Hart takes a job as a seasonal worker in a field just to experience what her family did when she was a child. Because she is not fully dependent on the work, she does not hate it, and it makes her feel guilty. She feels her life has been “easier” than that of her family. She also takes a trip to Mexico with her father, and her lack of connection with her roots drives her guilt even further.

In the final pages of the book, Elva recounts her graduation as valedictorian of her high school, which leads her to a degree in computer science at Stanford University. She lands a job at IBM where she earns six figures. She does not know how to tell her father how much money she makes, so she lies to him. After working at IBM for a while, Elva realises the work is unfulfilling. Without apparent reason, she starts to interview her parents, siblings and acquaintances about their experiences as field workers. This is when she has a revelation that as a child, she was sent to the fields to collect stories and to one day share the stories of her family, resulting in her writing the memoir.