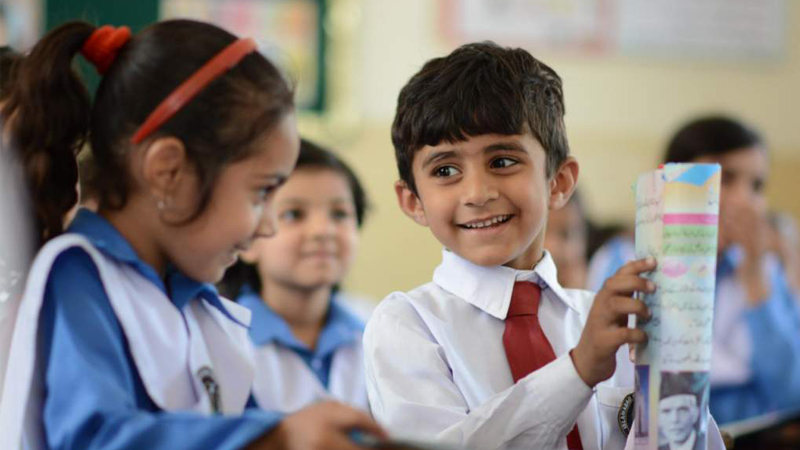 The Annual Status of Education Report (ASER) 2018 report shows promising trends in terms of access and quality as 89% children aged 6-16 are enrolled in schools as compared to 86% in 2016. These findings were made public in the report of Pakistan’s largest-annual citizen-led household based ASER Survey 2018 – the eighth ASER Survey Punjab report– launched in Lahore on Monday. ASER is managed by Idara-e-Taleem-o-Aagahi (ITA) in partnership with nine key civil society and partner bodies. As many as 3,000 educated volunteers/citizens trained as enumerators visited 36 districts in 1,070 villages based the ASER survey findings on the information gathered from 21,370 households and 57,349 children of age 3-16. For the year 2018, the ASER rural survey assessed 45,498 children of 5-16 age cohort in Language-Urdu, English- and Arithmetic competencies.

The report aims to inform about progress and continued challenges with respect to Article 25-A of the constitution making education a fundamental right for 5-16 years old children since 2010. It also ensures tracking progress towards Sustainable Development Goal (SDG) and measuring learning outcomes at the lower primary level. Released by Secretary Schools Education Muhmmad Mahmood, and representatives from PEF, PEC, universities and civil society organizations, ASER 2018 report pushes forward for a future based on an educated Pakistan as opposed to one that marginalises learning and undervalues social capital.

The report says that proportion of out-of-school children has decreased compared to 2016 (14%). In 2018, 11% of children were reported to be out-of-school.  This is good news as the SDG’s fourth goal targets have been fully endorsed by the Government of Pakistan and its provinces/areas are aligning their sector plans to the promise made both for SDG 4 (12 years of schooling) and Article 25-A (the right to education of 5-16 year old). Punjab has recorded an overall 3% increase in enrolment. Nationally, the gender gap persists in out-of-school children with more girls than boys not being enrolled or dropped out of school. However in Punjab, the percentage of girls who are out of school is the same as percentage of boys. As per ASER 2018, amongst the 11% out-of- school children (age 6-16 years), 5.5% are girls and 5.5% are boys.

The ASER Survey 2018 highlights as per past trends that children enrolled in private schools are performing better compared to those studying in government schools. 72% children enrolled in Class-V in private schools were able to read a story in Urdu compared to 68% Class V students at government schools. The difference in learning levels for English are also the same as Urdu, where 68% Grade V could read English Class II level sentences compared to 64% public sector students.

The survey highlights that in Punjab, girls are at par with boys in literacy and numeracy skills. At par with boys, as many as 57% of girls could read sentences in Urdu. Similarly, for Arithmetics, 47% of Class V girls were able to do Class II level subtraction as compared to 47% Class V boys. For enrolment, overall girls’ enrolment (rural) has been increasing since 2014, from 41% to 43% in government schools and from 42% to 44% in 2018 in private schools. If given attention, this increase in enrolment can also lead towards an increase in learning for girls- the two can reinforce one another. The foundational stage needs urgent attention and resources for implementation of lifelong learning.