No-deal or delay? Votes leave Brexit in a limbo No deal 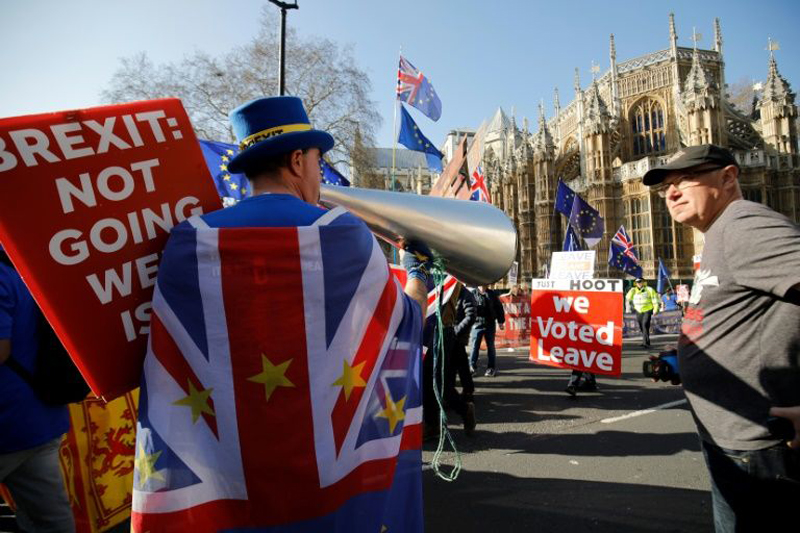 After rejecting May’s deal, British MPs voted on Wednesday not to simply leave the EU without a formal agreement — the so-called “no-deal Brexit” — although it still remains the default option. May had promised a vote to rule out this perilous option — for the time being — if her deal failed to pass through parliament. MPs went even further, backing an amendment that ruled out a no-deal in any scenario.

They fear the prospect of trade routes clogging up, the UK pound crashing and the implications for the Irish border in the event of no deal. The parliamentary vote is only advisory as the EU must agree unanimously to any alternative.

But it signals to EU officials that the one thing Westminster can agree on is that it wants an orderly divorce.

Parliamentarians will hold another vote on Thursday that could see parliament tell May to ask EU leaders for a delay to Britain’s departure.

They will vote on whether to ask for a one-off extension to the departure deadline until June 30, assuming she can get her deal through at a third time of asking by March 20, in order to give time to prepare to leave.

If she fails, then May raised the prospect of requesting a longer delay, but will need to convince sceptical EU leaders at a Council summit in Brussels on March 21. European Commission chief Jean-Claude Juncker tweeted on Monday that Britain’s exit should be completed by the May 23-26 European parliamentary vote.

Dutch foreign minister Stef Blok warned Wednesday that Britain would need to convince “each and every” EU country to grant any delay.

What such a delay might be used for is one of Brexit’s great unknowns. There are few reasons to think the different sides will suddenly stumble on a solution that has evaded them during two previous years of talks.

But two forces are expected to spring into action: groups backing a much closer EU-UK union — and ones that simply want to call the whole thing off.

A second referendum would also take a long time to organise and require parliamentary support.

May’s adamant refusal to back one means there would probably need to be a change in government and possibly early elections.

And few dare to predict what surprise British voters might spring next.

The idea of May’s deal with Brussels making a comeback after Tuesday’s fiasco might seem far-fetched.

But several factors continue to play in May’s favour and reports of her strategy’s demise might still be premature.

One is that Brexit backers are gradually realising that May might be offering their best — and quite possibly last — chance to split from the bloc.

And EU officials would like to see Britain’s status settled by the time voters across the continent elect a new European Parliament at the end of May. The two factors might convince May to propose yet another vote on her 585-page pact with Brussels in the very near future.