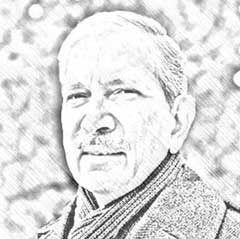 In this era of uncertainty, insurgency and terrorism are hotly debated notions. Although they may be similar in language, but they are completely different in reality. While discussing both, previous op-ed in this series has defined insurgency as a policy which highlights the power asymmetry between two aggressive and belligerent groups where the objective of the insurgents is to usurp power from the dominant group. Whereas terrorism is one of the strategies that executes this policy of insurgency. Therefore, in the sequence of events, generally insurgency will come first and terrorism second. In a way, the former subsumes the latter. That is why, even in the order of responses, nominally counter insurgency comes first and counter terrorism second. But both must be policy level discussions with clear ends and strategies in mind.

Preceding articles in this series have explained policy as a definitive course of action that is selected from of range of possible courses. Counter insurgency policy is no different. It too must be a conscientious choice of direction which pursues a galvanising end vision.

Pakistan is facing multiple and complex crises in the form of economic downturn, energy and water shortages and a forced multi-front war. Though, with its far-reaching success in the war on terror, the Pakistan armed forces have given much breathing room to the civil & political administration to now win the peace. However, there seems to be a lack of resolve from the respective departments of the government to take over and maintain the areas cleared-out and secured by the Pakistani forces. They require a rousing course of action and this is where a clearly articulated counter insurgency policy will be able to help the most!

The counter insurgency policy must take a leaf out of the rebooted national security policy which was epitomised previously as principled and peaceful survival and unswerving social and economic growth through mutual co-existence, harmonious internally and externally. The national security policy also came with its list of four policy objectives. One, exist honourably in a volatile region and ensure transparent writ of the state to protect its people from all internal and external threats. Two, convert Pakistan into an economic and social powerhouse to safeguard and increase the quality of life for all Pakistanis. Three, promote diversity, liberty, equality, and a culture of tolerance. Four, strive for regional and global peace through amicable co-habitation and adherence to international norms. The counter insurgency policy must act in unison with the national security policy and that is why it is deemed to be the extension of the first policy objective mentioned above. This contextualises the counter insurgency policy within the national security policy itself so that there is no disconnect between the two.

Keeping the former paragraph in mind, Pakistan’s counter insurgency policy can be defined as assimilate where possible, eliminate where needed. The broad aim of this policy will be to ensure that the insurgents are given a fair chance to be co-opted where feasible while knowing that they will be dealt with an iron fist where required. If one word was to represent this policy, it would be reconciliation. That is, the policy would reconcile – through assimilation or elimination – any unfavourable skewing of power between the government and the insurgents. The objectives of this policy will be threefold. One, negotiate and assimilate all willing forces and individuals. Two, defeat all non-amenable insurgents and groups. Three, win the hearts and minds of the local population to isolate militants and criminals further.

The core strategy to execute this counter insurgency policy of reconciliation can be termed SHAPE the environment. Where each letter of the word SHAPE stands for a particular operational and tactical activity. First, stop and call-off Jihad as per definition of the extreme right elements. Second, halt jihadi operations by and disband Jihadi groups. Third, announce amnesty for all except criminals and retaliatory elements. Fourth, pursue resolute operations only against the unwilling. Fifth, enlist all amenable individuals into relevant security arms.

Imran Khan’s government has done well to move against proscribed groups but sans a cogent counter insurgency policy – leveraged from the rebooted national security policy – these tactics alone are not likely to go far. This is because these actions from only a portion of the SHAPE strategy; i.e. pursue resolute operations only against the unwilling!

The Pakistani people have endured a tumultuous and difficult two decades. A lot of people have made a lot of sacrifices! It will be a pity to see the space created and shaped by the war on terror ceded unnecessarily because of a mis-aligned and mis-represented counter insurgency policy to win and maintain the peace!

The writer is a retired air marshal of Pakistan Air Force