Six months ago, when over two decades of continuous struggle in a system seeped in dynastic politics, Imran Khan finally came to power, there were gasps of apprehension from all corners.

The range of skepticssceptics was long and rich –senior political analysts and pundits, influential bureaucrats, career anchors and journalists, and so on. But their opposition to Khan and his politics never quite achieved clear articulation; it was always an inchoate blur of vague lamentations: Khan represents container politics, he is an establishment boy, he is pro-Taliban, he is cynical and doesn’t mean well, he is a megalomaniac, and so on. Each of these accusations could be dismantled in a thousand different ways, but it wasn’t like Khan’s critics were listening. AndIif their lamentations were vague, their proposals were even vaguer: some blushingly argued for the status quo, others would simply change the topic.

Today, interestingly, there is a shift in narrative. In light of recent events, there is an emerging consensus that Khan’s a statesman like none other.,Aa leader who comported himself with a combination of grit, grace and boldness of the kind we had long forgotten., andAat a time when his country was buffeted with crisis after crisis – the economy collapsing, a passive-aggressive White House, and cross-border attacks in Iran and Pulwama – the latter sending India and Pakistan to the edge of mutually assured destruction. SAnd so,it is that a man who was on the receiving end of endless vitriol, name-calling, and just bad-faith commentary, is suddenly the people’s choice for a Nobel peace prize recipient.

There are lessons in this.

First, why the sudden change of heart towards Khan? Why are we surprised he rose to the occasion? Why did we have a low benchmark to begin with especially in light of all he has achieved in life (not just for himself, but Pakistan as a whole)? And what does this say about our opinion makers? More importantly, what does it really say about us as a people? Because between cynicism and critical thinking runs a fine line, and it’s becoming increasingly obvious which side we stand on. Some would argue this cynicism has merit; Khan is backed by powers that be. For the sake of argument, let’s entertain this assumption. By this logic, Ifif we are happy with what Khan has achieved recently, especially in terms of managing foreign relations during choppy times (which includes diplomatic outreach to a chest-thumping India), doesn’t this, by association, suggest something positive about the powers that be? The main point here is that concerns around establishment’s overarching remit, while legitimate, should not fog judgment. Because clouded judgment could make the difference between change and status quo – thankfully we chose a change, despite allthesaid cynicism. 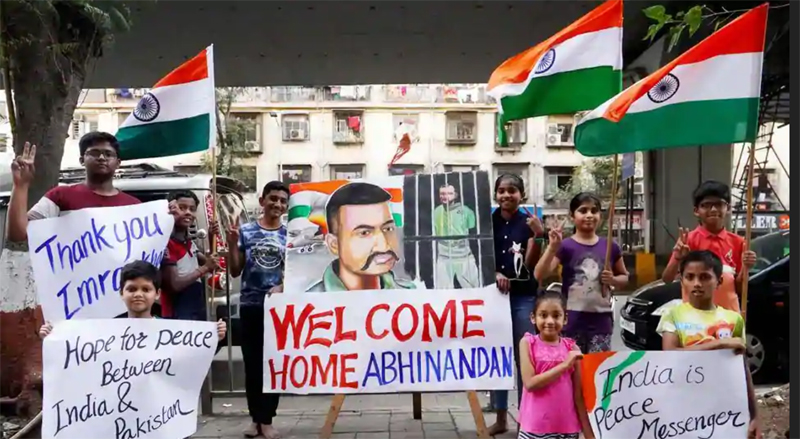 Second, if there is a clear winner in who won the moral victory in the whole Pulwama affair, it is Pakistan. Indian media tried to, and continues to try, to implicate Pakistan, but -they’ve they’ve failed miserably. Failed in how they tried to spin it (that Pulwama was instigated by Pakistan army), failed in how they reacted to it (blowing up a few trees and then scampering for dear life), failed again during blowback (lost two fighter jets, one pilot ended up in Pakistan custody where he enjoyed some teachai while he rolled his eyes over Indian media’s sensationalism), and failed in the aftermath (In poor form, Imran Khan’s peace overture of returning the Indian pilot was disgracefully dubbed as cowardice). For India, one could spend a lifetime in search of a silver lining in all of this, and yet return with nothing.

In light of recent events, there is an emerging consensus that Khan’s a statesman like none other

Third, every country has its share of hawks and doves, and which position you choose (soft or hard) depends on who you’re talking to. With India, it’s become apparent that the dovish position won’t always work (at least not with the Modi dispensation anyway). While Pakistani government should be lauded for its composure and restraint in the face of Hindutva mania, most Pakistanis (including social media influencers, artists, musicians, etc.) were all about rainbows and sunshine while their Indian counterparts were all about Jai-Hind revenge. Talk of peace and harmony is great, war amounts to death and annihilation, but for the sake of consistency, let’s not draw a false equivalence here: one side is far more extremist and disposed to war hysteria than the other. This reveals something which Pakistani liberals seldom acknowledge: that somewhere along the way, in the last decade or so, Pakistani society has become much more moderate than we acknowledge it to be. IAnd it’s equally true to say that India has gone the other way. The fact that these last few days Indian headlines degenerated into boorish punchlines is not a coincidence. Just like Modi’s ascent to power, despite his history of state sanctioned mass murder, is not a coincidence. The Indian imagination is primed – from decades of feel-good triumphalism – for the pugnacious sadomasochism one witnesses in the person of Modi, and in the conduct of Indian media at large.

Fourth, it’s past-time the world finally turns its attention to the only heaven on Earth that’s effectively been turned to hell – Kashmir. Almost 70,000 Kashmiris have been killed with,several thousandmore displaced, in the last few decades of Indian occupancy. ItKashmir is begging for a resolution; the closest India and Pakistan came to one was Musharraf’s four-point formula. This issue can no longer remain the civiliszed world’s largest blind spot, not with generations of young Kashmiris robbed, every day, of having a chance at living a normal life.

Finally, Pakistan is not out of the woods yetet-far from it. Pulwama is a reminder we need to stand as a united nation in a hostile territorneighbourhoody. But for this we must first cease to remain hostile territory ourselves; hostile to people who belong to minority groups, or lower classes, or those who bear the wounds of the state’s past indiscretions. Morest significantly, we must escape the shadow of a past that’s delivered us nothing but pain, and rise afresh as a nation where your religion, creed, or class does not define your fealty to Pakistan, your actions do. Low hanging fruits we’ve sown over the decades require immediate culling – certain proscribed agencies require dismantling, certain bad actors require arresting, and certain persecuted classes need rescuing. Let it be so that Naya Pakistan becomes one with Jinnah’s Pakistan.