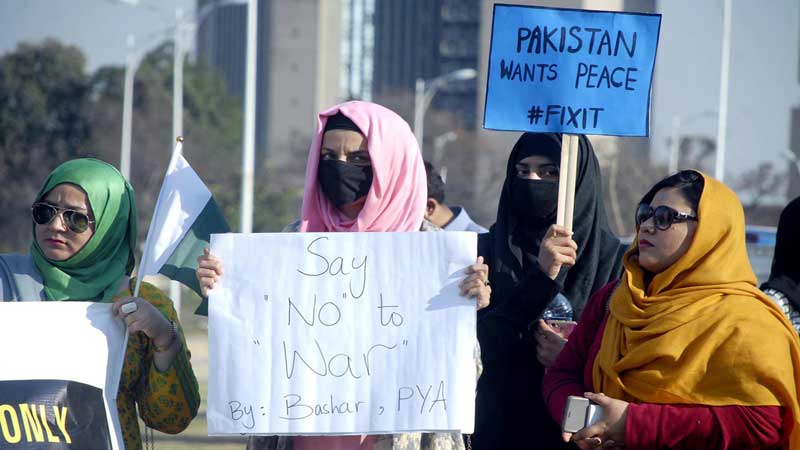 WASHINGTON DC: In response to escalating tensions between India and Pakistan, peace-lovers around the globe joined hands in a Global StandOut for Peace in South Asia in more than 20 cities across seven countries on Sunday, March 3, 2019.

In Washington, D.C., peace advocates from both India and Pakistan stood together to counter the narrative of war, hatred, and ethno-nationalism. Despite the rain and freezing temperatures in the district, a large gathering of former diplomats, journalists, activists, lawyers, economists and students met at DuPont Circle to encourage their countries to have good neighborly relations and resolve all issues through dialogue.

Sharing their messages of peace, former Pakistani Ambassador Akbar S. Ahmed narrated his poem “Love- What is it that I seek,” while author Farahnaz Ispahan recited the famous anti-war poem by Sahir Ludhianvi, “The war itself is a bitter blight. How then will it alleviate any affliction?” Sumir Lal, a former Indian editor, said the public has been on new narcotics called nationalism, which has escalated the situation and there was a strong need to de-escalate ourselves. Former Pakistani ambassador Husain Haqqani emphasized the need to reflect on the shared identities in South Asia to change the narrative of hate.

The attendees and organizers coming from varied backgrounds, shared their personal stories while calling for peace in the region. Priyali Sur, a former Indian journalist and a daughter of an Indian army war veteran, said war orders are warrants of life and death for civilians, soldiers, and their families and affects them the most. Malik Siraj Akbar, a journalist from Balochistan, said people-to-people contacts are essential and governments should invest in human development instead of war. Zaineb Majoka, who is from Lahore, said that we should not ignore the human cost of war and that both governments should use diplomatic channels to resolve these issues.

Pawan Bali, a journalist and peace-activist from Jammu and Kashmir, said everyday people are suffering the consequences of this violence, and we need to recognise them while calling for peace in the region

In Washington, D.C. the standout was supported by AdvoPak, Khush DC and students from SAIS (Johns Hopkins University).