* The new generation does not understand the history of television, playwright and TV drama writer Asghar Nadeem said 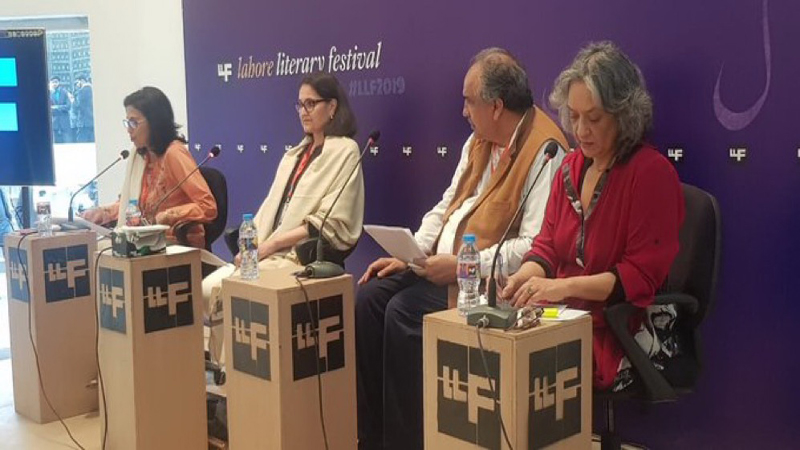 The last day of the Lahore Literary Festival 2019 saw packed halls and full gardens. One of the morning sessions was called Chand Grihan, held in Hall 2 from 11 am to 12 pm. The session was moderated by actor and director Sarmad Khoosat. Among the panelists, we had playwright and TV drama serial writer Asghar Nadeem Syed. The talk between them began with Sarmad Khoosat asking Asghar Nadeem Syed what Chand Grihan was all about.

“The new generation does not understand the history of television. During our times, there was no concept of private entities and let me tell you that TV came to Pakistan before India. India did not even know about TV dramas back then,” Asghar Nadeem said, adding that ‘Chand Grihan’ was the first TV serial to be made privately depicting the feudal culture of Sindh on one hand while Karachi life on the another.

“Chand Grihan was iconic not just because of its cast and production but because of the power of writing and storytelling, What made the serial so popular,” Khoosat asked Asghar.

“I think it was the subject and how the issues of our prevailing feudal system were addressed,” Asghar replied. 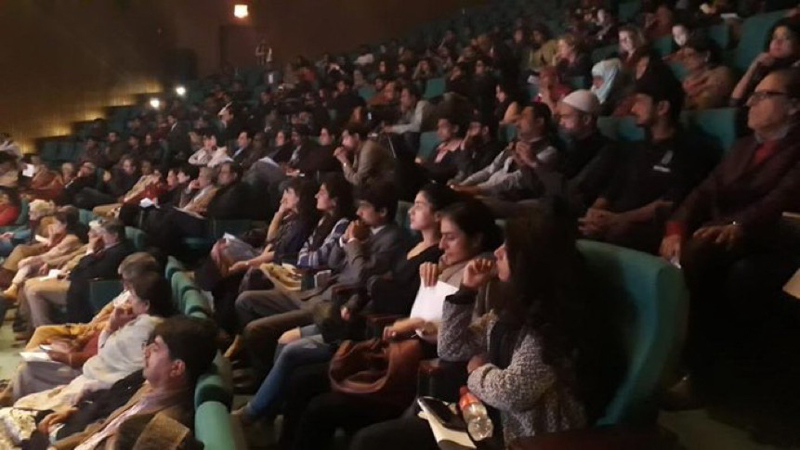 Where does the character in the stories generally come from?

“Everyone around us is a character. It has already been created. We as writers only have to nurture and foster it but the point is where we connect the character with the issue or the issue with the character,” Asghar said.

He further conversed about Faryal Gohar’s character as a courtesan and how she was different from any other character that has done similar roles, “She was an educated lady!”

Khoosat added that the storyteller or a novelist usually leaves behind clues in their initial works and the rest is just an extension, elaboration and growth of it. Asghar and Khoosat also discussed when and where this starting point is set. 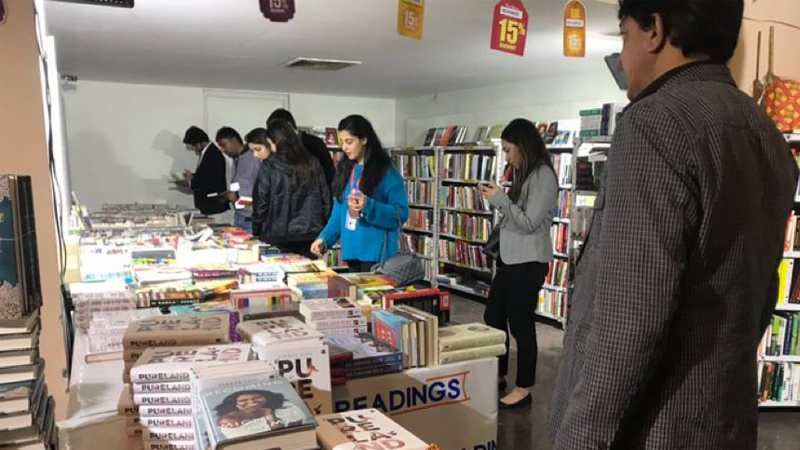 While moving on with the discussion, Khoosat talked about how every character has an action in storytelling, the main action being verbal and it seems in the dramas today that the words and linguistic strings in the script do not translate smoothly into dialogues where sometimes English and sometimes Urdu is over-enforced into the dialogues.

The session ended with a question and answer session from the audience where the last question was put up to Asghar by Daily Times.

“As you have said in the talk that Manto never went to a brothel but he was successful enough in portraying the subject. Don’t you think writers shall go through the process of experiencing it for themselves and then write only what they know?”

Asghar responded, “The literate during the decadence of France is occupied with stories of women where they sell their bodies for just a piece of bread. After reading it, it is enough for us to know about their situation than actually being there. Moreover, social awareness tells us how society treats women for example if you are in a gathering where a woman is disgraced it is enough for you to know how they are treated.”

According to Orsini, some writers use a mixture of different languages in their work because they want to show their readers that they also know about these languages. For example, if a writer uses Persian phrases in his Urdu work that means he wants to show his readers that he also knows Persian very well

The session ended with Khoosat’s last words that said, “It is all about being in that ‘state’ which has more to do with the heart and the soul.”

While speaking exclusively to DT.

The third and last day of the Lahore Literary Festival also attracted a large number of people from different walks of society as all the halls of Alhamra were jam-packed with the audience during different sessions held on Sunday. A huge number of literary figures, artists and journalists attended the last day of LLF while the people of Lahore also thronged the halls of Alhamra to attend the sessions. Live music on different instruments was also being played at the lawns of Alhamra that was mesmerizing the audience and there were also different book stalls established there. 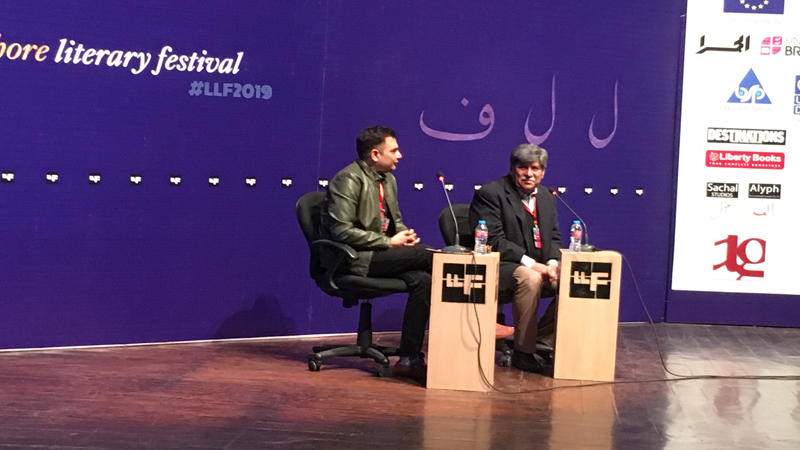 The second of the many sessions held was one that caught our attention.

Titled Reading in Multilingual Societies, the keynote speaker highlighted the different aspects of multilingualism as she said that it‘s essential to be multilingual these days keeping in view the multifaceted society where people speak different languages.

The session was held from 12:15 pm to 1:15 pm. It was held in Hall 5 and talked about the circulation of literary works of minority languages in multilingual societies.

Francesca Orsini from London University School of Oriental & African Studies was the keynote speaker in the session. She‘s a professor of Hindi and South Asian Literature and she was also associated with Cambridge University in the past and can speak both Urdu and Hindi with fluency. “The status of languages change after almost every 50 years and one language takes words from the other language between this time and therefore, one has to be multilingual,” Orsini said.

She said in her discussion that Urdu was made a legitimate language in the 18th Century by ghazal poets of Delhi as Urdu had earlier derived many words from Persian in it. 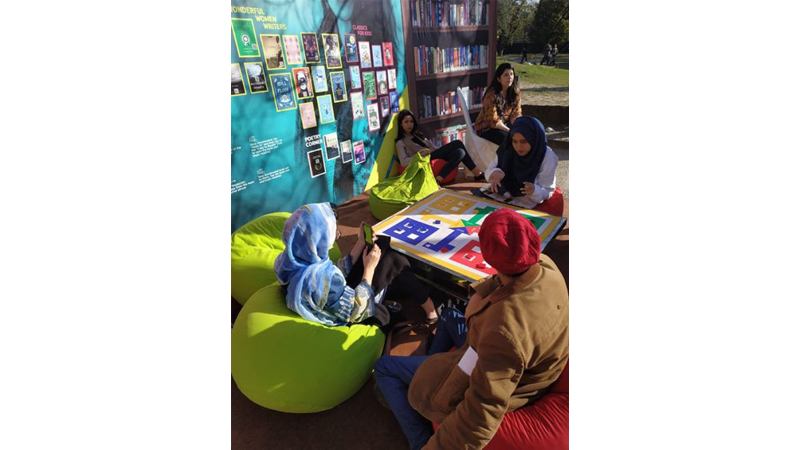 “Yes, it‘s true that some languages are important for socio-economic progress but it‘s not the end. One shouldn’t close the doors of other languages in order to learn only the language that is meant for socio-economic progress,” she said. According to Orsini, some writers use a mixture of different languages in their work because they want to show their readers that they also know the other languages. For example, if a writer uses the phrases of the Persian language in his Urdu work that means that he wants to show his readers that he also knows the Persian language very well. During her conversation, Orsini also recited several couplets in fluent Urdu and Hindi languages and her fluency really mesmerised the audience.

“I started with the reading of European literature first and then I decided to read the literature of Urdu, Hindi and Persian and then my interest developed in these languages rapidly,” she added.

“We should give respect to all the language because speaking one single language will no more work due to multifaceted society,” she said.

She was of the opinion that the concept of one country and one language is really problematic in our societies and it is also an issue even in Europe. In her concluding remarks, Professor Orsini said that our states should also avoid enforcing one single language because it is now a reality that multilingualism wouldn’t go anywhere because it is still intact and here despite repeated attempts in the last 70 years to eliminate it. 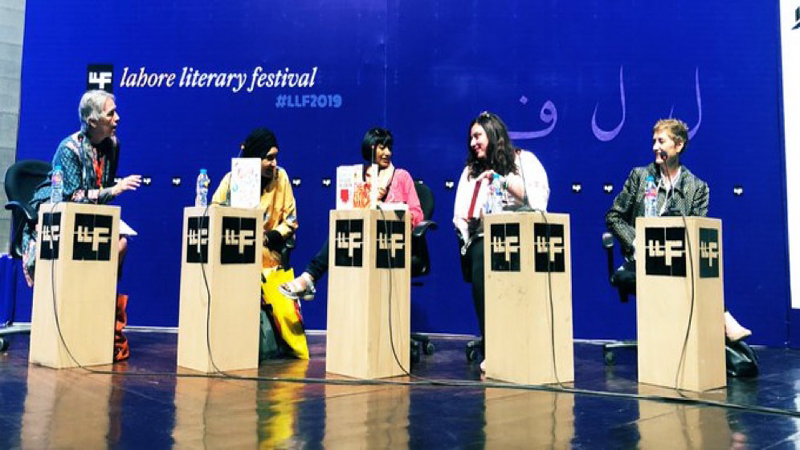 Dr. Sabyn Javeri said that although Urdu literature is very rebellious and creative in nature yet we prefer to seek English because it‘s considered as the language of opportunities and progress. She said that English still remains the language of state here in Pakistan because of the colonial legacy prevailing here and other parts of the world.

“It‘s a reality now that we live in multilingual society and therefore we should celebrate the multilingualism with full zeal,” Sabyn, who holds a Ph.D. in creative writing and is an award-winning short story writer.