* The running time of the film is two and a half hours and is about the joys, sorrows, a plethora of emotions and motivation for children 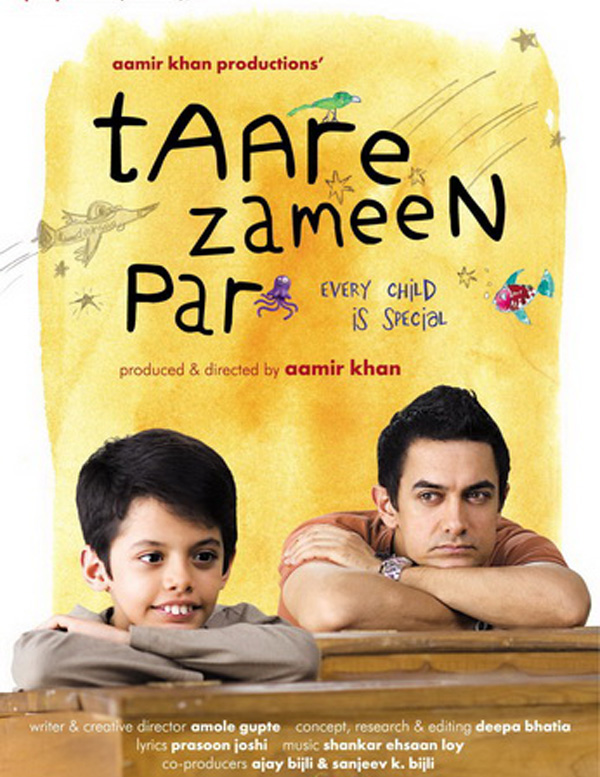 ‘Taare Zameen Par’ was a Bollywood film which was released on December 21, 2007, written by Amole Gupte and produced and directed by Aamir Khan.

This movie is a great support for the parents who time and again fail to understand their children and their careers. The movie has a total of eight main characters. Aamir Khan is a teacher called Ram Shankar Nikumbh and Darsheel Safary is a nine-year-old student in the movie. His name is Ishaan Awasthi. Sachet Engineer is the elder brother of Ishaan who helps and supports him. His name in the film is Yohan Awasthi. Tisca Chopra plays the mother of Ishaan named Maya Awasthi and Vipin Sharma is Ishaan’s father by the name of Nandkishore Awasthi. MK Riana is the principal of a boarding school and Tanay Chheda is Ishan’s friend named in the movie Rajan whose one foot is damaged.

The running time of the film is two and a half hours and is about the joys, sorrows, a plethora of emotions and motivation when it comes to children. It also describes a lot of things for children to gain such as, what is to be done essentially and why? Likely, Khan wisely gave a cover photo to this movie for the sake of clearing what this movie is all about. Even though, this is the only movie titled internationally as ‘Like Stars on Earth’. There is a big reason behind this title; it says that every child is a star in this world, but no one clearly knows where the star shines.

On the other hand, there is favouritism between the children because of which a majority of them get depressed. It is called a dilemma all across the globe for many children have committed suicide just because of getting less attention and care from their parents when they are compared to their other siblings. Favouritism is even done by teachers who only become attentive to a few students they like.

What I fail to understand is that how come parents indulge in acts that can ruin their child’s life and not realise that their support can mean the world to them? As in this movie, Ishaan Awasthi is always ignored but his brother is supported for his every decision.

His brother is praised because of his good grades in school, but Ishaan suffers as his talent lies elsewhere.

This was the only film that moved me to the extent that I recommended it to every parent. The film talks about how a child should not be beaten up rather be given attention, love and motivation. Whenever, a child does a mistake unwillingly, everyone tries to scold them. No one assumes that children have small hearts and minds which cannot bear these harsh words and get psychologically ill. The medicine for this disease is love that Ishaan’s father fails to provide and that was provides by Khan as a teacher, friend and brother.

What I fail to understand is how parents can indulge in acts that can ruin their child’s life and not realise that their support can mean the world to them. As in this movie, Ishaan Awasthi is always ignored but his brother is supported for every decision

Furthermore, this movie highlights that nature is an attractive perception that attracts everyone towards it, and compels the people to always be busy with it. Beside this, Jajan only understood Ishaan’s feelings and time and again encouraged him, since he had a wrong concept that every child, who does naughtiness, would be sent in the boarding school.

Moreover, every child born in this world has something unique in them which becomes the ultimate cause of their conversion into great personalities like Thomas Edison, Bill Gates and other professionals who successfully achieved their goals. This movie portrays the same that every parent wants that their child should become an engineer, doctor or a businessman, but no one ponders that their child can be famous in what the interests of his is, not in what we prefer but what they choose.

Ishaan faces multiple troubles when his parents could not understand what could actually be done for him for his education and send him off to a boarding school relying on the punishments which are commonly given in such schools by teachers where no parent can interfere. But, was that what he preferred? Ishaan relies on his own understanding of the text rather than giving bookish replies.

Khan’s entry gives Ishaan a new life and saves him from destruction. He understands what Ishaan needs and takes extra care of his education and soon Ishaan becomes a great student. Khan conducts a chart competition whose winner is Ishaan from the entire school, even outshining his teachers’ work. Ishaan’s potential lies in art.

Thus, this movie should be watched time and again to revise what mistakes we are doing for not understanding our generation who really need help and especially, parents need to have a glance on this movie. It would, for sure, bring numerous changes in our approach towards handling the young generation when it comes to deciding what they are capable of to be in future.

‘Taare Zameen Par’ is a 2007 Indian drama film produced and directed by Aamir Khan. The film explores the life and imagination of Ishaan, an eight-year-old dyslexic child. Although he excels in art, his poor academic performance leads his parents to send him to a boarding school. Ishaan’s new art teacher suspects that he is dyslexic and helps him overcome his disability. Darsheel Safary stars as the eight-year-old Ishaan and Khan plays his art teacher. Creative director and writer Amole Gupte initially developed the idea with his wife Deepa Bhatia, who served as the film’s editor. Shankar-Ehsaan-Loy composed the film’s score and Prasoon Joshi wrote the lyrics for many of the songs. Principal photography took place in Mumbai and in Panchgani’s New Era High School and some of the school’s students made appearances.

The film made its theatrical debut in India on December 21, 2007 and UTV Home Entertainment released a DVD for Indian audiences in 2008. Disney’s later release of the international edition DVD marked the first purchase of distribution rights for an Indian film by a global company.

‘Taare Zameen Par’ has received numerous awards, including the Filmfare Award for Best Film for 2008 and the 2008 National Film Award for Best Film on Family Welfare. It was India’s official entry for the 2009 Academy Awards Best Foreign Film, but did not progress to the short-list.