* Despite being a distinguished sportsman, he was known to be a very humble human being 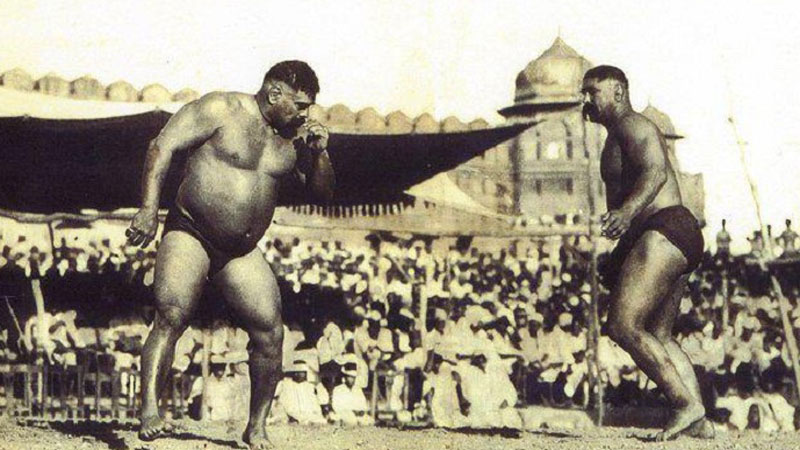 Today, let me take you to a famous but forgotten legend of Lahore, Gama Pehalwan, a wrestler! He was known all over the world as Rustam-e-Hind (Champion of India) and Rustam-e-Zamana (Champion of the Universe) because of his wrestling skills which were matchless in those times. He was such a celebrated and renowned wrestler that these titles given to Gama Pehalwan cannot do justice in describing his abilities of wrestling. You can imagine his popularity and reverence that even so many years after his death, every wrestler in India and Pakistan aspires to be like Gama Pehalwan who was the undefeated legend of this region. The most amazing fact about Gama Pehalwan is that throughout his life he never lost a single wrestling game and remained unbeatable by other players of the world who claimed to defeat him.

Despite being a distinguished sportsman he was known to be a very humble human being and had always thought beyond the borders of religion, caste, creed and all other aspects that divided the human beings. The example of it came during the bloody riots that marked the partition of India and Pakistan where Gama who was a Muslim saved hundreds of Hindus of his colony in Lahore from the violent mobs.

Coming to who he was and his family, let me tell you that the original name of Gama Pehalwan was Ghulam Muhammad and he was born in a Kashmiri family in Amritsar on May 22, 1878. He remained undefeated for more than 50 years and that became the point of his popularity. His training methods and achievements of strength also played a role in his fame. Gama Pehalwan was initially trained by his father, who was also an unbeaten wrestler and his training started at a very young age.

Gama was first noticed by the people when he appeared at a strongman competition at the age of ten. With more than 400 wrestlers and participants in that competition Gama Pehalwan managed to secure his place among the last 15 wrestlers and as he showed unbelievable enthusiasm and energy at that age, he was announced a winner of that competition.

The original name of Gama Pehalwan was Ghulam Muhammad and he was born in a Kashmiri family. He remained undefeated for more than 50 years and that became the point of his popularity

Nine years later Gama issued a challenge against the Indian wrestling champion Raheem Baksh who was much taller than him as Gama himself was of 5feet and 7 inches and fought with a 7ft tall opponent.

Historians say that Rahim had an advantage of height against Gama in that match but still Gama managed to win the battle which marked the turning point in his career. This was the time Gama Pehalwan gained status and became prominent and later people from far flung areas loved coming to see his wrestling matches.

Let me tell you another interesting story. In 1910, when Gama flew to England with his wrestler-brother Imam Baksh, he was not allowed to enter the arena of the international championship. He challenged that he could defeat any wrestler there and then managed to defeat the American champion Benjamin Roller in just 1 minute, 40 seconds. This was the strength of the Great Gama.

The next opponent was Stanislaus Zbyszko, a Polish champion, who realised that Gama was too powerful for him and stayed pinned to the mat for the next 2 hours, 35 minutes. This was seen as disgraceful by the wrestling community and Gama challenged Zbyszko to a rematch for which he didn’t show up. So, Gama was finally named the international champion. 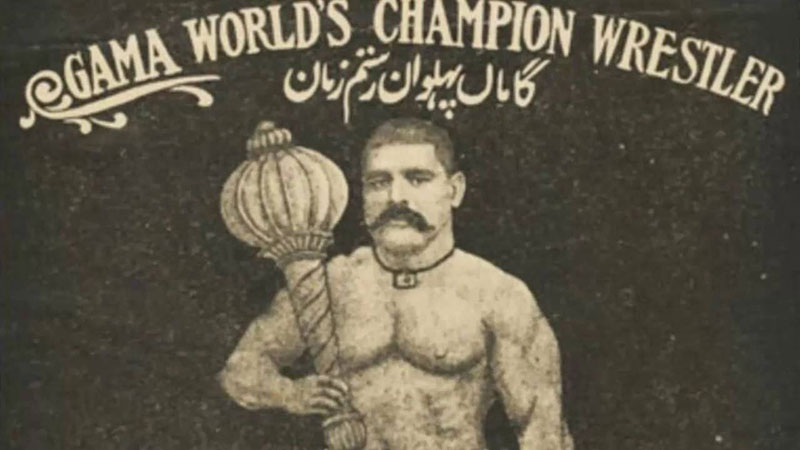 Gama travelled to Baroda to compete in wrestling at the young and enthusiastic age of 22. There he couldn’t find a match and decided to do something else and so he lifted 1,200 kilogramme stone up to his chest and dropped it down after carrying it for a while. It was 2.5ft in height and it’s still kept at Baroda Museum for display. This act was equivalent to lifting two baby elephants together.

The Great Gama shifted to Lahore in 1947 and stayed here until his death. Gama has a long knitted connection with Lahore and he is the most celebrated wrestler of this city. He lived near Mohni Road and did wrestling in one of the wrestling arenas inside Bhatti Gate of Lahore Walled City. Several wrestling arenas have faded out with the passage of time but the people of the city still know the name of Gama Pehalwan. Gama’s connection with walled city Lahore cannot be forgotten and even today the wrestlers look up to the Great Gama and take him as the role model.

We generally know that wrestlers are tough and muscular, but Gama was way beyond words and thoughts. Would you believe that his exercises included 5,000 squats and 3,000 push ups daily. Now let me tell you the diet he took which is a mind opener for the new generation who depends on supplements and steroids for building up body and stamina is gyms. Gama would daily have 10 litres of milk, half a kilogramme of butter, six chickens and four kilos of fruit and a pound and a half of crushed almond paste made into a tonic drink. This was the diet of most of the wrestlers in those times but now unfortunately the new generation has shifted to artificial methods which are harmful for them.

Lahore could not sustain the fame of this undefeated legend and with the passage of time people forgot his services and pride which he brought to this city of Lahore. At present, most of the wrestling arenas of the city are dead and converted into other buildings. Wrestling itself is now vanishing away and I wish that the government while investing so much in other games should look into the revival of wrestling as well and there should be a competition dedicated to Gama Pehalwan. Even the Akharas or wrestling arenas where Gama fought should be named after him. This is a dying intangible culture of Lahore and its revival is needed.