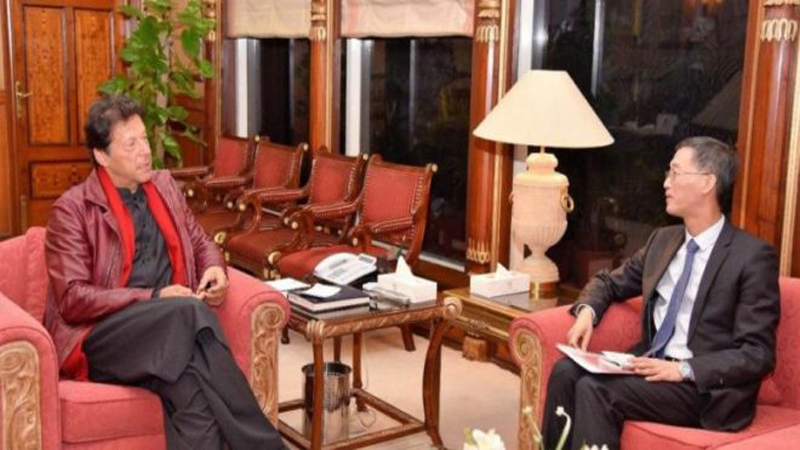 The ambassador updated the prime minister on the CPEC projects and said Pakistan and China were the closest friends and partners, a PM Office statement said. The envoy also reaffirmed his government’s resolve to work closely with Pakistan to further strengthen the bilateral relations.

Later talking to media, the ambassador termed his meeting with the prime minister ‘very successful’. He said he had conveyed that the Chinese leadership, government and the business community were encouraged by the vision, agenda and priorities set by Prime Minister Imran Khan and his government like the ease of doing business, clean and green Pakistan and opening up of Pakistan’s economy to the world. He also lauded the government’s policies for inviting direct and indirect investment to the country besides enhancing its exports.

The ambassador said he had assured the prime minister that China would continue to be a strong partner of future development of Pakistan. “We have every confidence that under the leadership of Prime Minister Imran Khan, Pakistan will achieve its destination of prosperity and development,” he remarked.

During the meeting, the prime minister said Pakistan and China were close friends and strong partners. Praising the vision of President Xi Jinping for socioeconomic development of China, he said Pakistan could learn much from the Chinese experience for the social uplift of the people of Pakistan. The prime minister viewed that CPEC has added a new dimension to bilateral ties and reiterated Pakistan’s commitment to its timely completion. He expressed satisfaction over the significant progress made on the CPEC projects.

The prime minister also underscored his priorities for transfer of technology and capacity building in agricultural sector, which will have a direct impact on poverty alleviation in rural areas.

Separately, Prime Minister Imran Khan chaired a high-level meeting on the visit of Saudi Crown Prince Mohammad Bin Salman and reviewed the arrangements regarding various engagements of the crown prince and his delegation during their two-day stay in Pakistan. The meeting decided to give a historic welcome to the crown prince and his delegation as they arrive here on February 16 on an official visit at the invitation of Prime Minister Imran Khan.

The prime minister told the meeting that the present-day Pakistan was providing maximum opportunities to foreign investors. He said that all possible facilities would be provided to promotion of investment and business in the country. He said the government was ensuring provision of all necessary facilities to business and easy visa. He said Pakistan would play its role for durable peace in the region, adding this was the new Pakistan where the whole world was witnessing.

Meanwhile, Prime Minister Imran Khan said the continuing winter rains were worth billions of rupees to the national economy besides replenishing the water table and glaciers. “We should all thank Allah Almighty for the continuing winter rains that are worth billions to the economy apart from replenishing our water table and glaciers plus countering air pollution,” he said in a tweet. “InshaAllah we will have a bumper wheat crop this year,” he hoped.