* The movie is set out several centuries into the future, the year is 2563 and more than half of the world has been destroyed by The Fall; a great war that took place some 300 years ago 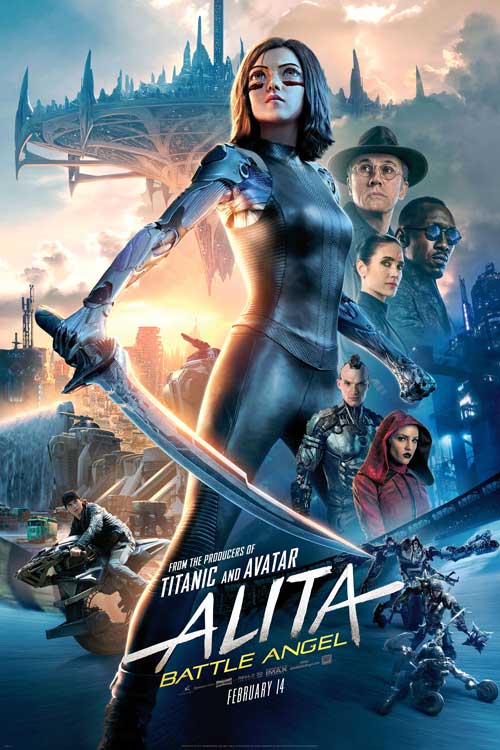 ‘Alita – Battle Angel’ released in Pakistan on Friday and has taken the film fanatics by storm.

This Robert Rodrigues directed and James Cameron produced film is a visionary masterpiece and a visual treat for all the sci-fi movie fans. James Cameron, being a filmmaker has never failed to surprise his audience with his startlingly original cinematic visions, bold script choices and technical wizardry. The two masterminds came together for an epic 3D adventure with its eye popping effects and jam packed action sequence. An adaptation of the ever famous Japanese Manga series ‘Gunnm’ by Yukito Kishiro, the film is an epic adventure into the future.

The movie is set out several centuries into the future, the year is 2563 and more than half of the world has been destroyed by The Fall; a great war that took place some 300 years ago. The movie revolves around the cyborg Alita, played by Rosa Salazar, who is shown to wake up in the future with no memory of her past life. She is taken in and nursed back to health by Dr Dyson Ido, played by Christopher Waltz, a kind but mysterious doctor who helps her adjust to her new life in this dystopian world. She befriends the street smart Hugo who helps her remember her dark past, while at the same time Ido is trying to shield her from it. Soon, she discovers her in human strength and physical abilities, and sets out on a journey to take on this dark and injustice world full of inhumanity.

‘Alita – Battle Angel’ lives up to the hype it created with the trailers a few months ago. In a world of never ending adaptations and sequels, the movie serves the potential of the original and leaves you craving for more. The protagonist, with the big almond eyes and traditional anime facial features is completely digitalised and put into the frame. However, the digital wonder does not put Salazar’s heartfelt performance that brought this character to life. The film does a spectacular job in capturing every facial expression and rendering it digitally. A powerful avenging angel, with some kickass moves and just the right amount of emotional touch, Alita is the stirring hero that everyone falls in love with.

The film lives up to the hype it created with the trailers a few months ago. In a world of never ending adaptations and sequels, the movie serves the potential of the original and leaves you craving for more

The visual snazziness is way ahead of its time and with the lifelike CGI, nothing less you would expect from a Cameron film. Despite this eye candy for the tech savvy audiences, the film provides us with just the right blend of action, drama and romance. The movie ends with a cliff-hanger, hinting at a possible sequel. It also leaves us wondering about our near possible future and the possibility of losing our humanness to this world.

The film does a great job in leaving the audience at the end of their seats, make them feel, give them action packed sequences and be emotionally involved in Alita’s journey. With truly impressive visuals, exciting plot and an engaging script the film is an enjoyable ride for the viewers.

Originally announced in 2003, production on and release of the film were repeatedly delayed due to Cameron’s work on ‘Avatar’ and its sequels. After years of languishing in development hell, Rodriguez was announced as the film’s director in April 2016, with Salazar being cast the following month. Principal photography began in Austin, Texas, in October 2016, lasting through February 2017.

‘Alita – Battle Angel’ premiered at the Odeon Leicester Square on January 31 and will be released in the United States today (Thursday) by 20th Century Fox in Real D 3D, Dolby Cinema and IMAX 3D formats. The film received mixed reviews from critics, with praise for its visual effects, action sequences and Salazar’s performance, with some calling it one of the better manga adaptations, while criticism was directed at the “muddled” screenplay and the set-up of sequels.