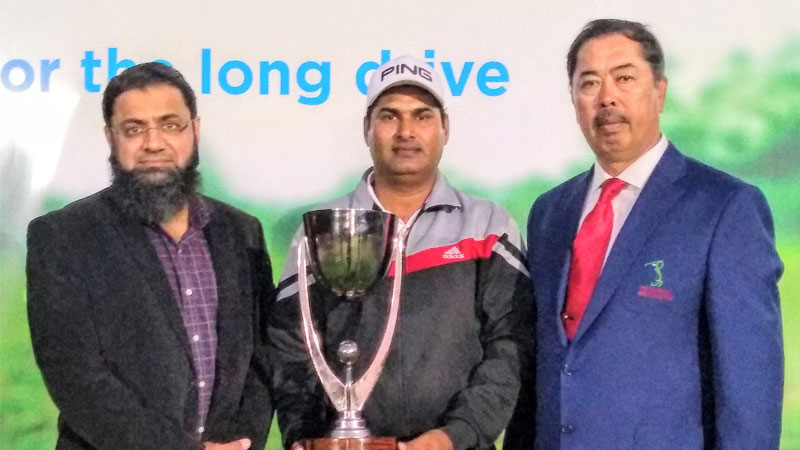 A highly successful edition of Chevron-DHA Karachi Cup All Pakistan Open Golf Championship concluded following an exciting finale at the picture-perfect course of the Defence Authority Country and Golf Club here Sunday. Lahore’s Matloob Ahmed successfully defended his title with a three-day aggregate of 204 (-12). Matloob, who carded a superb round of 68 on the final day, won by a big margin of eight strokes as his biggest challenger Muhammad Shabbir was unable to click when it mattered most. Shabbir carded 74 on the final day and finished on a joint second spot with Shahid Javed Khan, both finishing with 212 (-4).

Taimoor Khan won the amateurs title ahead of Zohaib Asif while in the amateurs’ net category Asadullah reigned supreme while Joon Park was the runner-up. Asad Khan won in the junior professionals’ category while Muhammad Akram won the senior professionals title. Aania Farooq and Omar Khalid won the women’s and juniors titles respectively while Humera Khalid and Hamza Gheewala were the runners-ups. Syed Navaid Ali reigned supreme in the seniors’ category while Azhar Abbas was the runner-up.

Col Shahid Mehboob prevailed in the veterans’ category while Asghar Ali Khan was the runner-up. Abdullah Badar won the masters event ahead of Sameer Saeed. The tournament carrying a prize basket of Rs 2 million was played from February 7-10 with the main professional event taking place over 54 holes from February 8-10.

Top professionals and amateurs from all over the country were part of the stellar cast of the tournament sponsored by Chevron Pakistan Lubricants (Private) Limited, a manufacturer and distributor of premium lubricants in Pakistan. This tournament is a unique yearly event of Pakistan Golf Federation calendar, which is counted among the most prestigious golf events in Pakistan. More than 400 golfers featured in the tournament including leading professionals and amateurs of the country. Other events which were played during the tournament included Senior Professionals, Seniors, Veterans, Ladies, Juniors and Masters. Muhammad Najam Shamsuddin, Country Chairman & Area Business Manager, Chevron Pakistan Lubricants (Private) Limited, hailed the successful hosting of the event. “It was great to see so many golfers competing in the Chevron-DHA Karachi Cup All Pakistan Open Golf Championship. It was a highly successful tournament. Chevron Pakistan Lubricants (Private) Limited will continue supporting community events and activities like this tournament in the future,” he said.