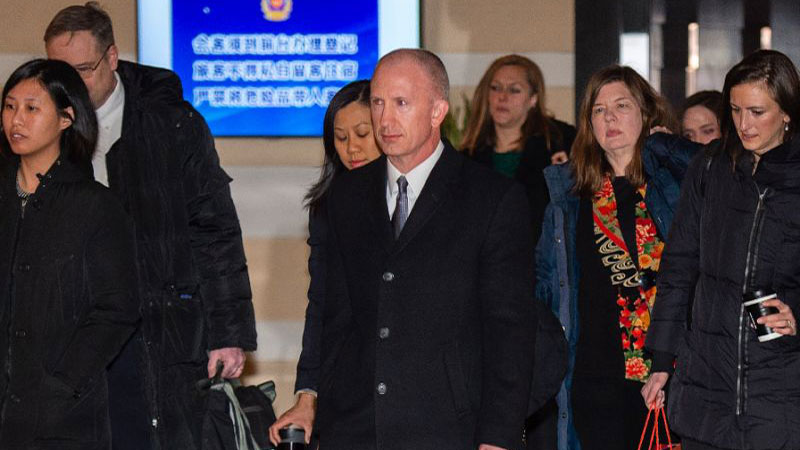 Top US economic officials will travel to the Chinese capital this week for the third round of talks on Thursday and Friday, but deputies had already arrived and the White House said preparatory discussions were due to begin Monday.

Failure to agree a deal between the two economic superpowers before March 1 would see punitive US duties on $200 billion in Chinese goods more than double.

“There’s a sense of urgency to this round,” said Jeffrey Halley, senior market analyst at OANDA.

“If no deal is agreed by then, a belligerent President Trump and US Congress will be more than willing to simply extend the trade war so China will need to make the first move if they are to reach a detente,” he added.

Analysts say imposition of the tariffs could weaken the global economy.

US President Donald Trump said last week he does not expect to meet his Chinese counterpart Xi Jinping before the deadline expires, quashing some optimism.

Hong Kong was up 0.6 percent in the afternoon session, with social media and gaming giant Tencent seeing healthy gains, along with smartphone component makers such as Sunny Optical Technology and AAC Technologies.

Tokyo was closed for a holiday.

It cited the trade row as one of four “clouds” overshadowing the global economy, along with Brexit uncertainty, the accelerated slowdown in China and financial tightening.

“The bottom-line — we see an economy that is growing more slowly than we had anticipated,” IMF managing director Christine Lagarde told the World Government Summit in Dubai at the weekend.

Adding to market trepidation is the spectre of a repeat of the 35-day partial US government shutdown that ended January 25 — the longest in the country’s history.

Key Republican negotiator Richard Shelby blamed Democrats for another impasse over immigration at the weekend, in talks that have been defined by Trump’s demand for funds for a border wall.